Cardinals vs. Red Sox: Here's the obstruction rule you're looking for

I don't relish World Series Game 3 ending like it did, but the St. Louis Cardinals' win appears to be justified by the rules.

Share All sharing options for: Cardinals vs. Red Sox: Here's the obstruction rule you're looking for

99 percent of the year Major League Baseball's rulebook sits dormant, waiting for angry little-league parents to bring it up on their phones. Then comes the postseason and the World Series. Last year the Cardinals elucidated all kinds of readings of the infield fly rule; this year, their Game 3 win was capped by the permanently obscure obstruction rule. You're probably looking for it. So were we. Here's the obstruction section. 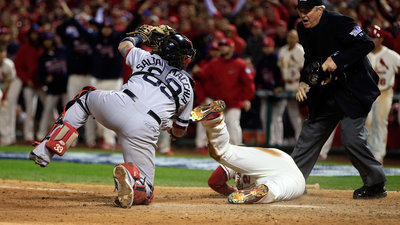 Cardinals win on a play I won't try to blurb.

Here's a relevant portion in the definition of terms a little earlier on (I pulled it from the PDF, which you can download here):

Rule 2.00 (Obstruction) Comment: If a fielder is about to receive a thrown ball and if the ball is in flight directly toward and near enough to the fielder so he must occupy his position to receive the ball he may be considered "in the act of fielding a ball." It is entirely up to the judgment of the umpire as to whether a fielder is in the act of fielding a ball. After a fielder has made an attempt to field a ball and missed, he can no longer be in the "act of fielding" the ball. For example: an infielder dives at a ground ball and the ball passes him and he continues to lie on the ground and delays the progress of the runner, he very likely has obstructed the runner.

That would seem to describe Will Middlebrooks and Allen Craig's situation perfectly—but I'm sure reasonable people (and unreasonable people, for that matter) will disagree.