How are the St. Louis Cardinals defying the gravity of their run differential?

The Cardinals are in first place with an 83-67 despite a run differential of just +10.

Share All sharing options for: How are the St. Louis Cardinals defying the gravity of their run differential?

After weeks of chasing the Brewers in the National League Central, the St. Louis Cardinals caught up to Milwaukee on August 31 before taking sole possession of first place on September 1. Making the feat uncanny was the Cards' -7 run differential on the day they ascended to the top of the Central. By Pythagorean expected record, the Redbirds should have had a losing record, yet there they were, 73-63, alone in first.

Like so many principles in modern baseball statistics, Pythagorean record got its start in the mind of Bill James. The notion that a team's run differential is a good indicator of how well they've played—and thus how many wins they ought to have—makes sense on a gut level. Baseball is about run scoring and prevention. The better a team is at plating runs and keeping the other team from doing the same, the better their record (as a general rule). Pythagorean record is based on the premise that teams will win in rough accordance with their talent levels and that a team's talent level is best represented by its run differential.

James's initial formula spurred the use of the term Pythagorean record because it closely resembled the Pythagorean Theorem. While James's formula had a high correlation with teams' actual win-loss records, it had a tendency to be off by a game or three with some regularity. And so other minds tinkered with the formula to see if they could make it even more accurate. While Clay Davenport and Keith Woolner as well as others have come up with more elegant methods of calculating the exponents to be used in the formula, this post will use the formula that Baseball-Reference uses to calculate a team's expected winning percentage:

With the gory math out of the way, let's get back to the 2014 Cardinals. At present, St. Louis still sits alone atop the Central division standings with an 83-67 record. While a .553 winning percentage is not bad, it certainly isn't great either. To finish the season with a .553 winning percentage is to finish with 90 wins, a total typically reached by wild card berth winners. But the Cards' 83-67 record belies a +10 run differential. Teams with such a run differential typically have an expected record of 75-74. So how are the Cardinals defying their Pythagorean record?

The following chart shows the Cardinals' actual win total in blue and their expected win total by Pythagorean record in red through play on September 14. 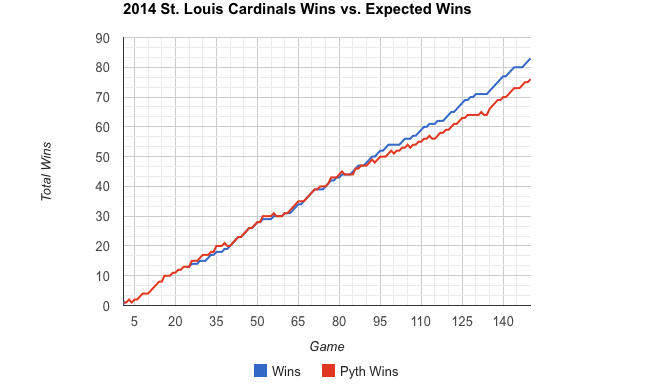 The Cardinals' actual win total began outpacing their actual win total rather recently, right around the All-Star break. Put otherwise: after the rotation was struck by health issues. Jaime Garcia and Michael Wacha both landed on the disabled list in late June, which also right around the time that the club announced Adam Wainwright had elbow tendinitis. This led to some bad losses, while the team continued to win games with comparatively lesser run differentials.

St. Louis losses have been a bit more lopsided. The Redbirds have lost 23 times in the second half of the 2014 season. The Cardinals have lost by eleven, ten, and seven runs in the second half, but by a single run just five times. The Cards have a +79 run differential in their 30 post-All-Star-break wins and -79 run differential in their 23 second half losses. So their average margin of loss during the season's second half of 3.43 is larger than their average margin of victory (2.67).

The Cards have managed to defy the gravity of their Pythagorean expected win total during the season's second half. Over an extended period of time, there wouldn't be much reason to expect them to continue to do so. Thankfully, there are just two weeks left in the season and the combination of ten Cards wins and Pirates losses and eight St. Louis wins and Milwaukee losses will lock up a second consecutive division crown. Pythagorus be damned.