A closer look at the hitting of the 2014 St. Louis Cardinals

Let's take a closer look at one specific angle of the 2014 Cardinals offense: hit percentage by pitch location.

Share All sharing options for: A closer look at the hitting of the 2014 St. Louis Cardinals

With 15 games remaining in the 2014 regular season, it is nearly impossible to provide a comprehensive description of the St. Louis Cardinals offense. Per Fangraphs, they are 21st in the MLB in runs scored with 564, and their wRC+ of 96 is 15th overall. Though neither come all that close to last season's numbers (2013: 3rd in runs scored with 783 and 7th in wRC+ at 104), both are pretty solid improvements from as soon as just one month ago. Well, coming off seven total runs scored in three straight losses to the Cincinnati Reds, I decided that focusing on the offense, in some manner at least, was a good route to go for the Friday VEB Daily post.

As a fan of Baseball Savant, I chose to look at one specific angle of the 2014 Cardinals offense: hit percentage by pitch location, broken down into three zones—inside, outside, and middle. For the sake of this post, I looked specifically at the nine core hitters (instead of eight, so that I could include both Jay and Bourjos), and cumulatively, this is how the hit percentages separated out:

As you can see, nearly half (46%) of this team's hits in 2014 have come on pitches in the outside zone—roughly 20% higher than both the inside and middle zones. In my opinion, this is very helpful when trying to hypothesize the approach Cardinals hitters take when stepping into the batter's box. Of course, after seeing this pie chart, some will likely think, "Is this why the team has had such a drop in home runs (a total of 95, 29th in the MLB) in 2014? It's easier to pull an inside pitch for a home run than clear the fences to the opposite field, right?" On this matter, I believe personnel (the hitters) is the biggest contributing factor (the Cardinals do not really have a "big bopper," per se), but after seeing the percentages shake out the way they did, I definitely believe hitting approach plays some sort of role as well.

Before I get into individual hitting percentage breakdowns for the players, let me briefly discuss one possible talking point that will likely be brought up in the comments. Per Baseball Savant, Cardinals hitters have faced nearly 16,000 pitches in 2014. 31.5% (4,973 out of 15,794) of those pitches have been in the inside zone, 55.6% (8,786 out of 15,794) of them have been in the outside zone, and 12.9% (2,035 out of 15,794) have been in the middle zone. Considering they have faced nearly 4,000 more pitches in the outside zone compared to the inside zone, one could make the argument that this is the reason the team has more hits on outside pitches, and absolutely nothing to do with the approach hitters are taking. This just may be the case, but the fact that the middle hit percentage is nearly identical to the inside hit percentage despite having 3,000 less pitches puts this thought process into question, in my opinion. And yes, I know that hitting pitches in the middle part of the plate is easier.

Looking at the players... 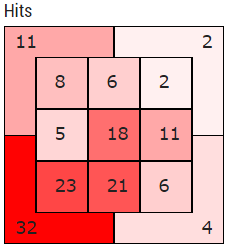 Bottom line: Carpenter faces a ton of pitches (accounting for nearly 18% of the team's total in 2014), and 65% of them fall into the outside zone. When you combine this with his contact rate and his ability to shoot balls the other way, it makes sense that 53% of his hits have come on outside pitches this season. 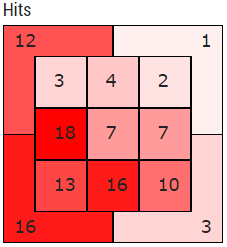 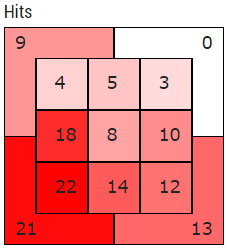 Bottom line: Nearing 35 years of age, it is apparent that opposing pitchers are attacking Holliday on the inside part of the plate. Is Holliday dealing with some age-related decline in 2014? Unfortunately, this appears to be the case, but considering he is the only Cardinal with a higher hit percentage on inside pitches, I don't think his bat speed has decreased to a point where any of us should be all that worried. Just look at those forearms. They're in prime condition. 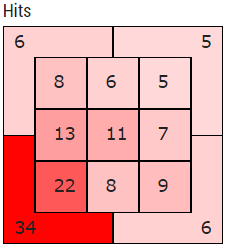 Bottom line: At 59.3%, Adams has the highest percentage of hits on outside pitches. Considering he is the closest the Cardinals have to a "big bopper," I found this somewhat surprising, especially considering he doesn't have much opposite field power. 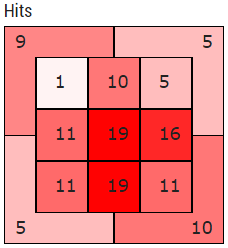 Bottom line: Peralta hits the ball where it's pitched. Period. He's the 2014 team MVP, and I am ecstatic that he wears the Birds on the Bat. 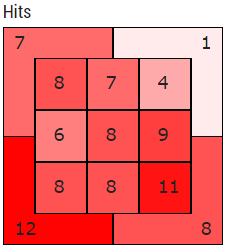 Bottom line: In my very first analysis post for Viva El Birdos (back on January 8, 2014), I looked at Molina's spray charts and concluded that decreased bat speed would likely lead to him going the other way more often. Based on his percentage of hits on inside pitches, this doesn't appear to be the case just yet. Unfortunately for the Cardinals, though, Molina looks like a completely different hitter since returning from the disabled list. 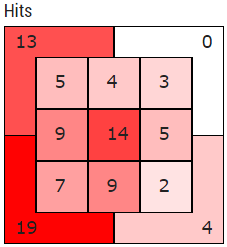 Bottom line: 62% of the pitches Wong has faced this season have been in the outside zone. In my opinion, I believe he is fully capable of turning on the inside pitch, so the fact that 56.4% of his hits have come on outside pitches should be largely attributed to where he is being pitched. 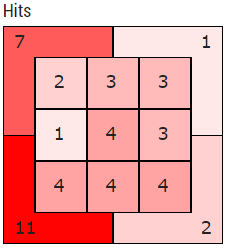 Bottom line: Small sample size. As Oscar develops into the monster he will soon be, he will hit pitches. All. over. the. park. 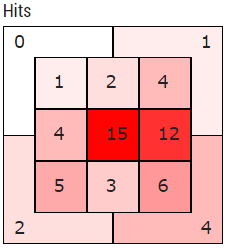 Bottom line: Again, this is a pretty small sample size, but it appears that the vertical location of the pitch is a bigger factor than horizontal location for Bourjos—highlighted by those two bright red zones.

The main point of this post was to promote discussion, and though I won't be able to check in until lunch time, I look forward to reading what you all have to say.

As with my Yadier Molina hitting strike zone post from Wednesday, thanks to Daren Willman for his terrific Baseball Savant website for the data and graphs used in this post.