Every trade is a gamble. The Cardinals appear to have lost the bet they made with the Masterson-Ramsey trade.

Every Major League Baseball trade is a gamble of sorts—a bet based on need. Each team wagers that the return it gets for a player or players will be worth what its giving up. On July 30, St. Louis Cardinals general manager John Mozeliak bet that two months of Justin Masterson in 2014 would be more beneficial to the organization than whatever James Ramsey might provide in the future. It looks like Mozeliak lost that bet.

When the Cardinals selected Ramsey in the first round of the 2012 draft, the MLB Network panel discussed the Florida State outfielder. Even though Ramsey had put up excellent batting stats in the ACC, his hitting didn't get much play. Instead the focus was on the fact that scouts had questions about his ability to stick in center field or hit for enough power to hold down a corner outfield position, so a move to second base might be in his future. Thus, Skip Schumaker was his no. 1 comparison—at least before the talk of Tim Tebow inspired by Ramsey's character and leadership ability. The whole segment left me wondering why the Cards selected a player whose overall game spurred analysis to focus on questions about his defense and to emphasize his character as opposed to his ability to hit a baseball.

Ramsey's climb through the organization did not do much to change my mind, even though he has hit very well and maintained center field as his primary position. The specter of Daniel Descalso haunts the lefthanded-hitting Ramsey's .916 Springfield OPS. A look at the organizational outfield depth chart at the time of the trade is also instructive. The 24-year-old Ramsey will turn 25 in December and was behind or at the same level as four younger outfielders: Oscar Taveras (who just turned 22), Randal Grichuk (22), Stephen Piscotty (23), and Charlie Tilson (21).

Mozeliak looked at his outfield log jam and dealt from it, betting that the potential six-plus years of Ramsey at some point in the future was worth giving up in exchange for two months of Masterson down the home stretch because it would bolster a pitching staff hit hard by injuries. The Cards' had an immediate need in starting pitching and a chance for another postseason run. Masterson would help them win now. With the club's outfield depth, Ramsey might never help them win in the future. As July turned to August, Ramsey didn't seem too steep a price for Masterson.

I have long liked Masterson as a player, largely due to his power sinker. Last year, the righty seemed to finally realize his potential, striking out 24.3% of opposing batters while issuing walks 9.6% of the time with a 58% ground-ball rate while posting a 3.45 ERA, 3.35 FIP, and 3.33 xFIP.

Whatever improvement Masterson showed in 2013 has not shown up this year. Perhaps because of injury.

Masterson has struggled with control throughout this season. MLB starters have walked 7.2% of batters faced; Masterson, 11.6%. The ready explanation for Masterson's control issues was his health. A knee injury led the Indians to place Masterson on the disabled list on July 8. In fact, Masterson was on the DL when the Cardinals acquired him from the Indians, albeit on a rehab assignment in the Cleveland minor-league system.

Despite being a long-time follower of Masterson's, his DL status caused my eyebrow to raise when the Cards traded for him. I assumed that St. Louis had dispatched scouts to watch Masterson's rehab starts—there were two, the last of which being a six-walk performance in which the sinkerballer allowed five earned runs to Triple-A batters. Masterson's 2014 performance, combined with his knee injury, made him a riskier bet than the typical trade-deadline acquisition. The sinkerballer was a reclamation projection on two fronts: health and mechanics.

Jeff Sullivan wrote a very good post at Fangraphs on Masterson at the time that, along with Aaron Finkel's analysis of the trade here at VEB, helped sway me in favor of the trade shortly after its announcement. Sullivan noted that Indians pitching coach Mickey Callaway stated that he thought Masterson's knee injury was having a negative impact on his pitching. Sullivan then went on predict that Masterson's groundballing ways would be a very good fit with the fantastic Cardinals defense. Finally, Bernie Miklasz reported that Mozeliak had shared that the Cardinals organization felt that Masterson's problems were mechanical and that the St. Louis staff could fix them.

Prior to his third start for the Cardinals, Masterson made a mechanical adjustment. Masterson decided not to bend his right leg (which he uses to push off the rubber) so that he could stay on top of his sinker. It was an interesting recommendation, given that Masterson has a more three-quarters sling to his arm action than, say, fellow sinkerballer and former Indian Jake Westbrook. Nonetheless, the results against Miami were very good, which suggested that the adjustment worked.

That is until Masterson pitched again and again.

The latest adjustment was to have Masterson pitch exclusively out of the stretch—to simplify his mechanics. (For what it's worth, I once instructed a pitcher to do this very thing for this very reason. Then again, he was on a Little League team of 10 year olds...) After surrendering three homers over 4 2/3 innings on Saturday against the Cubs, Masterson appears a mechanical mess incapable of pitching effectively. 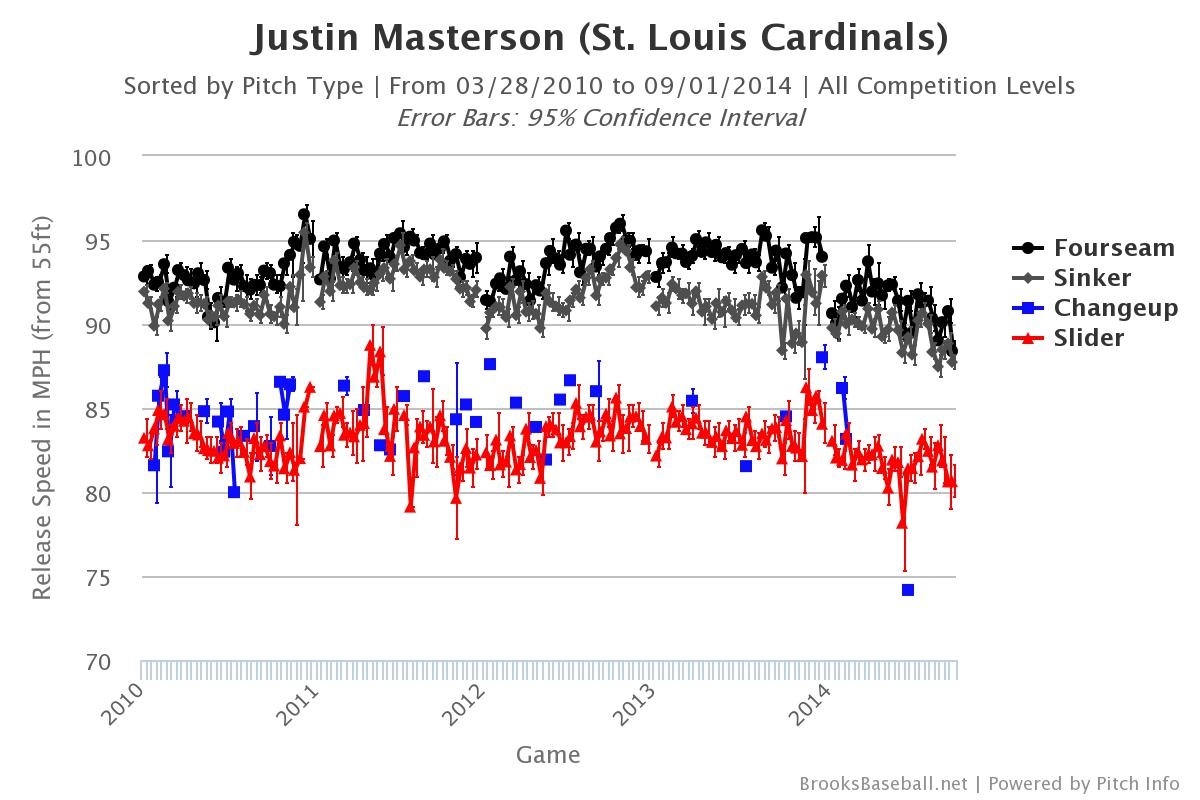 (This is a game-by-game velocity chart for 2010 through 2014, from the indispensable Brooks Baseball.)

How much of this is due to the mechanical tweaking the righty has engaged in since arriving in St. Louis is unclear. There's also the possibility that Masterson's fastball velocity has dipped due to injury. At this point, I'm not so sure that the cause matters all that much.