Adam Wainwright has not been himself lately. How concerned should we be?

Share All sharing options for: What's wrong with Adam Wainwright?

On June 10th, Adam Wainwright pitched seven shut-out innings in Tampa with, his words, "sub-par stuff." On the 11th, he underwent an MRI which revealed tendon inflammation, but no damage to the UCL or any other ligaments. For a refresher, here's Derrick Goold's piece and two from VEB's Ben Humphrey here and here.

I want to highlight something from Goold's article:

After his win Tuesday in the Cardinals' 1-0 victory against the Rays, Wainwright outlined how already this season he's pitched a couple games with a sore back, how he pitched through tendinitis without revealing it publicly, and how he's dealt with head cold-like symptoms for more than a month.

There's nothing too unusual about this, but it's a reminder that we often do not hear about minor ailments. No news is simply no news, and I think it's likely he is still dealing with the tendinitis. Let's take a look at his pitching.

His first 14 starts of the season were similar to his outstanding 2013 campaign. He got good results without his good stuff on June 10th and then skipped a start. He came back and threw two of his best games of the year, but he has been a different pitcher ever since.

While it's reasonable to wonder if six mediocre starts are worth getting too worked up over, Adam Wainwright has been mediocre in a highly uncharacteristic manner. Since opening day of 2013, the control artist has walked more than two batters in a game just seven times. Removing the one complete game from that set leaves him with six outings of three or more walks in seven for fewer innings. Four of those six games have been since July 2.

At the same time, he's striking out fewer batters than at any point since his return to baseball in 2012. 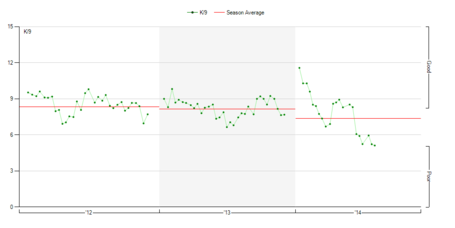 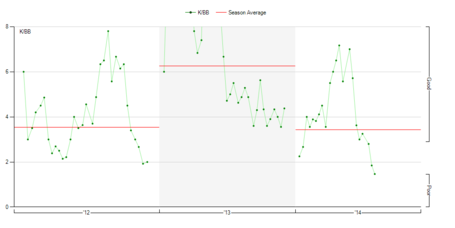 In his last six outings, Adam Wainwright has a K/BB of 1.47. Among qualifying pitchers this year, that would tie him for second-worst in baseball with Shelby Miller.

The good news is that there don't seem to be any immediate concerns with his stuff. I spent some time poking around Adam's page at the essential Brooksbaseball.com, and things look good over there. His pitch selection, velocity, movement and even whiff rate all seem within the bounds of normal, though it's worth noting that his fastball and especially cutter are down a tick from 2013, but that has been the case throughout the season, not just since early July. His fastballs did have a little extra hummus behind them in the two dominant games after his rest, but what followed is in line with what he was doing earlier in the year.

Rather than stuff, the culprit in his mid-season swoon has simply been degraded command, which doesn't rule out that he's dealing with an injury. After Wainwright's especially poor outing against Milwaukee on August 1st, there was no mention by Adam or Mike Matheny of any concern with Wainwright's health, but as mentioned above, that doesn't rule out an injury either.

There is nothing conclusive here, but it's fair to say that the missed start with elbow tendinitis and the timing of his subsequent struggles are highly suggestive that his elbow is bothering him and has prevented him from being his normally elite self.

Let's get the alarmist nightmare out of the way right now. The Hardball Times 2013 Annual found that pitchers who needed a second Tommy John surgery pitched an average of 650 innings between them. Updated research by Jeff Zimmerman changed the estimate to 4 - 4.5 years, but the innings were still in the ballpark. Including playoffs, Adam Wainwright has pitched 645 innings since he returned in 2012.

Now, other than that eerie and disturbing IP coincidence (yes, let's please call it that), there's no reason to suspect anything is amiss with his UCL. Not only is tendinitis completely unrelated to any ligament issue, but as mentioned above, his ligaments got a clean report when the MRI was done that found the tendon inflammation.

The two strong games after Wainwright's skipped start suggest that if Wainwright is indeed still suffering from inflammation, more skipped starts would be beneficial. With the acquisitions of John Lackey and Justin Masterson, the Cardinals could likely survive a handful of missed starts from Adam. It's also good that Carlos Martinez is currently getting back to a starter's routine in AAA, and Michael Wacha is hopefully ready to start throwing, pending an MRI this afternoon.

In light of what has happened since, it's a little frustrating that Wainwright wasn't shut down over the all-star break. After July's light schedule was used to move to a four-man rotation and get Shelby Miller some rest, August and September are less forgiving. Incidentally, one of the best remaining opportunities to give him a breather is provided by today's off-day. Justin Masterson could take Adam's August 7th start on normal rest. The next off-day is August 21st.

While we fans remain in the dark about how Wainwright is feeling, it's worth noting that so is Mike Matheny. But don't fret! It's all ok because as he says in this Goold article, Mike can "read body language." I hope he can read the numbers, too.