A tale of two starts: Justin Masterson and mechanical adjustments while with the Cardinals

Share All sharing options for: A tale of two starts: Justin Masterson and mechanical adjustments while with the Cardinals

Justin Masterson looked like a pitcher worth trading for in his most recent start (7.0 innings, 3 hits, 0 earned runs, 0 walks, 3 strikeouts; August 13, 2014) with the Cardinals. However, two starts ago, he got lit up—2.0 innings, 7 hits, 5 earned runs, three walks, two strikeouts, two home runs, and two hit batsmen—by the Baltimore Orioles (August 8, 2014). So, what was the difference between these two starts? Before answering this question, let's revisit a tweet from Bernie Miklasz immediately following Masterson's acquisition:

@Aaron_Finkel @stlCupofJoe For whatever it's worth Moz also thinks Masterson's control issues are mechanical and can be smoothed.

First and foremost, the Orioles have a better offense (103 wRC+, 518 runs scored) than the Marlins (93 wRC+, 485 runs scored), so this must, at the very least, be considered in the discussion. However, as you will see in the following charts and screenshots, there also appears to be one pretty obvious mechanical adjustment made by Masterson in his start against the Marlins. If you follow the Cardinals on KMOX, you likely heard Ricky Horton discussing these mechanical adjustments. Horton said that the coaching staff wanted Masterson to bend his back leg less so he could "stay on top" of his sinker better. Let's take a look:

A 6'6" monster of a pitcher with a vertical release point of less than five feet (4.93 feet, to be exact) on his sinker just doesn't seem possible, but as you can see from the data acquired at BrooksBaseball, this was the case for Masterson in his start against the Orioles. If you look even further, Masterson has had an average vertical release point of less than five feet on three of his four pitches (all but his fourseamer, 5.09 feet) over the course of his career.

Based on this information, this shouldn't be that big of a deal then, right? His fastball velocity may be down (by roughly 2 to 3 MPH), but his sinker still has life and is moving horizontally as much as it ever has (-9.18 inches on August 8th versus -9.17 inches for his career). The biggest issue from his start against Baltimore was inability to locate his pitches (3 BBs, 2 HBPs; 26 balls out of 61 pitches, 42.6% ball rate), and when he did find the strike zone, they often resulted in hits.

As you can see, Masterson's vertical release point was higher on all three pitches in his start against the Marlins, per BrooksBaseball. Most notably, the release point on his sinker was roughly 3.5 inches higher (on average) than it was in his start against the Orioles. The velocity was slightly down (by 0.8 to 1 MPH) on his fourseamer and sinker, but with the decrease in velocity came a slight increase in horizontal movement on both pitches. He was able to locate his pitches much better—issuing zero walks, hitting zero batters, and having a decreased ball rate (37.8% in Miami versus 42.6% in Baltimore).

I thoroughly enjoy numbers, but I also place a lot of value in seeing things as well. Thus, with a little help from Microsoft Paint, let's take a look at three screenshots of Masterson's release point—one from the Orioles game and two from the Marlins game. 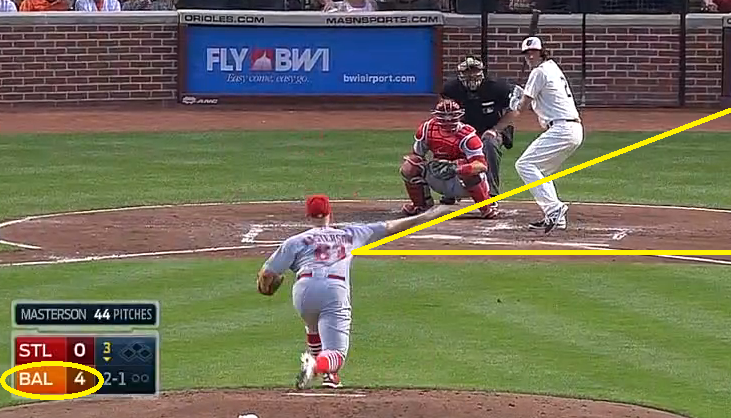 A 1st-inning groundout by Giancarlo Stanton: 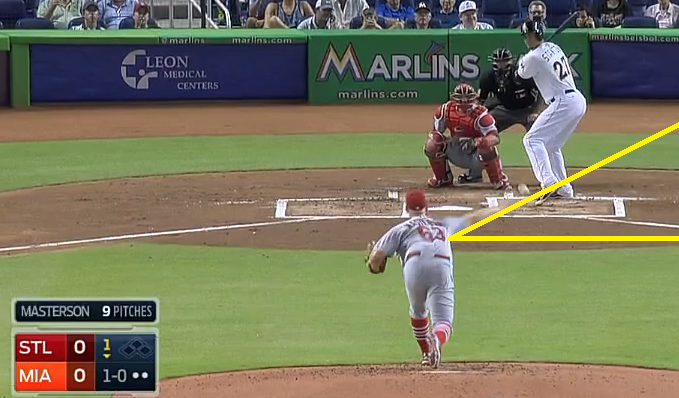 A 3rd-inning groundout by Christian Yelich: 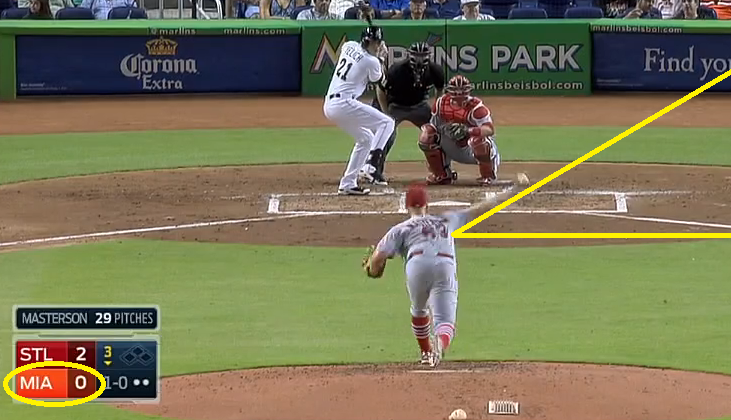 As you can see from the angles created by the yellow Microsoft Paint lines, the screenshots back up what we saw in the BrooksBaseball data—Masterson’s release point appears to be higher in the Marlins game than it was in Orioles game. Unfortunately, the camera angle from the the Orioles game is slightly offset (this really should be illegal), so it is likely affecting the depth of the picture, but still, this is what the numbers showed us, and this is exactly what Ricky was talking about on KMOX—"getting on top" of his pitches, especially his sinker.

What can the Cardinals expect from Masterson down the stretch? The "Apprentice" we saw in Baltimore? Or the "Master" (pun intended) we saw in Miami? Considering James Ramsey was a pretty decent price to give up for a rental pitcher, let's hope it will be enough to help propel the team to the playoffs, preferably via the NL Central crown.

Credit to BrooksBaseball for the data used in this post.