Taking a look at the strikeouts of Matt Carpenter

If you are reading this post on your phone, you probably should wait until you can get to a computer.

Share All sharing options for: Taking a look at the strikeouts of Matt Carpenter

Matt Carpenter has had a really weird start to the 2014 season. First and foremost, I think it is safe to say that it would be unfair to expect Carpenter to have a repeat of his 2013 performance. His incredible 7.0 fWAR season placed him fourth in NL MVP voting. To be considered valuable to the Cardinals, he doesn't need to post consistent 6-7 WAR seasons, though. Now, the organization would thoroughly enjoy having him repeat the success he had last season, but realistically, the front office knows it is very unlikely.

Well, one thing they're likely hoping is that his strikeout rate will begin to trend in the positive direction. Last season, Carpenter struck out in 13.7% of his plate appearances (33rd best in the MLB). This season, through 139 plate appearances, he already has 30 strikeouts (21.6 K%). At basically eight percentage points higher than last season, this can be somewhat concerning, to me at least. Thus, I decided to chart the final pitch of each Carpenter strikeout this season. As a quick disclaimer, I was only able to find 27 of them due to a minor glitch in the BrooksBaseball/PITCHf/x database and not including yesterday's strikeout since it wasn't updated yet. The chart (and I apologize for the pixelation upon publishing) can be found below: 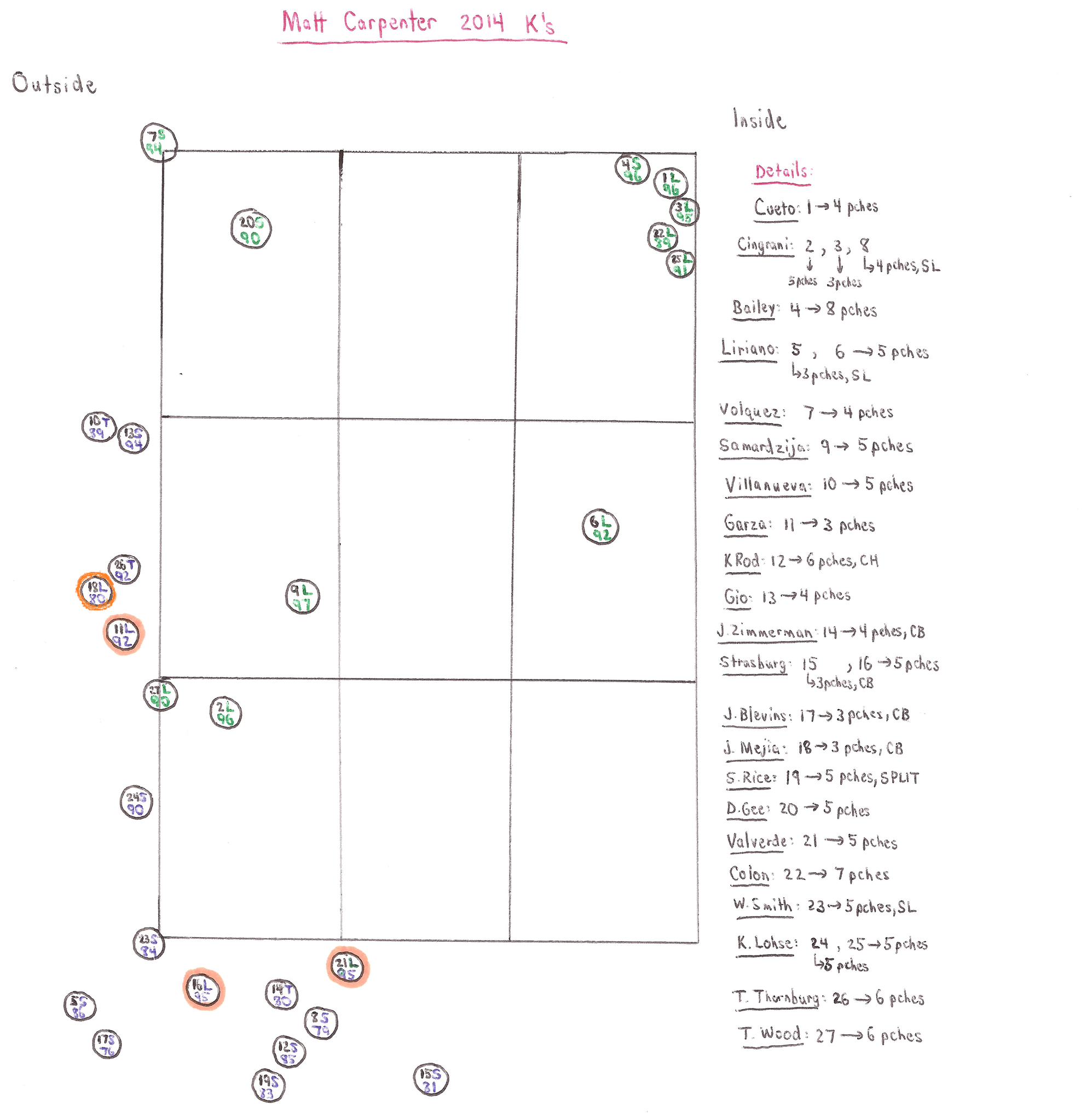 Unfortunately, there are some disturbing trends to note after looking at the chart. Twenty of the 27 charted strikeouts occurred on the outside portion of plate (and often were off the plate completely). Before looking at the data, I formed the hypothesis that Carpenter was simply giving up on inside fastballs, leading to many backwards K's. Boy, was I wrong. Four of his strikeouts came on inside fastballs, and only three of them were of the difficult to pick up on "tailing" variety from right-handed pitchers (Johnny Cueto, Bartolo Colon, and Kyle Lohse). In my opinion, those strikeouts can be adjusted for through the use of game film and developing familiarity with the opposing pitcher.

Another cause for concern, at least initially, is that 17 of the strikeouts came against fastballs. Upon further review, almost 50% of his career strikeouts have come against fastballs/sinkers, but that's expected considering he faces those two pitches most often. Thus, whether this should be considered a legitimate concern or not, I don't know, but I figured it was at least notable enough to bring into the discussion.

It's safe to say I am slightly worried about Carpenter, but fourstick did his best to provide me with some comfort:

Credit to BrooksBaseball, Fangraphs, and Baseball-Reference for the data used in this post.