In this post, I take a closer look at Tommy John surgery in baseball, with four relatively recent studies as my main source of outside information.

The American Sports Medicine Institute (founded by Dr. James Andrews) recently published a position statement regarding Tommy John injuries in baseball pitchers, and if you have not read it, I strongly suggest you do so. As a current student in the health care field (pharmacy, to be specific), this really sparked my interest. The position statement from ASMI talked about potential risk factors for the injury and cleared up a lot of notable misconceptions. The article's main focus was prevention, which is beneficial for players, trainers, and front office members, but as fans, we simply want to know whether or not our team's pitcher will be able to return to pre-injury form after the procedure. With 42 Tommy John surgeries already performed in 2014, including one on NL Rookie of the Year Jose Fernandez, I figured it was the perfect time to see what the data suggested regarding the efficacy of Tommy John surgery.

Thus, I made the trip to the campus of Butler University so that I could gain access to full-text versions of studies recently completed on Tommy John injuries in baseball, with a main focus being the MLB. Access to the abstracts/synopses of these studies is free online via PubMed.gov, but I wanted in-depth details, and thankfully, Butler's network provided this for me.  I found four pretty good studies on the topic, and I will explain my findings as clearly and concisely as possible below. All four studies were published in The American Journal of Sports Medicine, a well-respected resource in sports industry.

1. Outcome of Ulnar Collateral Ligament Reconstruction of the Elbow in 1281 Athletes: Results in 743 Athletes with Minimum 2-Year Follow-up (October 7, 2010; abstract)

There were numerous solid points made in this study, and I will do my absolute best to mention them all. After questioning, they determined that 96% of baseball players complained of pain during the "late cocking" and "acceleration" phases of throwing. This really should be no surprise considering these two phases put a significant amount of stress on the arm, especially the elbow.

The main takeaway message from this study was that most athletes (83%) returned to either the same level or a higher level of competition within one year of the surgery. Keep in mind, that 83% includes all athletes, from high schoolers to major leaguers. Looking at what matters to us, 75.6% of major leaguers (34 of 45) returned to the big leagues within one year of the surgery, 15.6% (7 of 45) went down to the minors, and 8.8% (4 of 45) did not make a return to professional baseball at all.

Finally, the article provided one more important piece of information which is now quite disheartening, "Based on the forces generated in the throwing elbow, one would expect UCL failure to occur even more frequently than is currently encountered." Considering 42 Tommy John surgeries have already taken place this year, I think this pondering statement from 2010 is now coming true.

This article starts by saying that we have come a long way since the first UCL surgery on Tommy John back in 1974. Given the sharp increase in UCL injuries (as stated earlier and shown in the graph below), this is a necessity. This study had two main objectives: determine 1) the rate of return to pitching in the MLB after Tommy John surgery and 2) performance after returning to pitching in the MLB. The authors not only compared the player's post-surgery performance to his pre-surgery performance, but also to a control group of pitchers (those who did not receive the surgery) with almost identical demographics. The second part of this comparison was performed to see if Tommy John surgery put certain pitchers at an advantage over those not receiving the procedure. Like I stated earlier, the pitchers had very similar demographics, but I'm still not so sure whether or not this means all that much. Well, before I get into this study's results, let's take a look at the following graph: 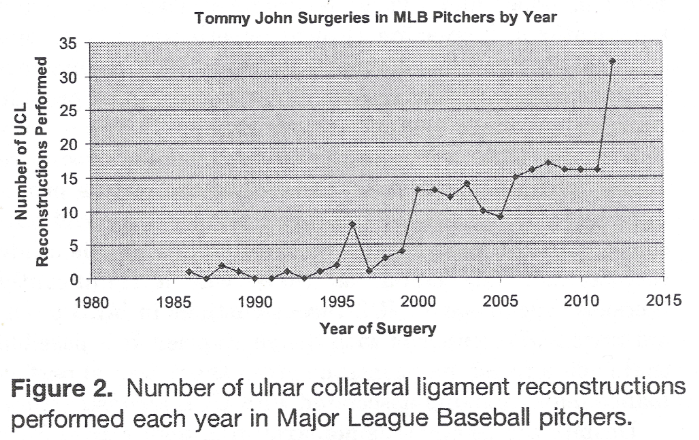 Unfortunately, this graph makes sense: Pitchers seem to be throwing faster than they ever have before, and as was said in the AMSI position statement, "pitchers with high ball velocity are at increased risk of injury." There are obviously more factors playing a role in the increase, but this has been the most talked about factor of late, and with good reason.

In the first study, 75.6% of major league pitchers returned to the MLB post-surgery within one year. In this study, 148 of 179 pitchers (83%) returned to pitching in the MLB. The higher rate (83% versus 75.6%) is significant because the study (2013) is not only more modern but also had a larger sample size of MLB pitchers (179 versus 45). Also of note, only 2.8% of pitchers receiving the surgery were unable to return to professional baseball (including both the majors and the minors).

What about performance? Well, after Tommy John, pitchers had significantly fewer innings pitched per season, when compared to their pre-injury data. However, interestingly, they also had a significantly lower ERA and WHIP. The study proceeded to talk about win and loss rates, but given all the variables going into a win and a loss, I won't discuss that aspect here. Those pitchers who underwent Tommy John not only outperformed their pre-injury self in ERA and WHIP but also had lower ERAs and WHIPs than the control group pitchers as well. Again, this is largely "for what it's worth" in my mind, but it's still interesting to note.

One final thing to note was return time. In the first study, the mean return time to live competition was 11.2 months. In this study, the mean return time was 20.5 months, significantly longer than the first. Thus, the takeaway message from this study, according to the authors, is that "performance declined before surgery and improved after surgery." Also, when compared to matched controls, those receiving Tommy John "had better results in multiple performance measures."

This study is really just an expansion on the first study by including a longer follow-up (10 years versus 2 years) to determine long-term outcomes of the surgery. This is particularly important because we would like to see what the future holds for pitchers like Jose Fernandez, who had the surgery at the age of 21. Well, for the study, the average age at surgery was 22.1 years old, and "at a minimum of 10 years of follow-up, 243 (95%) of the baseball players were retired." This is alarming because it means that if Fernandez is part of the 95%, he will have moved on from the major leagues at the very early age of 31. Then again, considering Fernandez is a freak, one can hold out hope that he will be part of the 5% still competing 10 years post-surgery.

Considering this post is already getting quite long, I won't delve into the raw data, but rather provide the study conclusions. According to the authors, most players were satisfied with their results post-surgery, both in baseball and life after baseball. In regards to their baseball careers, most returned to the same level or higher within one year, "with acceptable career longevity and retirement typically for reasons other than the elbow." This is somewhat misleading because it makes it sound like the players retired on their own accord, but if you read on, it clearly states that many of these pitchers ended up developing shoulder issues post-Tommy John. This not indicates poor pitching mechanics across the board but also the physiologic awkwardness of repetitively throwing baseballs overhand.

The authors agreed that most pitchers return to MLB competition after surgery. However, they also believe that the return to form in terms of pre-injury performance is much less guaranteed than what is made known to public. They also note that "the majority of players return to the DL at least once after surgery for recurrent injuries to the throwing arm."

Return from Tommy John surgery is not a guarantee. Though the majority of pitchers (80-85%) do return to the same or higher level of play, that still leaves 15-20% who do not. Plus, as the last two studies pointed out, the surgery does not necessarily guarantee improved performance and a "clean bill of health" for x amount of years. Instead, many pitchers see a decrease in performance and many find themselves land on the DL for more arm-related trouble. Thus, the best option, even with the astounding advancements in Tommy John surgery, is to prevent the injury altogether. Tommy John surgery, though vastly improved, should not be considered a magical performance-enhancing treatment option.

Finally, the surgeon that performed all of the surgeries in studies one and three was Dr. James Andrews. Dr. Andrews participated in the publication of these studies as well. Though it solidifies the data given the fact that the same surgeon performed all of the procedures, the fact that he actively participated in the publication of these studies must be noted as well. This does not invalidate the studies by any means, but as a responsible reader, it is always best to be aware of the author(s).

Ten years from now, I hope to see Jose Fernandez still pitching at a high level in the major leagues. He is truly special to watch.