Lance Lynn deserved a much better fate, but that's baseball

A detailed analysis of Lynn's nine-strikeout outing against the Mets.

Share All sharing options for: Lance Lynn deserved a much better fate, but that's baseball

The St. Louis Cardinals offense with Lance Lynn on the mound: First it giveth, then it taketh away.

Well, yesterday Lynn faced off against Bartolo Colon, and he received a solitary run from his offense. Going into the outing, Lynn had never lost a game in the month of April, but with only one run of support, that streak came to an end. His final line was 6.1 innings pitched, four hits allowed, three runs allowed (two earned), two walks, and nine strikeouts. His nine strikeouts were all very different. Because they were all very different, this pitching fan thoroughly enjoyed watching Lynn's performance. 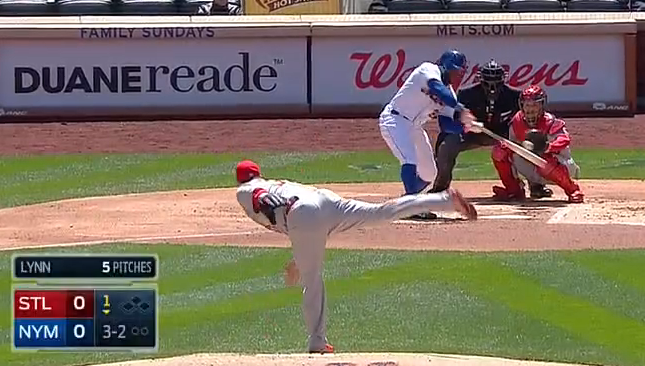 Lynn fell behind in the count 3-0. If you watched this at-bat in full, it was obvious Young didn't want anything to do with Lynn's fastball. On strike one and strike two, Young had already left the batter's box, doing his best to bait the umpire into calling ball four. For strike three, despite being down and on the outside part of the plate, Young was falling away and simply flipped his bat at the ball. If Lynn walked Young here, I think his performance would have been a whole lot different. 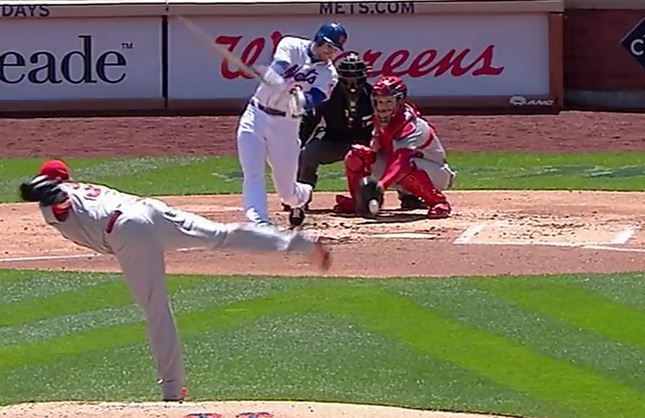 Like the first batter, Lynn fell behind in the count again, this time 3-1. His first five pitches of the at-bat were fastballs which set up his strikeout pitch beautifully. I have now watched in at least ten times, and I still cannot decide if it was a hard curveball, a slider, or a cutter. Regardless of what the pitch actually was, it produced a foul tip into the glove of Tony Cruz for strikeout number two. This was probably my favorite strikeout from Lynn in the game because he had the guts to go to his breaking ball with two strikes, something I have not seen much from him in the past. 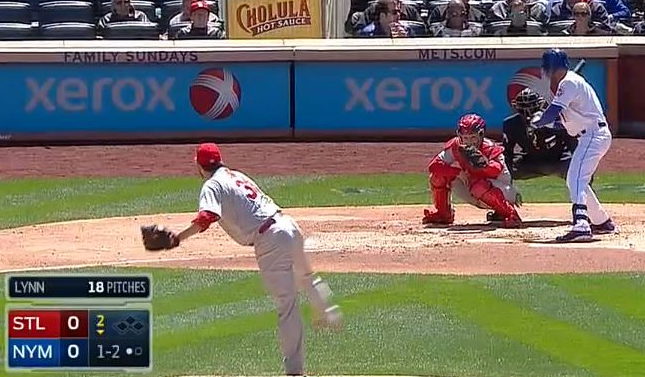 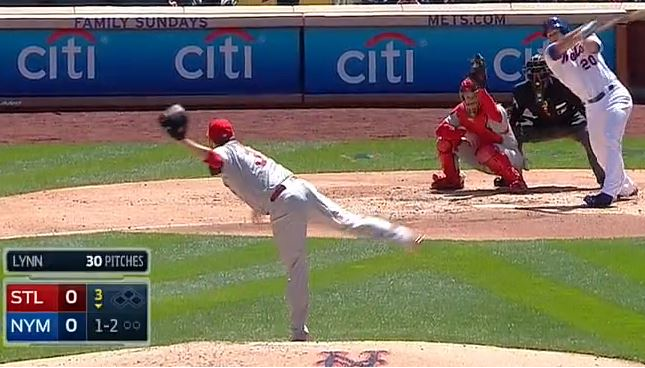 Anthony Recker didn't really stand a chance here. He faced four pitches, and all of them were fastballs. Three of them were strikes, and he swung and missed on two of them. The strikeout pitch was probably a ball, but Lynn set it up beautiful with a fastball low in the zone on the prior pitch. I've said it once, and I'll like say it a million times. Lynn's ability to change the hitter's eye level with his fastballs is a joy to watch. 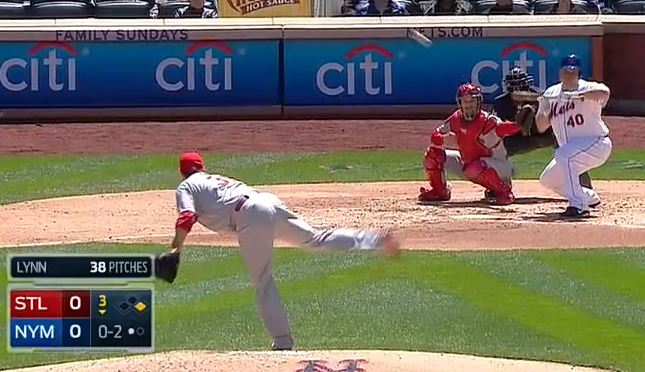 Lynn got a gift strikeout here. Not much else can be said. There's a reason why Colon's a career .096 hitter. 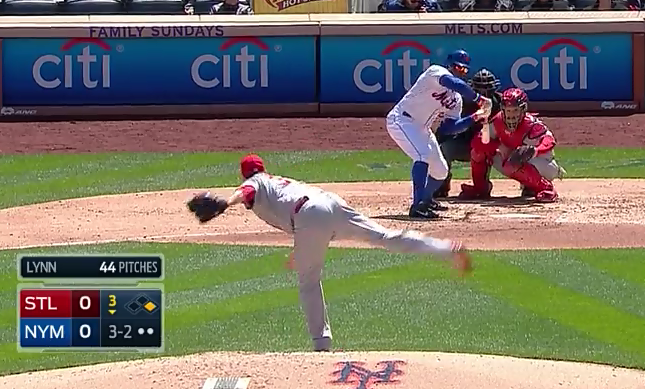 When Lynn faced Young the first time, he gave him a heavy dose of fastballs. So what did he do on the first pitch of this at-bat? He threw a nasty 84 MPH breaking ball that induced a swing and a miss. Unfortunately, as he did against Young earlier, he fell behind in the count, 3-1. After the third ball, he stepped off the mound and gathered himself. It worked because the next two fastballs were some of his best in the game. Young didn't really stand a chance on either. 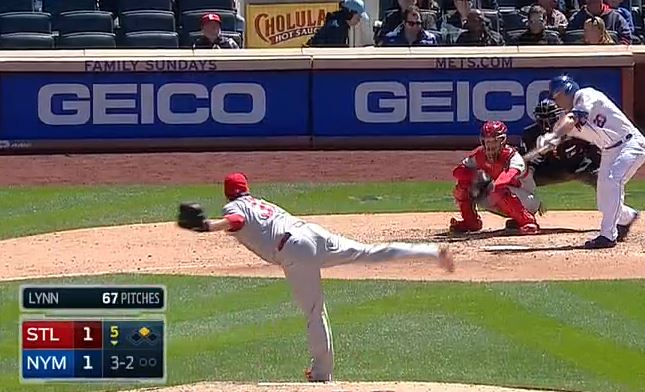 Like with Young, Lynn gave Recker a heavy dose of fastballs in his first at-bat. Knowing this, he threw a "get-me-over" 80 MPH breaking ball to get ahead in the count. He followed with four straight fastballs and finished him off with a nasty 86 MPH breaking ball on the outside corner. Who ever said Lynn was just a "thrower"? At-bats like this one show me that he is much more polished as a "pitcher" than most people realize. 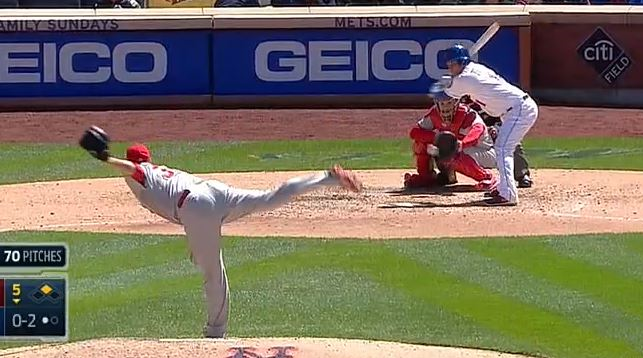 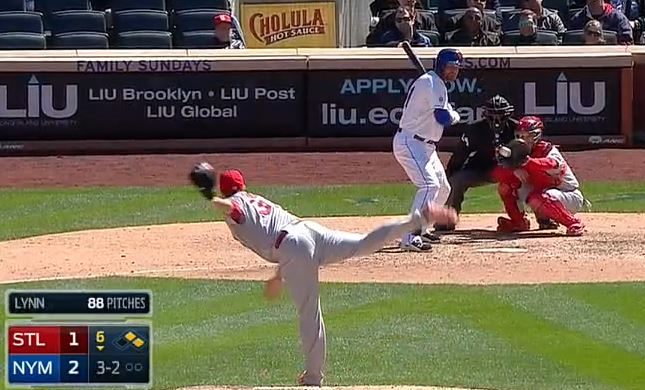 With two runners on and no outs, Lynn fell behind Lucas Duda 2-0. At this point, you could just hear Dan and Al primed and ready to unleash the "big inning" narrative. Well, to be honest, it probably would have been had Lynn thrown a fastball on 3-2. Instead, Lance dropped in an 83 MPH changeup for strike three. As you can see, the location was very hittable, but Duda, sitting fastball, could do nothing but watch as the ball harmlessly entered Cruz's glove. That's pitching, and Lynn did an absolutely fantastic job at it yesterday.

Lynn's outing was obviously not blemish free, but the fact is he pitched well enough to give his team a chance to win. He grooved a 91 MPH fastball up in the zone to Chris Young—leading to a second-deck solo home run in the fifth that tied the game at one. He committed a throwing error on a bunt from Eric Young Jr. to start the sixth. I still firmly believe Adams should have caught Lynn's throw and believe he would have if he had better footwork. Young eventually came around to score after Lynn had already been taken out of the game.

The solid stat line wasn't the most notable part of the Lynn's outing in my opinion. There were two things of note that will be very promising for the right-hander going forward. First, it appeared his pitches (especially his fastballs) had more horizontal movement than usual, and second, it appeared he was mixing his pitches more effectively than we have seen in the past. He normally uses his breaking pitches as mere set-up pitches for his fastball, but yesterday, this wasn't the case. He was going to his breaking ball in situations where he needed a strike (i.e. on the first pitch or with two strikes) and was quite effective with it. In fact, two of his nine strikeouts were on sharp, hard breaking balls.

Unfortunately, only the raw, uncoded data from Lynn's start is available at the time this article published, so I cannot 100% confirm these two observations at this time. Yet, based on some rough calculations from the data I do have, it appears Lynn's fastballs averaged 6.818 inches of horizontal movement—nearly an inch more than his career average (6.002 inches). How big is an inch? In most things in life, it's not that all that much, but when you're a fastball-reliant pitcher like Lynn, it can be crucial for success. Going off the raw data, it appears Lynn indeed went to his breaking balls more often (25%) than normal, but it appears the system had a tough time classifying what was a curveball and what was a slider. In fact, according to his player card on BrooksBaseball, Lynn doesn't even throw a slider, which I find interesting because I am pretty sure some of Lynn's pitches yesterday were sliders.

Despite the end result (a loss), Lynn's pitching was beautiful yesterday, and it really is unfortunate not all of us were able to see it considering it was a day game.