Pitching Matt Adams away while employing an infield shift expecting him to pull the ball is not a contradictory use of tactics.

Share All sharing options for: Pitching to the shift against St. Louis Cardinals slugger Matt Adams

I was listening to the latest episode of Bernie Miklasz and Derrick Goold's Best Podcast in Baseball (which lives up to its name for St. Louis Cardinals fans; it's terrific). At one point, the Post-Dispatch's dynamic duo got to discussing Cardinals first baseman Matt Adams and the defensive shift. This has been a favorite topic among VEB writers. I examined Adams vs. the shift in January and Craig revisited the early returns last week. During the BPIB, Goold touched on a subject that I've also heard Mike Shannon and John Rooney discuss during radio broadcasts: Why do opposing teams play Adams to pull the ball on the infield and then pitch him away?

It's an interesting question, and one that the indispensable Baseball Savant can help us answer.

To begin with, let's remind ourselves of Adams's career spray chart. Both Craig and I posted one from Fangraphs in our earlier posts on this subject, so I'm going to use spray chart of only groundballs from Baseball Savant. Here it is: 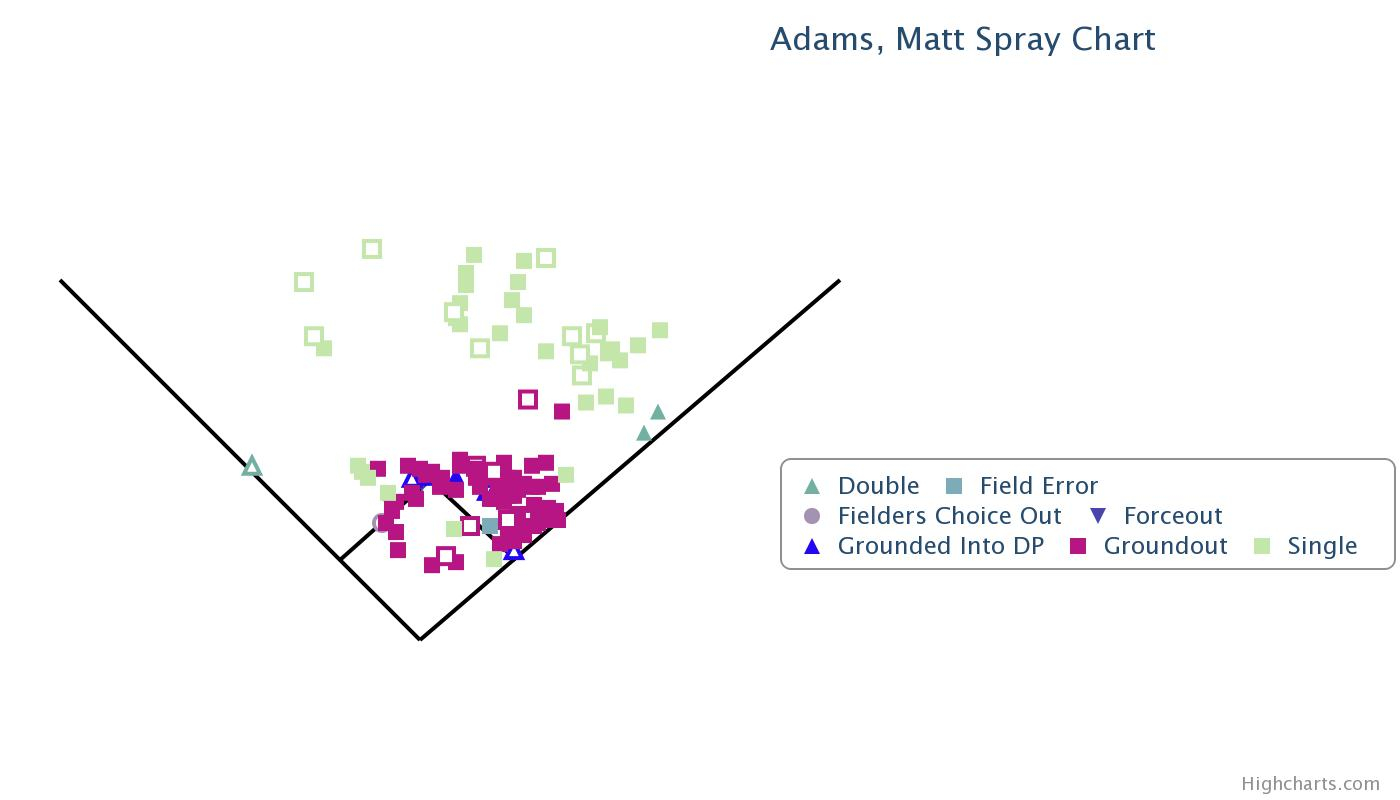 The justification for the extreme infield shifts that have been employed against Adams to date is this image.

How did pitchers induce such results against Adams? Well, a fair amount of them came on pitches off the plate and away. Here is the zone breakdown for the pitches that Adams has hit as grounders to center, right field, first base, and second base in his career. 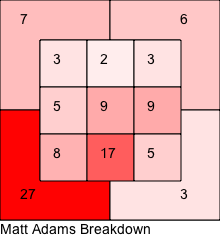 As you can see, Adams has rolled over on a lot of pitches outside the zone, and grounded them up the middle or pulled them. One of the theories that Goold on the BPIB shared regarding the opposition's pitch location when challenging Adams with the infield shift on came from Cardinals manager Mike Matheny. He suggested that the other clubs were throwing offspeed pitches away in an attempt to get Adams to roll over and ground out to the right side of the infield. But that theory is not necessarily supported by the data. 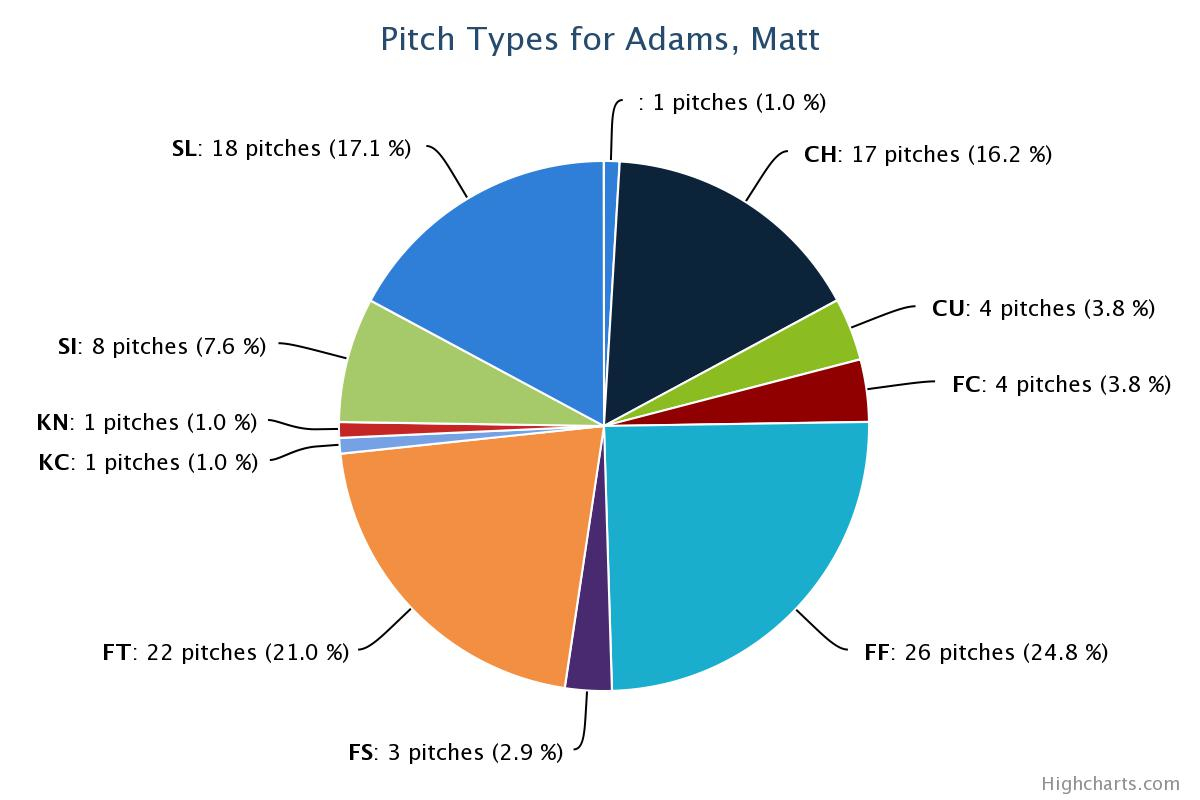 The pitch-type chart demonstrates that Adams has hit about as many fastballs—"FF" are four-seamers and "FT" two-seamers—combined as offspeed pitches combined for grounders up the middle and to the right side. This remains true even if we narrow our focus to pitches on the outer three sections of the strikezone and the two outside quadrants outside the zone. 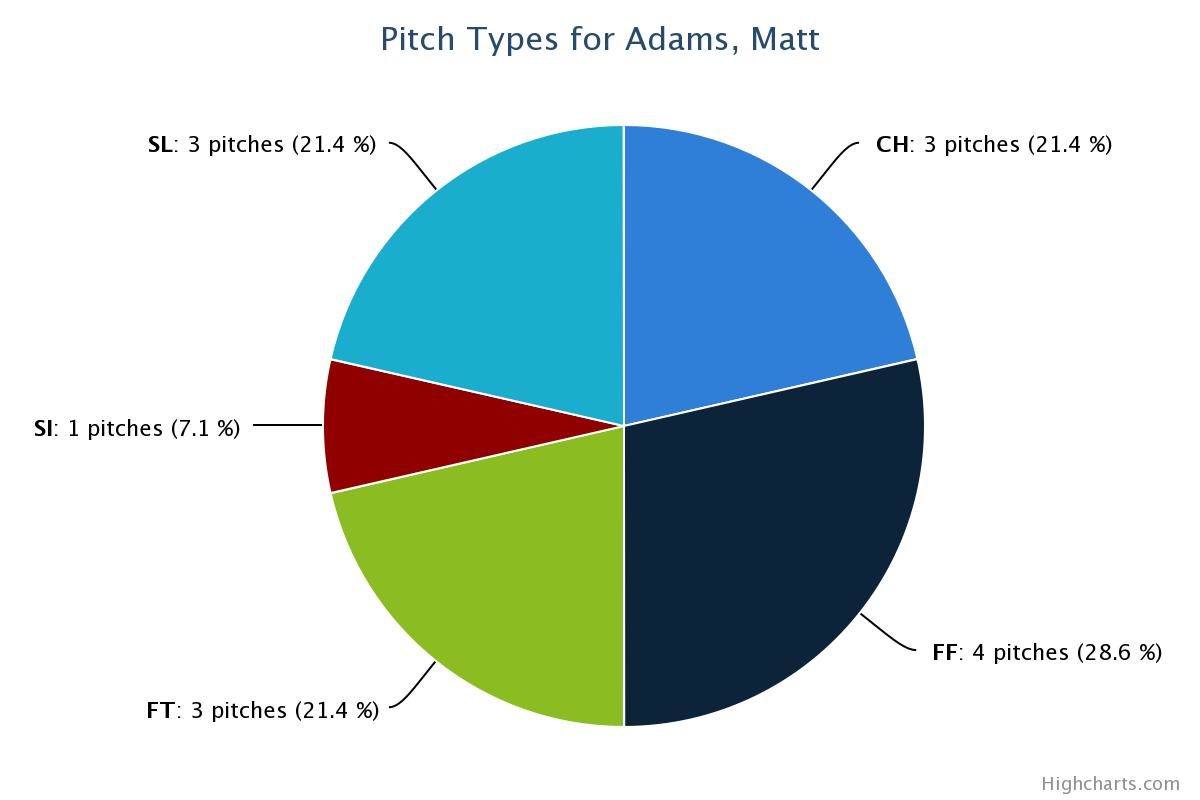 Adams has done an excellent job of driving pitches to left for base hits against the shift so far this season. If he continues to beat the shift in this way, the opposition may need to revisit their plan for getting him out. But Adams's history at the plate to date indicates that challenging him with pitches away while shifting the infield for him to pull are not contradictory tactics.