The Cardinals' flame-throwing righthander has uncharacteristically seen his fastball speed dip into the mid-90s. Should we be worried?

St. Louis Cardinals closer Trevor Rosenthal had a pair of rocky outings this weekend against the Chicago Cubs. On Friday night, Rosenthal allowed two baserunners to reach safely before surrendering a three-run homer to Wellington Castillo that proved decisive. On Sunday afternoon, Rosenthal allowed two well-barrelled balls, three baserunners, and a run before notching the save. All of this led to some consternation after the game about Rosenthal's fastball.

Matheny says dip in Rosenthal’s velocity is something ‘we’ve noticed.’ Rosenthal says he feels fine. Topped out at 97 Sunday. #stlcards

Asked about drop in velo, Rosenthal said arm feels good and ‘I’m not exactly sure what you mean.’ Said he doesn’t look at radar readings.

Is there reason to be concerned about Rosenthal's heater?

First, let's establish a baseline for what Rosenthal's four-seam fastball usually sits at. Per Brooks Baseball, Rosenthal has averaged 98.11 mph with his four-seam fastball over the span of his young career. His speedball sits in the 97-99 range and touches 100 mph—it doesn't live in the triple digits, but near that velocity.

This year, Rosenthal has tossed 80 four-seamers. The Cards closer has averaged 96.33 mph with his fastball. Put otherwise, Rosie's heater has averaged 1.78 mph less this wet, cold, and young season than it has for his career.

Consider this velocity chart from Brooks Baseball, which tracks Rosenthal's four-seamer through each appearance of his MLB career. 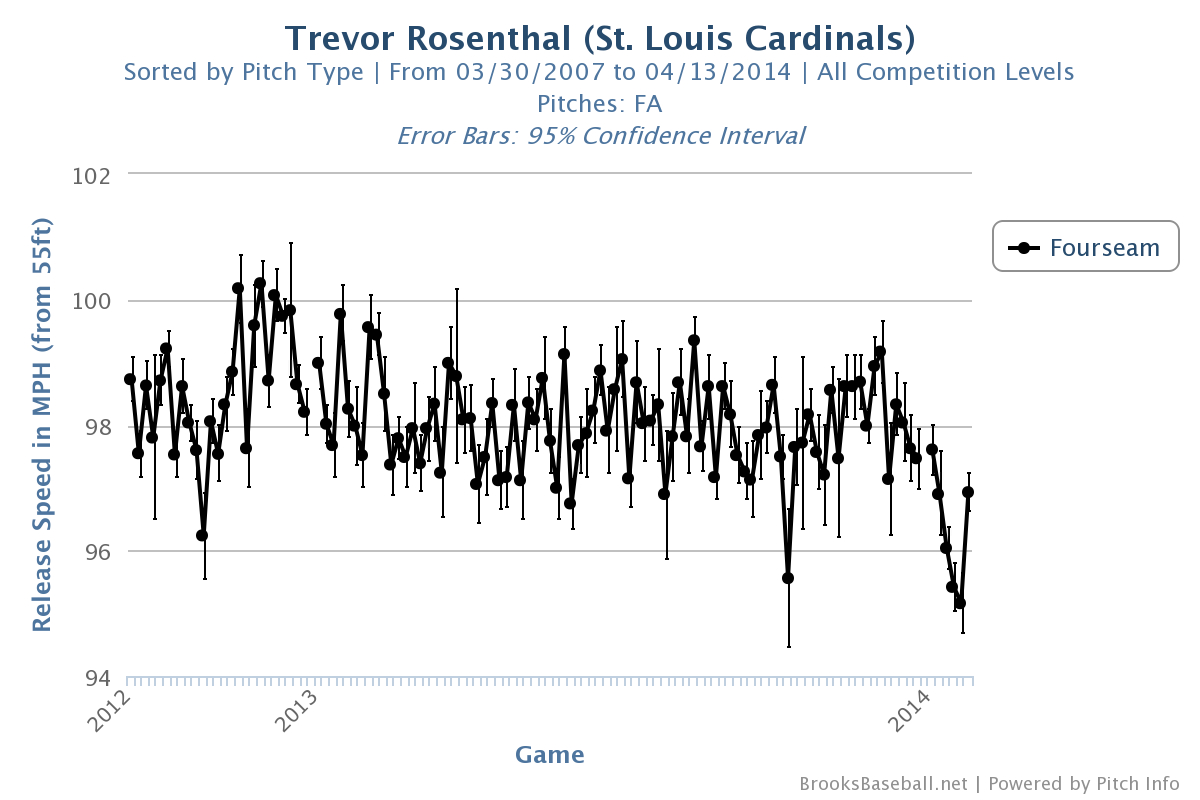 With Friday's outing, Rosenthal's four-seamer has dipped below 96 mph over consecutive appearances for the first time in his big-league career. Rosenthal's fastball had dropped with each appearance since opening day—bottoming out at 95.16 mph Friday night against Chicago. In fact, the pitch Castillo laced into the left-center bleachers for the game's decisive homer was a 95-mph fastball about belt high.

On Sunday, Rosenthal's fastball speed crept upward to 96.93 mph, a tick above what he averaged against the Reds in his second appearance of the season (96.9 mph). While Rosenthal's fastball did not light up Pitch F/X in the uncanny way we've become accustomed, it was still a welcome increase. Hopefully Sunday's performance is the first in a series of appearances in which Rosenthal's four-seamer heats up with the weather.