Know your NLDS foe: Breaking down Clayton Kershaw, the best active pitcher on the planet

Game 1 of the 2014 NLDS: Adam Wainwright and the Cardinals versus Clayton Kershaw and the Dodgers at 5:37 PM CST, in Los Angeles.

Share All sharing options for: Know your NLDS foe: Breaking down Clayton Kershaw, the best active pitcher on the planet

Upon the completion of the 2014 postseason, Clayton Kershaw will be awarded his third National League Cy Young Award and given injuries to some other top candidates (Giancarlo Stanton, Andrew McCutchen), he appears to be a front-runner for league MVP as well. Despite tallying six less than his previous three year average (27 versus 33), Kershaw produced a career-high fWAR of 7.2. He tallied career-lows in ERA (1.77) and FIP (1.81) as well. Yet, as Derrick Goold noted yesterday, the "Cards fare better than most against Kershaw." Goold already noted that his ERA in 14 regular-season starts against the Cardinals is nearly one run higher than against the rest of the league, but what about some other statistics? Let's take a look:

To go along with the already-noted higher ERA, the .241/.316/.334 slash line is also considerably higher than Kershaw's overall line of .209/.273/.308. In 2013, Kershaw had a walk rate of 5.7%. This season, Kershaw somehow bested 2013 with an insanely low 4.1%. Yet, in 88.1 regular season innings pitched, Cardinal hitters have managed a 9.3 BB%. His 2.62 K:BB ratio is below his career average (3.41) and significantly lower than the 7.71 ratio he posted this season. Add all of this information together, and it becomes very slightly clearer as to why the Cardinals have had relative success against the All-World left-hander. Yet, these numbers aren't staggering by any means. Nearly every pitcher in the MLB would be fine with a 3.46 ERA against any given team, especially a good team like the Cardinals. Thus, the margin of victory for the Cardinals over Kershaw is slight, and they will gladly take any "edge" they can get against the ace.

2014 repertoire plus some PITCHF/x data

Like most pitchers, Kershaw is "fastball first, breaking ball second." However, unlike most pitchers, he has three plus (likely "plus plus") pitches and not just one, maybe two. He also has a hard changeup in his arsenal, but very rarely throws it. One of the most notable things included in this chart is the vertical release points of each of his pitches. All four of his pitches have vertical release points within one inch of each other—contributing to his deception and the relative inability of hitters "picking the pitch up" out of the hand. It's borderline illegal to have stuff as nasty as Kershaw in the first place, but to have stuff as nasty as Kershaw and to disguise it as well as he does by mimicking release points? It makes sense why he is as good as he is at his job.

As you can see, Kershaw pumps fourseam fastballs on a regular basis, regardless of the count. Considering it has been far and away the most valuable fourseamer in the league the last two seasons, this comes at zero surprise. Well, possible Cardinal starters have hit .280 (314 hits in 1,122 AB) against fourseam fastballs this season. Now, the average MLB fourseam fastball is obviously no Clayton Kershaw fastball, but it definitely doesn't hurt that the team has had success against the pitch this season.

With Kershaw throwing fastball first pitch at a very high rate (79% to RHHs, 82% to LHHs), notorious first-pitch swingers like Yadier Molina and Matt Holliday will likely be jumping on that very first fastball they see. Molina is slashing .313/.320/.456 on the first pitch in his career, while Holliday's career line is a scorching .381/.393/.692. It helps both Molina and Holliday that Kershaw has been especially susceptible on the first pitch in his career, with hitters slashing .292/.297/.428. in 640 plate appearances.

Over the course of his seven-year big league career, 64.2% of Kershaw's breaking balls have landed outside of the strike zone. For perspective, Adam Wainwright throws his "breaking" balls (curve, cutter) out of the strike zone 64.75% of the time himself. The nastiness of Kershaw's breaking balls has led to combined batting average of .142, despite the pitches being out of the zone nearly two-thirds of the time. Thus, if Cardinals hitters are able to pick up on the pitch later this evening, they might as well just lay off of it because two out of three times, it's going to be a ball (as long as it doesn't also fool the umpire).

By my count, in last year's 9-0 NLCS Game 6 shellacking, Kershaw threw 17 of his breaking balls out of the strike zone (counted manually by going through each AB, so I could have missed one or two). Cardinals hitters chased seven of them and let 10 go for balls. In at bats in which they chased a breaking ball out of the zone, they recorded four outs, but also had two hits, one of them being in this terrific 11-pitch AB by Matt Carpenter. Though a .333 batting average (2 hits in 6 ABs) is desirable, it is not all that likely to be duplicated, so it is, at the very least, a good sign that St. Louis hitters were taking out-of-the-zone breaking balls more than they were chasing them (58.8% take rate). In order to have continued success against Kershaw tonight and for his second start this series, this trend must continue. Ideally, the Cardinals take rate on breaking balls out of the zone should be 75-85%, giving proper credit to Kershaw's devastating stuff by "allowing for" a 15-25% chase rate by the Cardinals.

Personally, I don't think it's worth swinging at a Kershaw breaking ball before there are two strikes in the count, but that's also coming from someone sitting behind a keyboard and not standing in the batter's box of Dodger Stadium. Picking up his breaking balls out of his hand is obviously no easy task. According to Fangraphs' pitch values, Kershaw's slider has provided the most value in the majors at +21.7 and his curveball (+7.5) has provided the seventh most. As stated earlier in this post, Kershaw's fastball has been even more valuable over the last two seasons, but in general, a fastball is more predictable and easier to "look for" than a breaking ball. It's always nice to work the count against a pitcher like Kershaw in hopes of getting to the bullpen, but percentages show that fastball hitters should be looking for it on the first pitch. Percentages also show that the easiest way to work the count against Kershaw is by laying off all breaking balls early in the count (64.2% land out of the strike zone).

If Kershaw leaves a fastball in one of the zones boxed in green (see below), the Cardinals will be in business (.312 batting average): 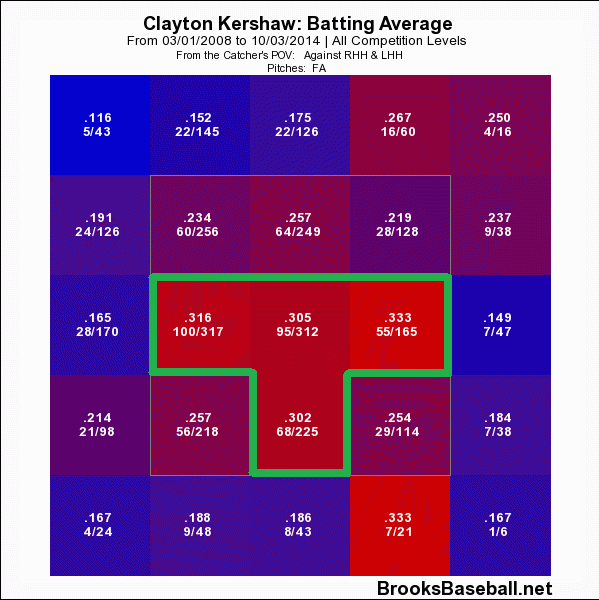 As always, credit to BrooksBaseball, Fangraphs, and Baseball-Reference for the data used in this post.