Share All sharing options for: Cards vs Astros Spring Gamethread 3/22

In 2005, the Houston Astros opened their season by hosting the St Louis Cardinals. Their first three starters were Roy Oswalt, Andy Pettitte, and Roger Clemens.

I'm not mentioning this to kick a team while its down. At the very least, the Astros seem to be walking in the right direction down a long road back to respectability. And I'm also not comparing our current team to the 2005 Astros. We are much younger and deeper, but things change. Enjoy it while it's good. I hate to imagine how Michael Wacha would look with frosted tips ten years behind the future's fashion.

-Michael did well in his last spring outing, also against the Astros. He'll likely have 80+ pitches this time to expand upon his effort.

-Aledmys Díaz gets another start at short.

-Piscotty and Grichuk will bat back-to-back. Major League Baseball is having a difficult time recruiting baseballs to volunteer for action this afternoon, even without Holliday in the lineup.

-Here is a good read on Oberholtzer's two styles of curveball.

-And I need to give Mr. Cosart his due. He might not be Andy Pettitte, but his last start was quite good. Nine K's in five perfect.

-Speaking of Rocket and Pettitte, they'll be on hand April 2nd to kick off the Jeets farewell tour. I'm in the "Jeter's career is probably underrated" camp, but I'm getting the feeling that this season-long goodbye will annoy me far more than Mariano Rivera's.

-Springer, Singleton, Correa, DeuxShields, Appel, and Folty have all been sent back down. The future will have to wait. 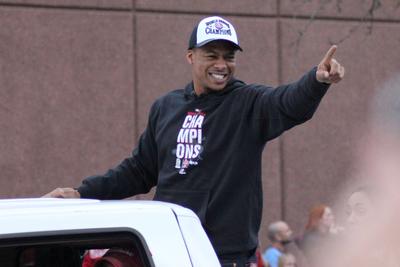 The game begins at 12:05 Busch Stadium Time. Houston is broadcasting, so you'll need mlb.tv to watch this afternoon.