It should be a fun first few innings today as a pair of phenoms at opposite ends of their careers get their first action of the year. Michael Wacha made a big impression by dominating his appearances last spring, and he begins this year with a rotation spot all but guaranteed.

Former sensation Daisuke Matsuzaka, now 33, is looking to win the Mets 5th spot and keep his career going. He finished last season strong, with 4 good starts after tweaking his delivery on the advice of Mets Pitching coach, Dan Warthen. Aside from mechanical changes, the once legendarily long amount of time he took between pitches was cut in half. Here's to hoping that continues. Watch for his control and the bite on his breaking balls for early indications that he might return to being a serviceable pitcher.

Here is a NYT article about the changes he made.

Many of the Cardinals expected regular season contributors are starting today, and on the Mets side keep an eye on Ike Davis and Travis d'Arnaud. They are likely keys to the Mets' success this year as they wait to trot out Harvey-Wheeler-Syndergaard in 2015. Also be careful not to look directly at Curtis Granderson's smile. It gives off nearly as much light as the sun.

Who is that in left-field? 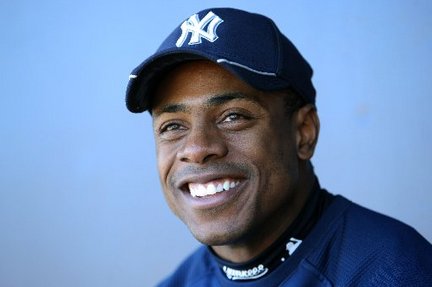