The St. Louis Cardinals played Carlos Beltran on Tuesday, wiping out their chances of backdating a disabled list stint.

Share All sharing options for: St. Louis Cardinals' Carlos Beltran could still be ready for Opening Day despite toe injury

The St. Louis Cardinals gestured toward the possibility of Carlos Beltran being ready for Opening Day on Tuesday, playing him in an MLB spring training game despite his lingering toe injury. We won't know what that means until he's had a chance to deal with the consequences, but things seemed to go fine in the moment: Beltran, playing right field, went 1-2 and walked twice in the Cardinals' 11-4 victory over the Mets. 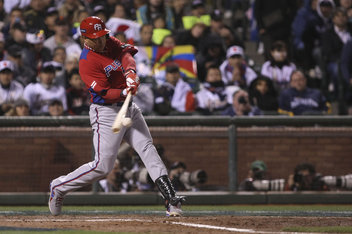 It's probably not quite that simple.

The Cardinals certainly have no need to rush him—Matt Adams will likely play first during any brief absence, with Oscar Taveras entering the picture if his broken toe metastasizes into a broken Beltran. Between that and the built-in incentive to not play him, and leave open the opportunity to shorten his disabled-list stint, would seem to suggest the Cardinals aren't worried about Beltran.

Which isn't to say they shouldn't be; I seem to recall the Cardinals delaying some pretty inevitable-looking disabled list stints on a few occasions by bringing a hobbled slugger in to pinch hit after a week off, only to add him to the DL afterward anyway. I'd just as soon they didn't practice that trick in spring training, but since it means we're ever-so-slightly more likely to see Oscar Taveras in a major league uniform I doubt fans would get as angry about it as usual.