Pete Kozma's competition for Rafael Furcal's job was released on Tuesday, but that doesn't mean the St. Louis Cardinals are stuck with him at shortstop.

As it turns out, Ronny Cedeno was officially a member of the St. Louis Cardinals for negative-two-weeks. The Cardinals released him Tuesday, which means Matt Adams is probably on the 25-man roster and Daniel Descalso is probably the only guy backing up Pete Kozma.

Which is not to say that the Cardinals are now down to Pete Kozma. What follows is a relatively brief update of the Cardinals' shortstop picture—in case of Kozma regression, break glass in this order:

Just as the Cardinals planned back in 2007, Pete Kozma floundered for four years in the high minors, fell behind Ryan Jackson defensively, suddenly leapt ahead of Ryan Jackson defensively, spent two offseasons in the University of Missouri's communications program developing an inimitable interview style, slugged .570 for a month, and will now be their Opening Day starter at shortstop in 2013.

His most pessimistic and optimistic projections on FanGraphs are interesting boundaries re: whether the Cardinals will choose to replace him in midseason. His ZiPS projection—.226/.284/.328—puts him right around replacement level if he's playing average defense, and unless he's playing conspicuously good defense it seems like the kind of line that would drive them to audition somebody else. (Matt Adams will need a position.)

His Oliver projection—.232/.294/.357—isn't a huge improvement, but it gets him nearer shouting distance of last year's NL shortstops in aggregate (.259/.313/.387), makes him look like he's contributing something on offense, and lessens the strain we'll have to put on his defense to imagine him as a useful player.

Furcal himself was the product of a shortstop plan that ended up (a little predictably) right at replacement level. The Cardinals' most plausible offseason trade target, Asdrubal Cabrera, ended up with a postseason competitor, just not like we anticipated; Elvis Andrus and Troy Tulowitzki have both been shot down.

But few would have pegged Furcal as a potential starter two Marches ago, or Alex Castellanos as trade bait. By the time the Cardinals are in a position to demote Kozma I don't doubt we'll be waist-deep in rumors and Terry Evans/Alex Castellanos-style breakout prospects to make rumors about.

If Garcia is better able to replicate his numbers at a new level (he hit .284/.408/.420) than Kozma, he could get a look before the Cardinals go outside the organization. Garcia's not a member of the 40-man roster, but that's a problem easily rectified if he's hitting conspicuously well and Kozma isn't.

I'm as worried about how his bat will play outside of Springfield as anybody else, but if the Cardinals believe in his glove he's got a lot of offensive slack to give, relative to Kozma—ZiPS and Oliver have him at .239/.329/.336 and .247/.327/.363, respectively. Over 500 plate appearances that's a difference of 20-ish times on base.

Ryan Jackson is on the 40-man roster, and although he currently lacks a position it's a little early to count him out of the Cardinals' plans entirely, seeing as those plans currently involve starting Pete Kozma instead of designating him for assignment.

Scouts' assessments of his defense could change again, and his bat was really stable between levels; the hardest part for him could be finding playing time behind Garcia and Kolten Wong. 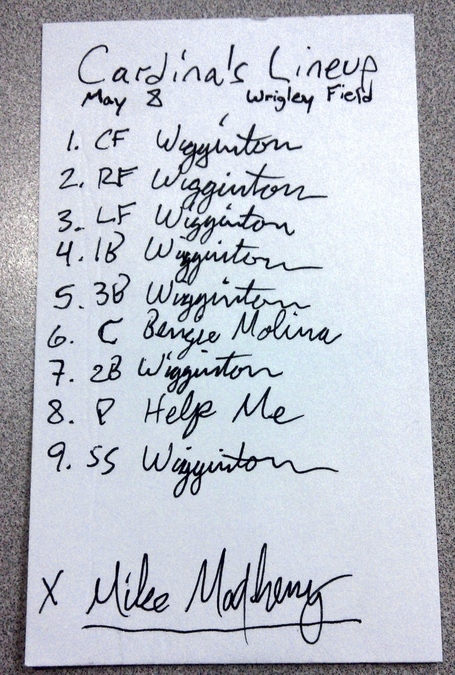