The St. Louis Cardinals' bullpen picture got clearer after Trevor Rosenthal moved in, but Marc Rzepczynski's bizarre, scary eye injury could leave room for a surprise.

We just finished talking about how easy it was getting to predict the St. Louis Cardinals' opening day bullpen—click the sidebar link for my best guess at it—which is why it should surprise nobody that Marc Rzepczynski is now dealing with an injury that could cause him to miss opening day. With Sam Freeman also hurt, the Cardinals could go into April without their preferred two-lefty configuration—provided Randy Choate can avoid falling victim to an even stranger golf-related eye injury.

Trevor Rosenthal's a reliever, so who's a starter? 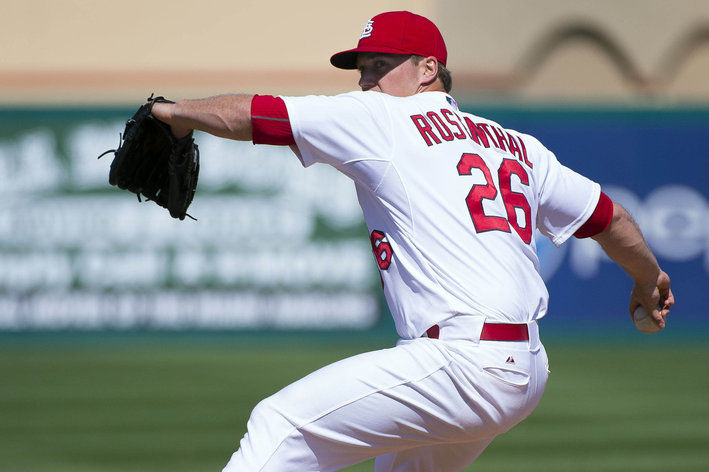 An updated look at the Cardinals' bullpen and rotation pictures.

Quickly, here are the Cardinals' options if Rzepczynski has to miss regular-season time:

The Cardinals' crop of left-handed pitching prospects are somewhat less exciting than the right-handers. Tyler Lyons got a lot of love from Future Redbirds, and his high strikeout rates make him perhaps the most interesting option, but he's not a member of the 40-man roster. (He is, however, getting plenty of spring innings—eight, third-most on the team.) Neither is John Gast, still best known for his pick-off move, or Barret Browning, who was unable to stick in the Cardinals' bullpen last year after coming over in the minor league portion of the Rule 5 Draft.

Arizona Fall League alum Kevin Siegrist is the only spare lefty among the 39 members of the 40-man, but it's hard to imagine a 22-year-old with eight appearances above the high minors making the team out of Spring Training.

Assuming the Cardinals aren't ready to taunt their fans with a Michael Wacha appearance—he's struck out 13 batters in 10 innings without allowing an earned run, at last count—the player who most stands to benefit from an extra spot in the bullpen might be a righty specialist. Eduardo Sanchez has returned from a very scary 2012 season to strong reviews and five walk-free spring innings. Maikel Cleto and Victor Marte are other possibilities for low-leverage, early-season innings.

The extra spot—if it opens up—might also figure in the Cardinals' competition for the fifth spot in the rotation. Whichever of Joe Kelly and Shelby Miller loses that contest could get a 15-day reprieve from Memphis if the Cardinals decide to use the spot on a long reliever.