Two of the pitching prospects in the St. Louis Cardinals' competition to replace the injured Chris Carpenter made their first appearances of the season in Saturday's Grapefruit League opener, and the results were mixed. Trevor Rosenthal, one of the favorites, got the start, allowing four runs on five hits and two walks and failing to strike out a batter. Michael Wacha, a long-shot after striking out 40 batters against four walks in his first 21 professional innings, struck out three and allowed one hit and one unearned run in two innings. 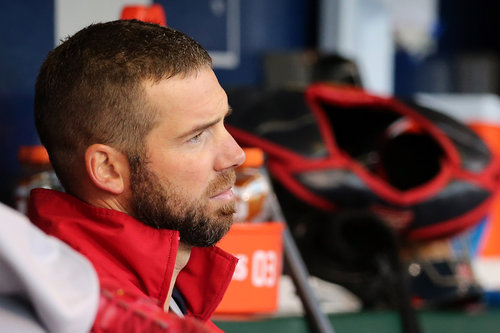 Carp's 60-day DL trip means a spot has just opened up on the 40-man roster.

I'm not going to suggest these numbers aren't useful at all, because I think this is a close-enough race that Grapefruit League performance could make the difference between Rosenthal, Joe Kelly, and Shelby Miller. But if you want a picture of how early we still are in the Spring Training season, you need only scroll down to the BASERUNNING section of the MLB.com boxscore. In fact—here, let me grab it for you:

It's that early. When Jon Jay is not lighting up the baserunning section of the box score quite this aggressively, you can start to extrapolate rotation odds from the performance of pitchers who haven't thrown in-game in several months.

In the meantime, so long as neither Trevor Rosenthal nor Michael Wacha came out of their appearance with joint pain, they're both still well within the rotation contest. In the meantime, let's just enjoy the fact that they both pitched, and that Matt Carpenter came in to replace Daniel Descalso at second base midway through the game.