The Washington Nationals are the latest team to earn a desperate share of Kyle Lohse rumors.

One of these days, the Kyle Lohse rumor mill will actually surface a team that's interested in Kyle Lohse. In the meantime it's worked a little like a Whack-a-Mole machine—one team pops up, the general manager (or some other unnamed source) knocks it back down as quickly as possible, and the Lohse rumors are moved dutifully, randomly, and quickly as possible to some other hole. This weekend's contestant: The Washington Nationals, who find themselves suddenly in the market for Gio Gonzalez insurance. (Here's Federal Baseball on yet another Biogenesis connection.) 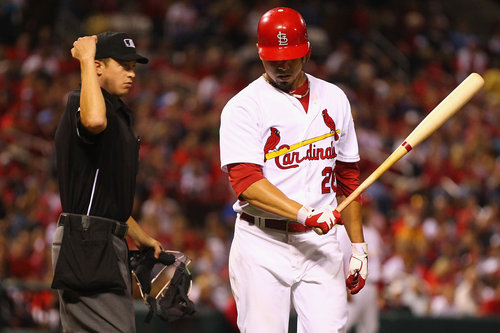 Why Kyle Lohse is uniquely ill-suited for the 2013 qualifying offer rules.

On the Lohse bandwagon: the Post and FanGraphs by way of ESPN, so far. The Nationals meet all the Kyle Lohse qualifications, post-qualifying-offer: They've already forfeited their first-rounder by signing Rafael Soriano to a $28 million contract, and they're looking to compete this year, and can therefore justify the expense of overpaying for a couple of wins' worth of rotation insurance.

All that's missing: The interest. Lohse rumors have kicked back into gear in the wake of Michael Bourn's deal, but they've been as non-specific as ever: The new scuttlebutt is no more or less than "He'll sign soon, definitely." Soon is now—so either everyone's being very discreet about the whole thing or Kyle Lohse rumors don't inspire very determined investigative reporting.

One other possibility: The Nationals plan to sign him to be the guy inside the Taft costume. After an offseason race in which he's been the designated Teddy Roosevelt, he might take the gig.