The St. Louis Cardinals' top prospect is apparently eligible for Team Canada during the 2013 World Baseball Classic. But will he play?

Here's a story I wasn't expecting to have to write: Oscar Taveras could play in the 2013 World Baseball Classic, next month... as a member of Team Canada. The Dominican Republic native, who hit .321/.380/.572 last season as a member of the St. Louis Cardinals' AA affiliate in Springfield, Missouri, has little more than an outside shot at making the big league roster out of Spring Training, assuming Carlos Beltran, Matt Holliday, and Allen Craig all remain healthy ahead of him.

On Friday, Jenifer Langosch reported that Taveras had mentioned the possibility himself. Derrick Goold has a little background to add to the story:

Oscar Taveras said his agent was approached about him possibly playing for Team Canada in WBC. He lived in Montreal briefly as a kid.

As best as I can parse the early tweets, it sounds like Taveras's agent mentioned it to him and Taveras, himself, was excited enough to mention it to everybody else. It's too soon to tell just how unexcited the Cardinals are about the news. 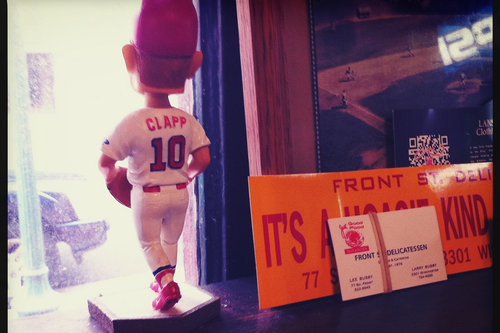 So who is it whispering sweet nothings into Oscar Taveras's ear? Who else but Stubby Clapp?

Lots of people get jumpy about the World Baseball Classic, but I can't say I'd feel very nervous about Taveras getting some extra in-game action ahead of a season in which he'll be a heartbeat away from the major leagues—a season in which the possibility exists that he'll be on the Cardinals' bench, getting almost-regular playing time, at some point during the summer.

For all that, though, as a WBC fan I'm always a little leery of the more fanciful ancestries that are used to fill out the lesser baseball nations. Much as I love Jason Simontacchi, some of the fun is lost when Team Italy, say, is mostly American minor leaguers with great-grandparents who knew Italian relatives.