St. Louis Cardinals Spring Training starts with an endorsement of the Mozeliak era

John Mozeliak earned another three-year extension after getting the St. Louis Cardinals within the NLCS-that-must-not-be-named of another World Series appearance.

Share All sharing options for: St. Louis Cardinals Spring Training starts with an endorsement of the Mozeliak era

John Mozeliak took some time out from the stalled Adam Wainwright negotiations to finish off the St. Louis Cardinals' first big contract extension of Spring Training: John Mozeliak. The Cardinals' general manager is now locked up through 2016. Two weird things about that: 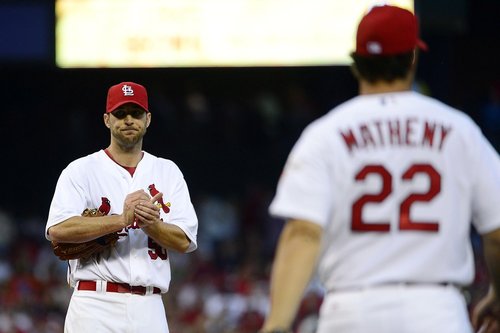 Mo should probably not start with the figure he just got in salary negotiations.

1. After Mozeliak's contract extension he's now tied to the Cardinals exactly as long as... Matt Holliday. Unless Holliday exercises his own player option. This is the weird thing about general managers: If Mozeliak had been a colossal failure, he would have saddled the next guy with an enormous contract he couldn't do anything about. Even now—after a World Series and an NLCS berth that should have been another World Series—he's exactly as secure as his biggest contract. Luckily, the Cardinals haven't had any colossal failures at GM lately.

2. Walt Jocketty lasted from 1995 to 2007. So John Mozeliak is still an extension or two away from outlasting the Cardinals' last notably successful GM.

While they were at it, the Cardinals picked up Mike Matheny's option for 2014. I couldn't come up with weird things about that, because I still have nothing much to say about him. He's very Mike Matheny, I guess; it seemed like he bunted a lot, but maybe he didn't bunt all that much. Judging managers over the course of a single year seems impossible even when they aren't just a devilishly handsome ex-player with no experience. Which I guess means I'm in favor of ensuring he'll be around for at least thee years.