Derrick Goold reports that Adam Wainwright and the St. Louis Cardinals probably won't come to an agreement in Spring Training after all.

You might feel a little out of practice, but round yourself into worrying shape: It's time to get anxious about the St. Louis Cardinals' long-term contract negotiations with a star player going into his last Spring Training again. This time it's Adam Wainwright, under contract through the 2013 season on a $12 million team option.

What can pitchers and catchers reporting tell us? 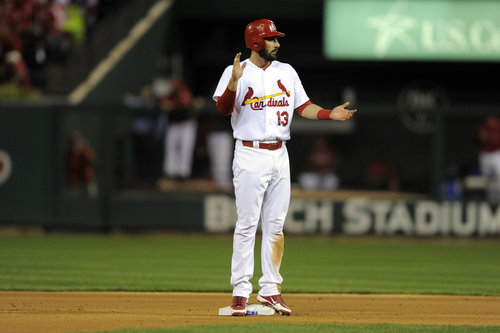 We might learn more about Matt Carpenter in February than Adam Wainwright.

Derrick Goold, reporting from Jupiter, wrote Tuesday—after a conversation with Wainwright.—that talks between the two sides were on hold. (Read his story for more details. Don't worry, I'll wait.) The Adam Wainwright situation has never played out so dramatically as the Albert Pujols situation did; there are no deadlines, no constant updates, not really even speculation about the Cardinals' offers.

But Spring Training 2013 has always been a weird target time for an Adam Wainwright contract extension. Both sides have something to gain from waiting; Wainwright's coming off a down season that wasn't, for his peripherals, a down season at all, while the Cardinals are preparing to extend a pitcher coming off elbow surgery despite having a full year left on his existing contract. It's hard to see them finding a common ground there, when each of them can imagine a more amenable contract coming in the 2014 offseason.