Share All sharing options for: Round 10, Pick 305: Malik Collymore, SS 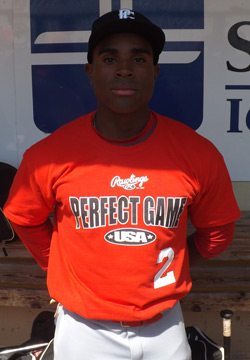 Malik Collymore is a 2013 SS/2B with a 6-0 195 lb. frame from Mississauga, ON who attends Port Credit SS. Large athletic frame with present strength. As a right handed hitter he has a leg lift trigger with high hands and a high back elbow. He has a short swing with a line drive swing plane and has good extension. He has very good bat speed with lift, hit 3 home runs in BP. He showed the ability to run with 6.54 in the 60. As an infielder he showed good footwork with smooth fielding actions and good arm strength. He showed lateral agility with soft sure hands. Excellent Student.

The six-foot, 190 pound infielder creates good leverage in his swing and already boasts solid pull-side power while showing an ability to drive the oppo gap. Collymore should get every chance to stick in the infield, but possesses enough athleticism and foot speed to shift to an outfield corner down the line, if needed.

Collymore has a tightly-wound, compact build at 6 feet and 190 pounds. He is a tick above average as a runner, shows nice infield actions and average arm strength, giving him a chance to stay at shortstop. Otherwise, he’ll make a fine defensive second baseman. He has interesting bat speed and some sneaky power for his size.