Mason Katz was selected by the Cardinals in the fourth round. Announced as a second baseman, Katz has primarily resided at first during his college career. 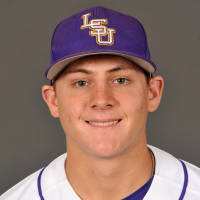 Highly touted hitter from the New Orleans area; has great pull power . . . projected as the Tigers' starting first baseman in 2013 ... the leading returning home run hitter in the SEC entering the '13 season as he collected 13 dingers in 2012

Katz has been a staple of LSU's lineup for four years and has moved all over the diamond to keep his powerful bat in the game. Katz's best tool is his power, which grades out as average. He is an aggressive hitter and squares balls up well, but scouts wonder if his long swing will be exposed in the Minor Leagues. Katz doesn't profile as an everyday first baseman, but his versatility and feel for the game mean he could be a fit as a super-utility player. In the new Draft system, seniors did very well in 2012, so Katz could benefit this time around.

Scouts don’t doubt his power but wonder if his swing will be too long to handle elite velocity. He’s a solid athlete and average runner who could handle a move back to an outfield corner. Some scouts would like to try him at third, and he played second base against Ole Miss after JaCoby Jones was sidelined by a left hand injury.