The Cardinals selected the college pitcher with the best changeup in the draft. Go figure, huh?

Share All sharing options for: Round 1, Pick 19: Marco Gonzales, LHP 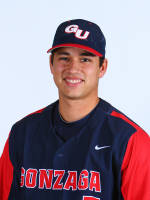 He doesn't have a high ceiling, but at 6-foot-1 and 185 pounds he's polished and is a good athlete who has played both ways for the Bulldogs. His fastball sits in the 88-91 mph range. It can get flat at times, but he paints the corners with above-average command. But he's getting drafted for his changeup, the best in this year's class. It's a deceptive offering with fade and scouts have no problem grading it as a 70 pitch on the 20-80 scale. He also mixes in an average curveball and cutter. Scouts love Gonzales' makeup and he could move quickly through the minor leagues. With his frame, stuff and athleticism he has earned comparisons to Jason Vargas.

Gonzales lacks the big fastball usually coveted by front-office decision-makers tabbing first-round targets, but the Gonzaga ace more than makes up for merely average velo by wielding the pitch with above-average command and advanced feel. He moves the heater around the quadrants and works particularly well down in the zone and inside to righties, setting up his bread and butter—a true plus-plus change-up with hard, late tumble.

Gonzales may be the best pitchability arm in this year’s draft. There isn’t really any projection remaining with his body, but he’s close to a finished product and should fly through the minor leagues. It wouldn’t surprise me if he’s pitching in the majors next season.

Gonzales is a highly polished command-and-control lefty with excellent secondary stuff, great athleticism, and a barely-average fastball. He's mostly 89-90 but will work across the 87-91 range, locating it extremely well, especially down in the zone -- he hadn't allowed a homer all year as of April 28. His changeup is plus, one of the best in this draft, at 77-79, fooling hitters more on arm speed than on action, and his curveball is average to a tick above at 75-77 with varying angles.

A classic college-trained finesse lefty, Gonzales doesn't have ace upside but he also has a high floor thanks to outstanding command of his 88-91 MPH heater, a solid breaking ball, and a superb change-up. His stats were quite good with a 2.80 ERA and a 96/25 K/BB in 106 innings with 102 hits allowed. This strikes me as a slight overdraft since there were higher-upside guys available, but the Cardinals know pitching and Gonzales won't need a great deal of time in the minors. He'd look interesting in the rotation with the hard-throwers the Cardinals have collected.

MLB.com has some video of Gonzales pitching for team USA. And some more videos: