For Being So Different, Dan Kantrovitz's First Two Drafts Have Been Quite Similar

It seemed like the Cardinals drafted an unusual number of left-handed pitchers and shortstops in 2013, but is that really true?

Share All sharing options for: For Being So Different, Dan Kantrovitz's First Two Drafts Have Been Quite Similar

In six of their first eight picks of the 2013 draft, the Cardinals selected either a left-handed pitcher or a shortstop. It was a curious strategy that led some of us to wonder if organizational need was factored too heavily into their decision making process. Viewed as a whole, however, the draft tells a slightly different story. 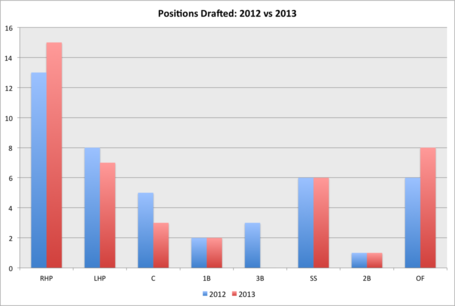 As the graph shows, the Cardinals actually selected more left-handed pitchers and just as many shortstops in 2012. Overall, the distribution of positions taken in 2013 looks pretty similar when compared to 2012. The exception is with third base, a position the Cardinals drafted in half of their first six picks in 2012 (though Stephen Piscotty has since moved to the outfield).

The difference between 2012 and 2013, of course, is how the Cardinals used their first ten rounds. Because of compensation picks, they drafted a total of fourteen players in the first ten rounds last season. These fourteen players only included one left-handed pitcher (Tim Cooney) and one shortstop (Alex Mejia). Compare that to 2013 when the Cardinals used four of their first seven picks on left-handed starters (Marco Gonzales, Rob Kaminsky, Ian McKinney, and Jimmy Reed). Factor in three shortstops (Oscar Mercado, Chris Rivera, and Malik Collymore) and the Cardinals invested seven of their first eleven picks on either a left-handed pitcher or a shortstop.

Even though the above graph demonstrates a sort of flaw in the general consensus (around VEB) surrounding the Cardinals' 2013 draft, the notion still makes sense considering how heavily the Cardinals leaned on those positions in the early rounds. After all, we expect those names that get called the earliest to have the better chance to make it all the way from rookie ball to St. Louis. But, as Derrick Goold reminded us last week, the Cardinals have shown a knack for finding late-round talent in recent years, so we shouldn't completely sleep on names taken after the tenth round.

The graph below is meant for descriptive purposes. That is, I don't think it speaks to any particular trend, but I do find it interesting to see a breakdown of which positions the Cardinals have drafted out of high school in the past two seasons. In general, it looks like they take players positioned on the tougher end of the defensive spectrum along with a few pitchers sprinkled in for good measure. This makes intuitive sense as one would expect the better athletes to man the tougher positions at the high school level. I'm guessing the same would hold true for other organizations as well. 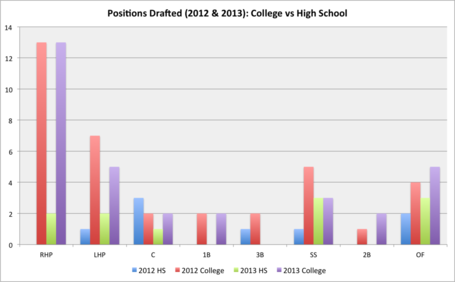 I was somewhat surprised to learn that the Cardinals drafted a higher percentage of players out of high school this season. Eighteen percent (8 of 44) of the players selected in 2012 were high schoolers while twenty-seven percent (11 of 41) were high schoolers in 2013's draft. Zeroing in on the first ten rounds again, the Cardinals selected two high schoolers in 2012 compared to five in 2013 despite having three fewer draft picks in those rounds. I would have predicted more early-round high-floor selections given how many prospects have graduated from the farm system this season, but this analysis shows that they weren't averse to taking on projects in the early rounds, at least comparatively speaking to last season.

Dan Kantrovitz has publicly declared his elation concerning the 2013 draft:

WOW! Thanks to all of our scouts and others, we had an amazing 3 days. Excited about every pick!

But just in case you are not literally excited about every single pick, here's some more reading for you to develop a more informed opinion: