Some random notes from a weekend trip to see the Memphis Redbirds.

Share All sharing options for: First-hand Observations from Memphis

This past weekend, I had the pleasure of visiting Memphis to watch a few games in person. Readers beware. I am not a scout and don't pretend to be one. I'm much more comfortable with developing opinions about players based on the numbers they generate over substantial periods of time. Since I have not been trained on what to look for when evaluating prospects to tease out mechanical/character issues, please take what I say with the smallest grain of salt.

That being said, it was a blast to see some of these players in the flesh for the first time, even if the parent club has pilfered many of the prospects that began the season in triple-A. Friday featured Carlos Martinez's third triple-A start and, on Saturday, Oscar Taveras' return from the DL was an unexpected treat. What follows are my general observations. All of the velocity reports are from the stadium's gun as I was not sitting near any scouts. 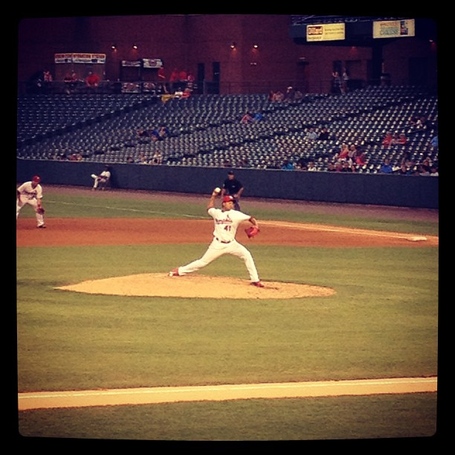 Martinez fell behind the first batter he faced but recovered to strike him out on a 94-mph fastball. He then proceeded to strike out the third batter on a 91-mph fastball. Despite an inauspicious start to the second inning that included a double and walk, Martinez started the next guy off with an off-speed strike and, ultimately, ended up escaping the frame unscathed. He kept opposing bastmen guessing in the third by striking out the first hitter with 96-mph heat at the knees but then dropping a curveball in for a first-pitch strike to the next guy. The lone run that scored against Martinez in the fifth inning was on a ground ball that split the infield.

Overall, I was quite impressed with Martinez. Even though he was wild at times (2 walks and a wild-pitch), he missed enough bats and showed a willingness to use a variety of his pitches at different points in the count. Furthermore, Martinez had a great energy in that he would do a hop and a skip and then run towards the mound when entering the field of play, as if to suggest that he couldn't wait to start pitching. I'm willing to bet Nashville Sounds hitters weren't so eager to step in the box against him.

Wong seemed to live up to his reputation as a strong character type. On Friday, he was the only player I noticed spending a significant amount of time signing autographs for a group of little leaguers who had gathered near the Redbirds' dugout. Wong only reached base once in the two games I attended, but his one hit was truly a rocket to right field, and it came off of a lefty, a reminder that Wong has not performed worse against lefties in his minor league career to date. In another at-bat, Wong couldn't check his swing on a pitch in his eyes. Maybe he still has some work to do in the way of plate discipline.

In the field, Wong was dependable but not eye-opening. On one play to his left, Wong was pretty casual in throwing the ball to first base and, consequently, the runner turned what should have been a routine play at first base into a bang-bang play. Two other times, Wong was unable to range far to his left/right to corral balls destined for the outfield. The ball appeared to glance off of his glove in each instance and, while he didn't dive either time, it would have required an exceptional play to turn either hit into an out. To be fair, he probably wouldn't have had a play even if he would have successfully corralled one of these balls by diving. 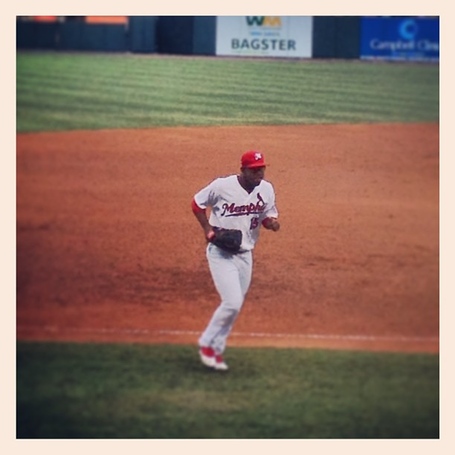 When I planned this trip, my hope was that I would be able to catch Oscar Taveras before the Cardinals called him up. His ankle injury threatened to foil my plans but, much to my delight, Taveras returned from the DL on Saturday night. His violent swing is as advertised. On Taveras' one hit, he stayed back on an outside pitch and laced it to left field for a stand-up double.

I was less impressed with Taveras' play in center field as he took some inefficient routes to at least a couple of balls. Then again, maybe that was just Taveras shaking off the rust from sitting on the bench for the past month. He kept the routine plays looking routine, however, and that's probably all that the Cardinals would ask of him anyway.

Honestly, Taveras' running seemed impaired at times, leaving me to wonder if his ankle has totally healed. I should add that he was able to turn it on when needed, so maybe it's manageable enough. Let's hope his absence from the lineup on Sunday had more to do with the team's caution and less to do with how he was feeling.

The further unraveling of Mitchell Boggs was painful to behold. Nothing went right for him. He tried to keep a runner honest at first base but, instead, allowed a run to score when the first baseman couldn't corral his throw in the dirt. In the first inning, two of three outs were deep fly balls and Jermaine Curtis had to backhand a hot shot down the third base line to prevent another run from scoring. Later in the game, Boggs started getting some ground balls, but he threw wide when trying to get the lead runner at second base and then beaned a guy with the bases loaded.

The highest velocity reading I noticed for Boggs was 93-mph, but he was frequently closer to 90-mph. That's slower than usual for him but not unexpected given his current role, which is to pitch several innings for Memphis. Should he return to the bullpen at some point, I'm assuming he could max out his effort and hit 96+ again.

Jorge Rondon's velocity was not as impressive as I hoped given some reports on the right-hander. His fastest offerings were 94-mph and not the 96+ we've grown accustomed to drooling over these days.

Speaking of velocity, Nick Additon never cleared 85-mph as far as I could tell. Obviously, he had an uncharacteristically horrible outing (4.1 IP, 4 R, 6 H, 6 BB, & 5 K) on the day I saw him, but I was surprised at how many swings-and-misses he got with such low velocity stuff.