The Thing About Ryan Jackson

It sure has been fun to see Ryan Jackson light up triple-A but let this post serve as your cold shower.

Share All sharing options for: The Thing About Ryan Jackson

First, Ryan Jackson was the best defensive infielder in the Cardinals' farm system. Then he was exiled when Pete Kozma, who was behind Jackson on Memphis' depth chart, surpassed him on St. Louis' depth chart, presumably because Kozma had a short-lived career as a warlock. But now that the date on the bottle of Pete Kozma's magic potion has expired, people are clamoring for Ryan Jackson again.

Keith Law may have had something to do with this:

I'm all for Ryan Jackson getting another chance, but I get the sense that his promotion is being demanded for all of the wrong reasons. Jackson's batting average (.384), on-base percentage (.465), and slugging percentage (.518) are unrecognizable from previous seasons. It's easy to get excited when a player suddenly starts performing at a higher level, but we need to look beyond those numbers for confirmation that what we're seeing is really as impressive as it seems. Often, it isn't. 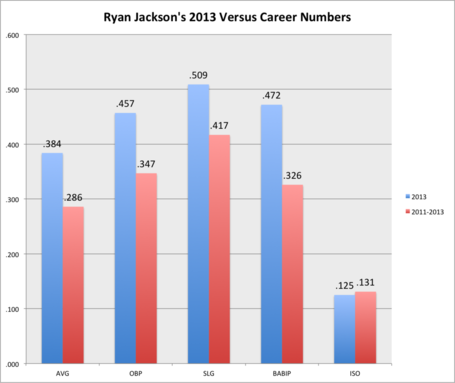 The more impressive numbers that differ so much from Ryan Jackson's minor league career to date quickly gain perspective when we consider how fortunate he has been on balls in play. Sure, Jackson has created some of his own luck by generating an impressive amount of line drives (23%) but even that cannot explain nearly half of his balls in play falling for base hits.

Isolated power (ISO), a statistic that basically removes singles from the equation, is actually a few points lower this season than it has been in Jackson's minor league career. That Jackson's isolated power has remained unchanged since 2011 (his year in double-A) exposes him as a player who is relying on a ton of singles to inflate his offensive value. His numbers will take a hit once more of those singles start finding gloves.

That's not to say Jackson will be worthless offensively. According to FanGraphs' wRC+, he was an average batsman (99 wRC+) in 2011 for Springfield and slightly worse (89 wRC+) in his first year playing for Memphis in 2012. Translating that sort of performance to St. Louis would make him an adequate shortstop, especially considering his defensive reputation.

He's got a solid defensive reputation, featuring decent range and arm strength, excellent instincts, and outstanding reliabiilty: he made just 12 errors in 102 games at shortstop for Memphis and zero errors in 13 games at second base. Although he doesn't have super-amazing range, he makes the plays he needs to make and there's no doubt about his ability to play shortstop regularly from a defensive perspective.

I don't mean to completely disregard Ryan Jackson's surprising start to 2013. He deserves some credit for making better contact (23% line drives) and walking more often (11%), especially when considering how he could have reacted after being displaced on the depth chart by Pete Kozma and possibly Greg Garcia. Billed as Memphis utility infielder to start the season, Jackson has appeared at shortstop in almost half of Memphis' games and could get even more playing time there with Greg Garcia landing on the disabled list on May 11th.

So go ahead and ask for Ryan Jackson. I'm with you. Just realize that an argument for Jackson has more to do with his glove and less to do with offensive potential. Objectively, I'm wondering if he shouldn't be more of a threat to Daniel Descalso than Pete Kozma. Descalso can't really play shortstop and has only been out-hitting Ty Wigginton, Tony Cruz, and the pitchers. And then again, even having to engage in this conversation might just be Ty Wigginton's fault, as Dan reminded us on Saturday.