The Cardinals pledged to rely more heavily on player development back in 2007 and, now in 2013, they have been recognized as having the industry's best farm system. That's great and all, but have their advancements translated into more Wins at the major league level?

Share All sharing options for: The St. Louis Cardinals' Homegrown WAR Since 2007

In October 2007, Bill Dewitt fired Walt Jocketty less than a year after the organization had won its tenth World Series championship. To help you revisit that time, here's a quote from Dewitt addressing Jocketty's sudden dismissal (found in Nate Latsch's MLB.com article):

"I think that we had a little different philosophy and vision with respect to some baseball issues," DeWitt said. "There was clearly tension that was reported widely, not only locally but nationally in the organization. While I've said on several occasions that tension is in every organization, I do think it got to the point with the Cardinals that it was counter-productive. We couldn't achieve our objectives given what was going on inside the organization."

Jocketty took umbrage at the 2006 promotion of Jeff Luhnow, who had been head of amateur scouting, to a position that oversees both scouting and player development. The move came at the expense of Bruce Manno, one of Jocketty's aides.

As noted by Derrick Goold, the Cardinals highest Baseball America farm system ranking between 2000 and 2007 was just twenty-one. Six years later, that's certainly part of what colors our satisfaction in having the industry's number one ranked system here in 2013. Luhnow is responsible for much of this, of course, since he remained in charge of drafts until 2011. Over time, Luhnow's presence became a symbol of the organization's willingness to incorporate more advanced metrics into the decision making process. And so now that the Cardinals' player development efforts have earned the highest praise from third party outlets, it also represents a validation for the more sabermetrically inclined corners of the organization and/or fan base.

This all got me thinking. Would the numbers support popular sentiment that the Cardinals have relied more heavily on homegrown players? To answer this question, I simply counted the Cardinals' total Wins Above Replacement (WAR) and compared it to their drafted WAR, or Wins produced by internally developed players. I used Fangraphs' version of WAR for position players and Baseball-Reference's version of WAR for pitchers. I chose B-R's version of WAR for pitchers because it incorporates actual runs allowed into its formula, so some have argued that it more accurately reflects the value teams actually received from their pitchers rather than the value they should have received based on pitchers' individual performances. Read all about the differences between these two types of WAR in the Fangraphs glossary.

In general, players were considered homegrown if they made their professional debut with the Cardinals. Therefore, Adam Wainwright and David Freese are included in these WAR totals despite being drafted by the Braves and Padres, respectively. It makes sense to credit the Cardinals for having raised them since they never appeared above double-A for their previous teams. Besides, the Cardinals were savvy enough to acquire them in the first place.

Just by eye-balling that table, you can see that, in general, the Cardinals have gradually realized more production out of their homegrown players since 2007. Below, you will find a graph I created from the above numbers. Click it for a larger version. The blue line represents the Cardinals' total team WAR, the red line homegrown WAR, and the green line WAR from outside acquisitions. 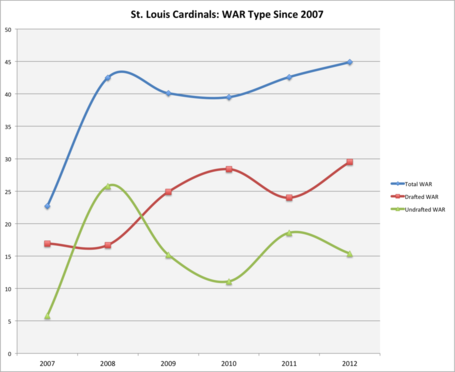 Total WAR has increased over time, and this is largely due to greater contributions provided by homegrown players, as you can see that the red line has been inching upwards while the green line has trended in the opposite direction. The Cardinals started phasing out acquisitions such as Adam Kennedy, Juan Encarnacion, and Kip Wells (all below replacement level players in 2007) and promoted from within, entrusting the margins of the roster to internal candidates.

The green and red lines intersected in 2009, a landmark that meant homegrown products were adding more Wins to the Cardinals than outside acquisitions. By trimming the roster fat, the Cardinals were able to create opportunities for Brendan Ryan, Colby Rasmus, and Skip Schumaker, three players who combined for 7.5 Wins that season.

Time All of this becomes even more impressive when you consider how the Cardinals have remained competitive despite implementing such a shift in philosophy. Last season, the Cardinals' farm system was able to produce its highest WAR total since 2007 despite losing Albert Pujols thanks to four position players (Yadier Molina, David Freese, Jon Jay, and Allen Craig) who were each worth three or more Wins.

Time will tell if the Cardinals can sustain their success following Luhnow's exit, but the Kantrovitz era seems to have gotten off to a pretty solid start given the high rankings (questionable, in some cases) some of his picks have earned since his first draft. Six of his prospects (Michael Wacha, Stephen Piscotty, Carson Kelly, James Ramsey, Steve Bean, and Patrick Wisdom) ranked on Fangraphs' top-15, three (Wacha, Wisdom, and Kelly) in Baseball Prospectus' top-10, four (Wacha, Kelly, Wisdom, and Piscotty) in John Sickels' top-20, and three in our very own top-20 (Wacha, Kelly, and Piscotty). With any luck, those red and blue lines will continue creeping upwards.