The Cardinals were just two wins away from winning their third World Series in eight seasons. Given the praise heaped upon their player development system, now seems like an appropriate time to revisit just how much production was generated by homegrown talent compared to previous seasons.
Production was measured by Wins Above Replacement (WAR), though I relied on Baseball-Reference for pitchers and FanGraphs for hitters. For an explanation of why I chose this method or if you're wondering which players were categorized as homegrown, please see my initial post from March. Back then, I was merely interested in learning whether or not the Cardinals had been able to produce more Wins from within the organization since firing Walt Jocketty in 2007, which is about the time they started publicly declaring intent to enhance a farm system that had ranked in the bottom third of teams since 2000 (at least according to Baseball America).
Above is the same table that I created in March with the addition of three extra rows for the 2013 season. Notice how the Cardinals' farm system not only yielded the most Wins since 2007, but total Wins were also the highest in this time frame. Here's an even better visualization: 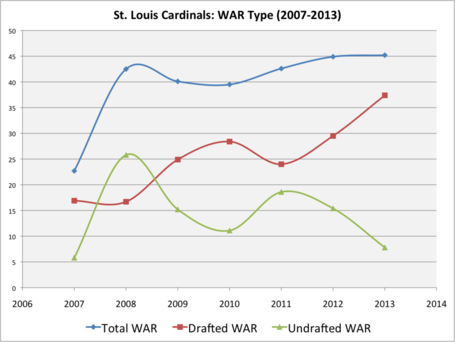 That the organization has been able to overhaul its farm system while also remaining competitive, and arguably improving, is quite an impressive feat considering the personnel lost in the meantime: Walt Jocketty, Albert Pujols, Tony La Russa, and Dave Duncan to name a few.
Just prior to the NLCS, Bernie Miklasz chronicled the vision of Bill DeWitt Jr. who reflected upon the dividends of insisting that the organization shift its priorities to player development, even though it ruffled the feathers of well-respected baseball men who clung to traditional points of view:

"Because frankly there was a lot of criticism during that time. And our transition into the model we developed was not easy. But I knew longer term that it was the way to go. And to have it play out the way it has, I feel very good about it."

But DeWitt also cautioned against complacency:

"... I know it can go (bad) on you, too. You have to keep on it, every year and every day. And make sure that there are new ways of doing things and new ways of getting information that we take advantage of and not just say 'Oh, we've got it all figured out.' Because no one in this game never really figures it out."

Pushing the blue line (in the graph above) further upwards is a tall but not unthinkable measure. Swap out Carlos Beltran (worth 2 Wins in 2013) for Oscar Taveras. Replace Edward Mujica (1.5 Wins) and Jake Westbrook (-0.6 Wins) with healthy Jason Mottes and Jaime Garcias or a combination of the other MLB-ready pitching prospects available, and squeezing out more internally developed Wins is at least a possibility. But factor in unexpected injuries, regressions, free agent signings, and Pete Kozma's inevitable replacement, and who really knows?
Perhaps the 2013 season represented a zenith of sorts for the DeWitt initative. The farmhands' contributions certainly weren't lost on Future Redbirders. A few more stats to behold: