St. Louis Cardinals 2014 Preview: Out Percentage, the negative flip side of OBP

Baseball is a game in which even the most successful batters fail the majority of the time, so let's focus on the negative.

Share All sharing options for: St. Louis Cardinals 2014 Preview: Out Percentage, the negative flip side of OBP

Reaching base safely is the most important thing a batter can do. There are varying degrees of success in doing so, from a walk to a homer, but a batsman's goal boiled down to its essence is to get on base. This is perhaps best recognized by approaching a plate appearance from the pitcher's point of view. What is the pitcher's goal? To induce an out.

If the pitcher's goal every time he throws a pitch is to generate an out, the most desirable offensive players are those that are difficult to get out. As batters, they have high on-base percentages (OBP). Put another way, they have low out percentages (OutP). You won't find OutP on a baseball stats website, because I made it up. I think looking at the negative flip side of OBP helps give us some perspective on how important that skill is in the game of baseball. 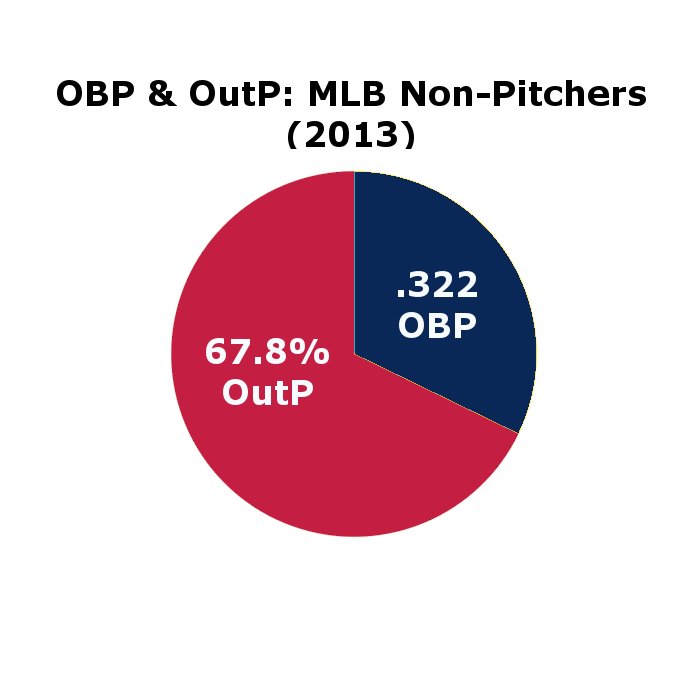 MLB players who aren't pitchers reached base safely at a .322 clip last year. That is, they made outs 67.8% of the time they took a PA. At 65.8%, St. Louis position players made outs last year at a far lower rate than MLB non-pitchers as a whole. The following chart shows how the various teams, including the Cards, fared in OutP a year ago. 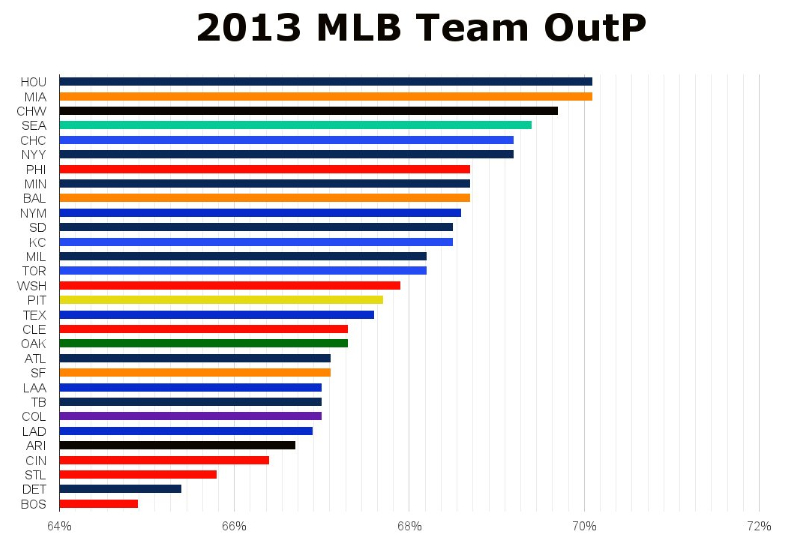 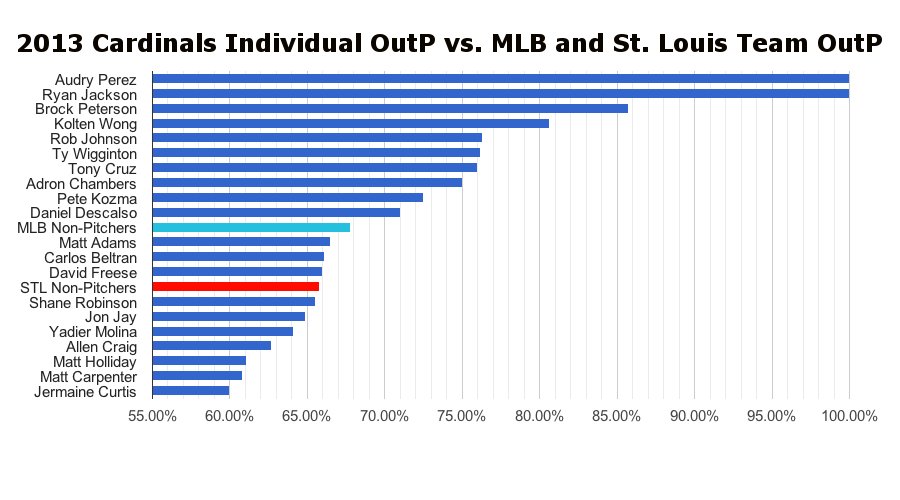 The only regulars from last year's St. Louis club who made outs at a rate higher than the MLB average were Pete Kozma and Daniel Descalso, the players who shared shortstop duties. Impressively, the vast majority of 2013 Cardinals position players made outs at a rate below the non-pitcher MLB collective rate. El Birdos' NL-leading runs-scored total (which also tied the A's for third overall in MLB) rested on a foundation of being difficult to get out.

This year, the cast of characters will be a bit different. Will the Cards be able to maintain their difficult-to-get-out ways?

To see what we might expect in the season to come, I decided to use the various projection systems. I took an average of various projections for each Cardinals player with a chance to open the year on the 25-man roster (and Oscar Taveras). I used the averaged projection to calculate each player's forecasted OutP. Then I put them in the following graph, which compares them to the MLB and Cardinals 2013 OutP rates. 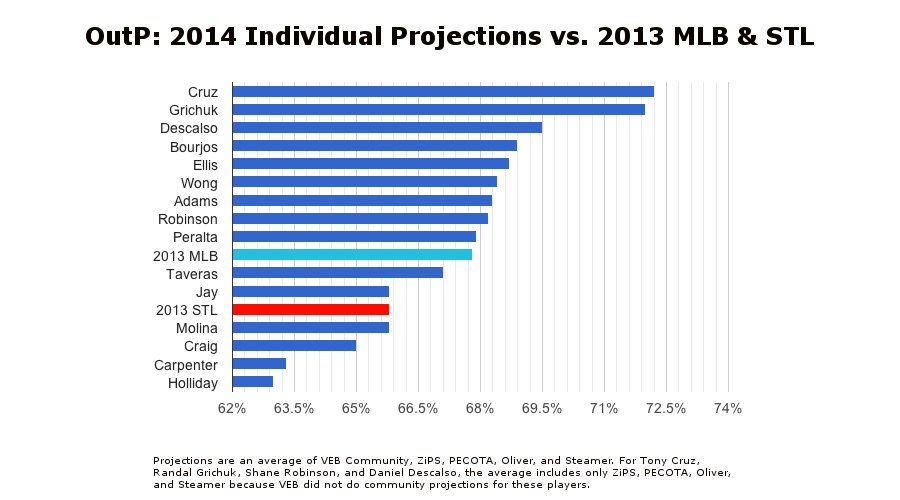 Bourjos, Wong, Adams, and Peralta will likely comprise half the Cards' non-pitcher starting lineup for many games this year. According to an average of the various 2014 projections, these players will give the opposing pitcher an out more often than the 2013 MLB average. Except for shortstop, which will likely see outs made at a far lesser rate by Jhonny Peralta in 2014 than the out-making black hole of Kozma and Descalso a year ago, St. Louis will be starting players who make outs at a higher rate than the club got at their respective positions during last season's 97-win campaign. A lot has been made about the Cards' power-hitting as we near opening day. Perhaps there should be more concern about how much more often they'll be giving the opposition an out.

Correction: The original chart comparing 2014 averaged projections and the 2013 MLB and St. Louis totals did not include Yadier Molina. It has been corrected to included the Cardinals catcher.