We can't know the Albert Pujols who picked the St. Louis Cardinals

This week's series against the Los Angeles Angels makes it impossible to avoid Albert Pujols, but it doesn't make it any easier to recreate the one who almost signed with the Cardinals.

Share All sharing options for: We can't know the Albert Pujols who picked the St. Louis Cardinals

It's been easy for me to ignore Albert Pujols's career-to-date with the Los Angeles Angels because that's exactly what I intended to do from the moment he and the St. Louis Cardinals stopped negotiating. It wasn't out of spite, or disappointment, or anything—I just didn't want to spend the next 10 baseball seasons wondering about the kind of career he'd have on his way to the Hall of Fame and one of those standing-O-generating red blazers.

Now the Cardinals are visiting the Angels, and I've got no choice: I have to look at Albert Pujols's Baseball-Reference page and watch some game footage, even though I'd much rather talk about Mike Trout all week.

It wasn't as hard as I thought it would be—he's actually been slightly better than I thought, this year, given the sheer volume of eulogies I've quickly scrolled past since April. But it wasn't as telling as I thought it'd be, either; it left me basically in the same place I'd started.

That is: However much this week's series inspires us to look back—and back-forward, at the future we won't get—we can't know much of anything about the alternate-universe Albert Pujols the Cardinals did manage to sign. He doesn't exist, and he won't exist. 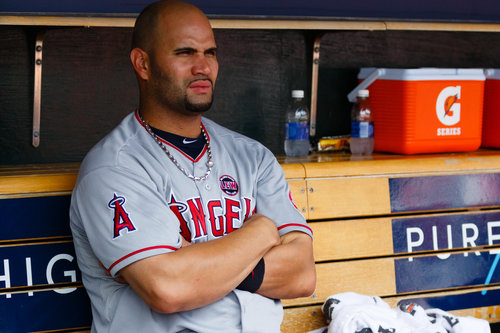 The Pujols who will play host to the Cardinals this week in Anaheim is not the player his former teammates and Cardinals fans remember. The machine-like production has ceased.

He might have been better than the one the Angels got, but that's the least productive thought experiment; as bgh wrote yesterday, there's an abrupt downward slope to his performance that begins, now that we can see its middle, at the end of his Cardinals career.

It tracks with our deepest, most secret Pujols fear, too—the fear that he would eventually become an ordinary hitter, and that his unstinting parade of limps and grimaces and compromised stances were the early stages of a process that couldn't be stopped.

It began as the fear that we'd only get one glimpse of the insane, perfect, healthy Albert Pujols who carried the Cardinals in April of 2006, hitting 14 home runs and striking out seven times. It metastasized when he hit 30—when he just missed a .300 average and 100 RBI, despite a heroic late-season run at both numbers. And it was active enough that offseason that a significant minority of regular fans, the spreadsheet-and-basement averse in Pujols sherseys, were guardedly optimistic about not signing him.

That was easiest to see when fans from out of town told us about their Albert Pujols. Their Albert Pujols was a little cold. He was bitter before his time. He seemed small like Tony La Russa seemed small—driven by some slight that was either inconsequential or nonexistent—and he stared at each home run forever. God, just start running, already, if you're such an icon of baseball virtue.

All those flaws were certainly visible from inside Busch Stadium, but they were irrelevant. We got all of the stories about his charity work and his lovely family, for one thing, and we benefited from each interminable home run trot. More importantly, though, we had decided that Albert Pujols—like Stan Musial, like everybody St. Louis's baseball fans love—represented, with his cool perfectionism and off-the-field humility, baseball as it was supposed to be played.

The Angels' Albert Pujols is just a fascinating baseball problem.

That's the strand of his career we lost when he signed with the Angels, and it's not one we can rebuild in any satisfying way. Assume the same stark decline in his on-the-field skills and we still can't understand 2012's postseason comebacks and collapses in relation to it. Admire his surprising insistence that the Angels wear Musial patches in Anaheim and we still won't have his reaction in the moment, the obvious heir to Musial as St. Louis's perfect regular guy.

The saddest facet of Albert Pujols's decline is that it's happening far away from anybody who cares about it. It's a fascinating baseball problem, now—what will the Angels do with this enormous contract? If it were happening in St. Louis, we might be angry about it. We might wish, aloud, that somebody else had overbid on him. We'd commemorate each magic number with standing ovations that verged on condescending, because we wouldn't know what else to do.

And whatever we thought about Albert Pujols, we'd be thinking it constantly. But until this week I hadn't thought about him at all.