Tyler Lyons pitched 32.2 innings in the majors before being optioned to AAA. Was there a reason for his demotion hidden among the stats?

Share All sharing options for: Tyler Lyons: A Post-Mortem

Earlier this week, Tyler Lyons found himself on his way back to Memphis. After 6 starts, 32.2 innings and a 5.51 ERA, the Cardinals decided to head in a different direction. Aided by a schedule that has minimal need for a 5th starter in coming days and a former starter in the bullpen (Joe Kelly), Lyons begins a hiatus from the majors as he goes to pitch for the Cardinals AAA affiliate.

It's difficult to say whether Lyons will have another opportunity with the big league club this year. John Gast will eventually be ready to come off the disabled list. Michael Wacha and Carlos Martinez are both in the Memphis rotation as well. The Cardinals plethora of arms makes for fierce competition when spots do open up. (Credit Shelby Miller for never casting doubt on whether he'd stay in the rotation.) Lyons isn't a guarantee to make it back to the big leagues this year or in the future. His path to the majors as a left handed reliever might be clearer but he's had success as a starter throughout the minors.

So where did things go wrong? Let's start with what Tyler Lyons was before the majors. A left handed starting pitcher with a fastball that sits between 88-91 mph whose primary secondary pitch is a slider and also has a functional changeup and curveball. He's not a complete junkballer but Tyler Lyons was not lighting up radar guns. The biggest component of his success in the minors was his remarkable control issuing walks in less than 5% of plate appearances during his time in Memphis stretched over two partial seasons and 130+ innings.

When Tyler Lyons made the majors, his stuff didn't change. This isn't a Lance Lynn story where a pitcher makes a major adjustment right before hitting the majors and looks like a completely different players. Lyons game in the minors was supposed to be his game in the majors. That didn't really pan out.

From a results perspective, the issue was pretty simple. Lyons saw his walk rate rise and his strikeout rate dip. There's little evidence that Lyons results were a "luck" issue either. His BABIP was .277, which would actually lead us to believe he was getting a bit lucky on balls in play, and his strand rate was 59.3% in the majors, which is below average and potentially a bit unlucky. (Strand rate is lower for worse pitcher's because those pitchers tend to allow more hits overall anyway. If you have a bad strand rate and are a bad pitcher, it's hard to consider that bad luck.)

Let's try and dig a little deeper. In the minors, Lyons had no discernible split. He'd faced significantly more right handers in the minors but had generated a 3.41 FIP as compared to a 3.55 FIP against left handers. Lefthanders tended to strikeout more against Lyons but that's not a big surprise and overall the numbers are close. That lack of a split mostly held true in the majors as well with one notable exception: right handers started drawing more walks. Tyler Lyons repertoire (namely that changeup) allows him to pitch to opposite handed hitters in the minors but players in the majors weren't missing that pitch as frequently. Following this thread, Lyons changeup was actually a negative value pitch in the majors*.

Tyler Lyons had banal plate discipline numbers. He spent as much time in the zone as any other pitcher. He threw as many first pitch strikes as the average pitcher. He generated a reasonable number of swinging strikes -- actually enough swinging strikes as to make his strikeout rate overall look low. What stands out are the contact rates. When players were swinging at pitches outside the zone, they made less contact than they did against the average pitcher. When players swung at pitches in the zone, they made more contact than the did against the average pitcher.

What to make of that? The latter point is the easier point. Hitters were getting a hold of Lyons when he worked in the zone. That is normally attributable to a pitcher's stuff. Tyler Lyons doesn't have the stuff to work in the zone frequently without getting beat up. What's odd is that, out of the zone, his numbers are actually better than average. This could all be a small sample size issue -- we're looking at 32.2 innings worth of pitches -- but it's kind of a weird mix. Are players chasing bad pitches out of the zone due to lack of familiarity with Lyons' stuff? Are they crushing pitches in the zone? It's hard to say why these two things are happening. All we can say is that hitters made more contact than average against Lyons in the zone and less contact than average against Lyons outside the zone. I am personally inclined to attribute that to his fastball (weak) compared to his secondary pitches (strong) but that is speculative on my part.

Here's a visual representation of Lyons' problem. Note that he can't seem to get players to swing and miss at anything in the zone. It's only when they chase low and away (like a slider) that you get a whiff. 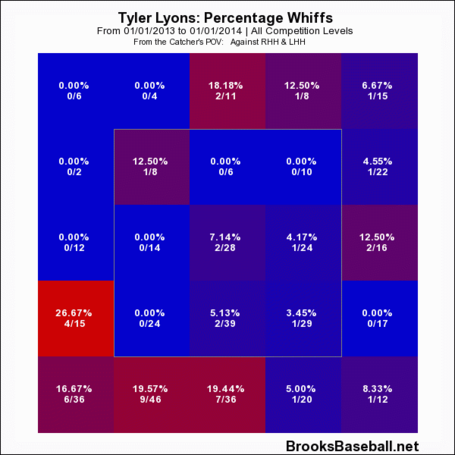 It's far too early to say that Lyons has no future in the majors. This is a player that had a 3.47 K/BB ration in the minors and a 4.7 K:BB ration in AAA. There may not be an easy recipe for success. It's not hat Lyons command went to hell in the majors or that he suddenly tried to be a fastball pitcher. There's not an obvious reason for "failure" among his stats that I can see. The question is how to fool major league players more in the zone ... if you can. Unable to do that, how do you get players to chase your pitches out the zone with a higher degree of frequency? Again, neither of those are necessarily easy questions -- heck, they may not be the right question at all. Lyons could look like a star in his next 32 major league innings by not changing a thing. Such is the nature of 32 innings. That said, something probably needs to be tweaked or worked on. Tyler Lyons just has to hope he gets another chance to test himself in the majors.