The Cardinals have a decision to make at shortstop, and it's both difficult and not especially consequential.

Ryan Jackson is nothing if not persistent. Earlier this month he was hitting a BAbip-heavy .341 and I suggested he simply didn't have enough gravity, as a Cardinals prospect, to Wally Pipp Pete Kozma so long as Kozma was doing his replacement level thing.

It's easy to discount Jackson's season so far, and necessary, even though his breakout is now 50 at-bats longer than Kozma's was last year. But the problem, as Bernie Miklasz discussed earlier this week, isn't whether Jackson should replace Kozma, but whether Jackson is good enough to be on the 25-man roster, taking at-bats from him.

Toward a Unified Theory of Ty Wigginton 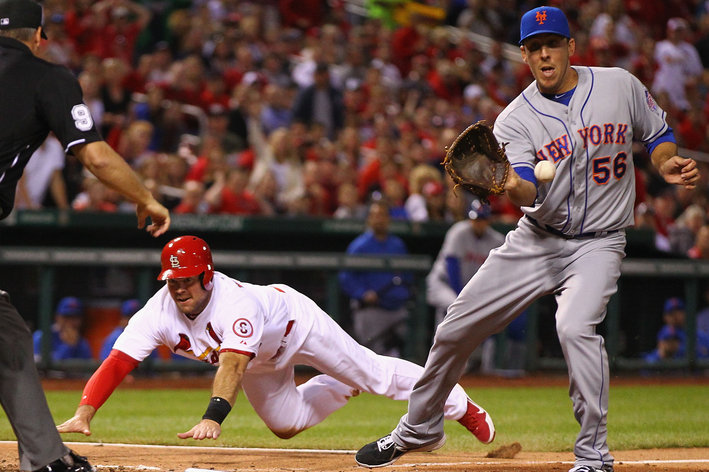 The St. Louis Cardinals signed Ty Wigginton because the slower he gets, the more like Ty Wigginton he becomes.

That answer is almost certainly yes. But the Cardinals' weird bench construction on the infield has forced them into a situation in which their replacement level is lower in the major leagues than it is in Memphis.

Yes: This is another thing that is Ty Wigginton's fault. Ty Wigginton has taken seven more plate appearances than Adam Wainwright. He's played 40 innings on defense.

There's a cost to having a Ty Wigginton on your team—one roster spot—that used to be much simpler for teams to absorb. Before bullpens got huge and hyper-specialized you could afford to stash a third catcher or a backup-backup-pinch-hitter who was really just a good clubhouse guy on the 25-man roster, because what were you going to do with 25 men, anyway?

In the last 20 years teams have mostly gone with lefty specialists instead of clubhouse specialists. The cost of trying to do both isn't just Wigginton's at-bats—it's the way it makes the positions he's supposed to be backing up worse, the inefficiencies it creates.

And the weird thing is that the 2013 Cardinals seem desperate to prove how inefficient he can make them. Every player he touches on the depth chart is locked in a slump—David Freese, Daniel Descalso, Pete Kozma—and every player he's blocking (Ryan Jackson, even Matt Adams) is off to an unexpectedly strong one.

Getting regular playing time has been good news for Jackson, who wasn't even assured of a regular job in Memphis after last season. But he's done everything the Cardinals could have hoped he would with those at-bats, and the big league team's absurd bench construction has forced us to think of the Cardinals' infield in terms of Jackson or Kozma when that shouldn't be the question at all.

This is the question Ryan Jackson, a 25-year-old prospect with diminished defensive scouting reports and a limited history as a hitter, should be answering: Wouldn't it be nice to have another genuine middle infielder with a little offensive upside to turn to when Descalso, Freese, and Kozma are all struggling?