Hoping the St. Louis Cardinals will trade for a shortstop this year? Put these prospects together and hash something out.

The St. Louis Cardinals have announced their intent to start the season with Pete Kozma at shortstop, but that's certainly not the same as announcing they'll finish the season with Kozma at shortstop. They've put together an impressive run of top-prospect-list successes, but that doesn't mean all those prospects will ever be cornerstones of the Cardinals' major league roster. That is: The first four months of the 2013 season are going to give us a lot of opportunities to pretend we're Walt Jocketty.

For Cards, it's not Pete Kozma or bust quite yet 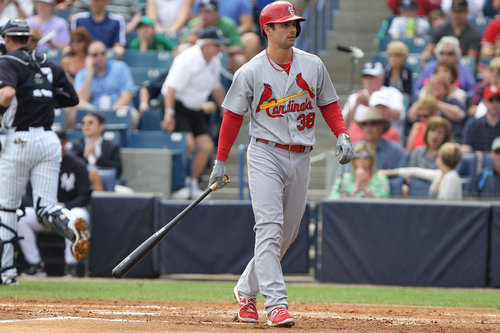 The Cardinals released Ronny Cedeno, but they still have other in-house options.

When the mood strikes you, then—when the Asdrubal Cabrera trade rumors return to MLBTR, when reliable sources indicate that Elvis Andrus wants out of Texas, when Troy Tulowitzki is spotted in Lambert Airport—refer back to this shortstop trade construction set, and build the perfect deal.

Oscar Taveras: Don't do that. The Cardinals aren't going to trade him straight up for Jurickson Profar, because that's the kind of deal that will get you nicknamed John "The Guy Who Traded Oscar Taveras For Some Shortstop" Mozeliak. They probably aren't going to trade him for Troy Tulowitzki, because that would involve trading a bunch of expensive wins for a bunch of cheap wins.

Lots of other prospects in the construction set. Let's just skip down to the next H tag and pretend this never happened, okay? I'm not mad, I'm just—disappointed, is all.

Shelby Miller: By the time the Cardinals are ready to trade for Pete Kozma's replacement Shelby Miller might be all moved in as Chris Carpenter's replacement, which makes this one a little tough to imagine. Still (still!) a consensus Top 10 prospect, Miller would anchor one of those really unlikely superstar trades but is probably overkill for any other move.

Trevor Rosenthal: Lee's Summit would enact a bloody coup, and the Cardinals seem higher on Rosenthal than the league at large, so this also reads unlikely to me. But questions about his eventual MLB role could open up an exploitable difference in valuation if, say, somebody sees him more clearly as a rotation anchor than the Cardinals do.

Michael Wacha is not even eligible to be traded, yet—he signed less than a year ago, on June 14, and would probably make a pretty obvious PTBNL at this point.

Carlos Martinez: I'm not sure where Carlos Martinez is, and the Cardinals have other pitching prospects making a ton of news, which should be cause for a little availability-heuristic-related alarm if you find yourself thinking he's much more tradeable than his trade-centerpiece counterparts.

He had a great half-season in AA last year, and is two months younger than Michael Wacha, which is why you should be as nervous about trading him as anybody else. Of course, it's also why he'd be (at least) as valuable in these trades as Rosenthal or Wacha, though some teams might have lingering doubts about his endurance.

Lance Lynn: Say, wouldn't it be great if one of those four guys could strike out a batter an inning over a full season in the majors while safely exiting the young-pitcher injury nexus?

Matt Adams: The Cardinals are doing everything they can to suggest Adams has a role on the 25-man roster, but it's possible to agree with the idea that he doesn't have to be traded while still thinking he's pretty tradeable. Adams has too much to make up—defense, baserunning, on-base percentage—to look like a star, but Adam LaRoche is still out there costing a contender $12 million a year.

Tyrell Jenkins: The system's designated lottery ticket couldn't stay healthy in 2012, but he was also pitching in a full-season league with a FIP of 3.47 as a supposedly ultra-raw 19-year-old. If his arm is intact, he could turn things around quickly.

Kolten Wong: Trading a steady-looking second baseman for a steady-looking shortstop seems ridiculous, but I'll drop him in here in case Matt Carpenter begins April with a series of Rey Ordoñez-style barrel-roll double-plays or Starlin Rodriguez stops striking out.

That's a lot of strikeouts, but doubling up the league ISO while you're a year-and-a-half younger than league average is enough to make you a very interesting prospect. Plus he can play the outfield (kind of), though if he's assigned to the FSL his real numbers might be dragged down by a second consecutive pitcher-friendly league.

Maikel Cleto: I don't want to talk about it.

Starlin Rodriguez: Rodriguez strikes out too much—leading to some very high BAbips—but he's a second baseman who hit .300/.373/.442 in the FSL, which makes him Very Interesting by default.

Mike O'Neill: O'Neill, 24, basically had an dead-ball-era George Sisler season in the FSL, striking out less than five percent of the time and hitting .359/.458/.440. That's really neat.

Colin Walsh: Colin Walsh, kind-of-a-kind-of-a-middle-infielder, hit .314/.419/.530 in the Midwest League last year, after not hitting in two previous tries at the league.