This is probably not the guy I would have released to clear a path for Matt Adams, but whatever works.

The St. Louis Cardinals released Ronny Cedeno on Tuesday, fulfilling rumors that began almost from the moment they signed him as competition for Pete Kozma (and, once upon a time, Rafael Furcal) and putting a bounce in the step of rumors suggesting Matt Adams will make the Opening Day roster as one of two slow-moving backup first basemen. (Here's Derrick Goold tweeting the news.) 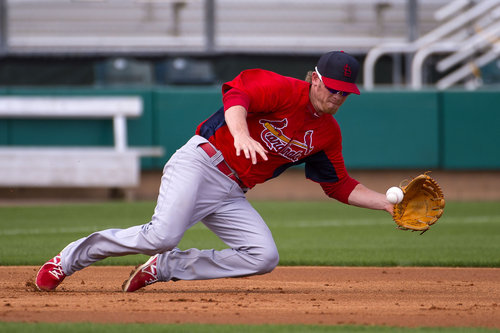 What we've learned about the Cardinals' shortstops since spring began.

The Cardinals seemed less than keen on Ronny Cedeno from the beginning—click the sidebar link for more details, including a history of Jenifer Langosch's ambivalence—and his spring training did little to improve his standing on the team. Barring any middle-infield surprises, this move means Pete Kozma will be starting at shortstop and Daniel Descalso will serve as his primary—well, basically as his only backup.

Cedeno is coming off a big year in a reserve role with the New York Mets, but his perennially inconsistent defense meant he wasn't able to parlay that into a role on the Cardinals, despite Furcal's injury and Kozma's long years of minor league mediocrity.

Should Kozma crater, the Cardinals' options at the position are now Descalso, AAA Memphis starter Greg Garcia, and deposed defensive wunderkind Ryan Jackson, who'll man the utility role behind Garcia and Kolten Wong. Cedeno could have a hard time proving his worth for another major league club now that he's proven unable to crack that particular rotation.