The Jed Lowrie trade and the St. Louis Cardinals' place outside the competitive cycle

The St. Louis Cardinals could probably use an infielder like Jed Lowrie, but their recent success has a lot to do with the way they've weaned themselves off his type.

Share All sharing options for: The Jed Lowrie trade and the St. Louis Cardinals' place outside the competitive cycle

The Jed Lowrie trade—the Houston Astros sent their injury-prone shortstop the Oakland Athletics for three prospects—is so interesting mostly because it's a perfect "cycle" trade. The Astros, under Jeff Luhnow, are still in the process of blowing themselves up until they find a mix of prospects that will allow them to move from doormat to almost-competitor; the Athletics, under Billy Beane, finished doing that last year and are now looking to compete consistently over the next few seasons. 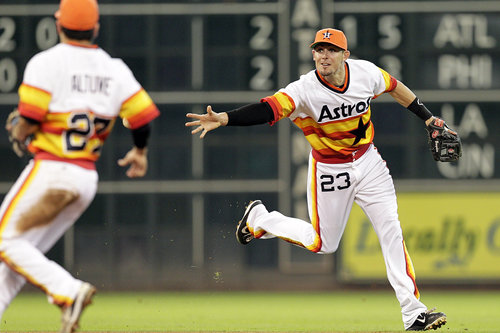 "Which prospects did the A's trade, and how does this affect Tyler Greene?" I'm glad you asked.

It fits the ideas we've developed about baseball in a way that's almost too perfect—it's like the kind of videogame teams internet baseball fans tend to create in which nearly every player is either pre-arb or part of a byzantine platoon system. Luhnow's Astros are the platonic form of a team that's rebuilding on the cheap, trading shrewdly, and wasting zero resources; Beane's Athletics are that same team a few years down the line. Before and after, exactly like we imagined it the first time we read a Baseball Prospectus or a Hardball Times essay or a Rob Neyer column.

It's just how fitting they are, I think, that's made them so frustrating for St. Louis Cardinals fans to watch.

ESPN had a nice story Monday about how the Cardinals use sabermetrics. They do, first of all, more and more effectively than we do here, but unless you're a professional sportswriter who derives a weird pleasure from subtweeting blogs and airport authorities that's not news.

What made the story so interesting is that the writer, Anna McDonald, took that as a given and moved on from it, giving us a rare look at how publicly available metrics and concepts relate to the private, trade-secret work that guides the way the Cardinals really operate.

(I think this is a really important concept—in the last ten years there's been a fundamental shift in what sabermetric writing on the internet means. When I started blogging, the focus of baseball blogging was that a 16-year-old C-student like me could learn in a couple of weeks more than a lot of baseball executives appeared to know about how runs were actually scored; we wrote about how teams should operate, based on publicly available metrics.

Now the good teams know more than we do, and 25-year-old me would have to spend three months learning all the math I've forgotten to even try to catch up. We write about how we think teams are operating, based on research and concepts that might be close enough to approximate their thought processes. I think a lot of contemporary antipathy toward bloggers is based on the idea that we aren't aware of that shift in our position.)

John Mozeliak is predictably cagey about the actual inputs the Cardinals use, but he's more than willing to describe them in abstract: Recognizably WAR-like measurements of a player's value as "a simple place to grab information and get a feel for it," projections at all levels of organized baseball, a well-organized (and number-aware) scouting department. Unfortunately, that doesn't tell us much—it would be difficult to find an executive who didn't talk that way in 2013, given enough prompting and page-space.

But the most interesting part of the post—the most relevant to the Jed Lowrie trade—comes at the end. McDonald asks Mozeliak where the Cardinals will be able to find a competitive advantage in a future where every team's analytic process looks the same from far-enough away.

"When you said, 'How do you have a competitive advantage?' There may come a time when there is no place to push stats, like some of the defensive world is still improving, right? Nobody feels like they've got that nailed, but with the creation of f/x data there's a chance it is going to get pretty good quickly. [FIELDf/x data tracks player positions, providing feedback for reaction times and if a play in the field was even possible]. So from an organizational standpoint, we are always looking at ways that might have nothing to do with stats, but give us that advantage."

Here's my own probably spurious explication: The Cardinals' advantage, in 2013, is that they haven't operated in a traditional Astros-to-Athletics cycle for years. Their process has been tuned—with the veterans and the 25-year-old rookies and everything else—to keep them from needing to trade for Jed Lowrie, for the most part.

The St. Louis Cardinals are neither the Astros nor the Athletics, and they haven't been since Mozeliak took over. When they had the chance to solidify the structure of their team, in one way or the other, by signing Albert Pujols, they decided against it.

Instead they've operated like a strange mix of both teams. Like the Astros, they rarely venture outside the bargain bin if they have any internal options at a given position; like this year's Athletics, the moves they do make are always pointed toward competing in the near term.

This year that's been intermittently frustrating; a player like Beane acquisitions Hiroyuki Nakajima or Jed Lowrie seems, from our position, to be a major upgrade over the Cardinals' internal options.

It's also an oversimplification to give this process we've extrapolated from one paragraph too much credit for the Cardinals' success; just as the Moneyball Athletics' success had as much to do with three excellent starting pitchers as it did Beane's analytics and penny-pinching, the Mozeliak Cardinals benefited until last year from the sub-market-value services of one of the best baseball players ever.

But as much as I think these Cardinals could use Jed Lowrie, I think the shape of their success has to do with the way they've decided they couldn't.