Can Kolten Wong become the St. Louis Cardinals' second baseman of the present?

Share All sharing options for: Can Kolten Wong become the St. Louis Cardinals' second baseman of the present?

In his first full professional season. pushed all the way up to the St. Louis Cardinals' AA affiliate, Kolten Wong got off to such a good start that it took a while for everyone to realize 2012 was a minor disappointment. For well-rounded hitters—that's code for "hitters who don't have any impressive counting stats for us to follow"—that's how hot starts work. Put together a solid batting average with great peripherals for the first couple of months and nobody's going to notice when you finish with a solid batting average and mediocre peripherals.

For Wong, the Cardinals' second baseman of the near future, that trick couldn't have worked any better:

By the time his ugly July and low-OBP August worked their way into his numbers we had already internalized the idea that Wong was having an impressive high-minors debut; that .310/.379/.445 he carried into July 1 is an almost perfect representation of the ideal Kolten Wong. 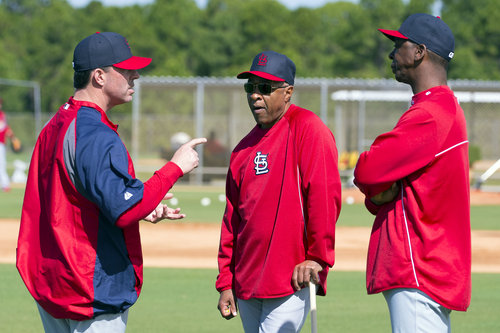 Need to waste even more time this afternoon? This list can help.

But by the end of the year his numbers were an almost perfect representation of the acceptable Kolten Wong—and in AA Springfield, where Daniel Descalso left us permanently gun-shy with a .323/.396/.531 half-season back in 2009.

The offseason was enough time for most of us to realize that Kolten Wong hadn't had the season we thought he was having; even the Cardinals' total lack of stability at the position hasn't been enough to restart talk about him skipping Memphis.

Last June it seemed like Wong was prepared to bring the Cardinals' second base carousel to a stop a year ahead of schedule. Today he is in major league camp, at least for the moment. But winning the job in March—or even in April or May—is no longer something he can do himself; he'll need help from others.

Most obviously, Matt Carpenter can't win the job. Carpenter is projected to hit like acceptable-Kolten-Wong right now—.257/.330/.388, per ZiPS—and his continued relevance at the position is the one thing guaranteed to keep Wong off the roster.

The problem isn't that Carpenter's as good as Wong, because—assuming Carpenter is somewhere in the Skip Schumaker range on defense—he probably isn't. It's that Carpenter fills the same role on the 2013 Cardinals that Kolten Wong would. He's the upside play, the chance to get above-average production out of a position they've devoted almost no resources to. And he provides that upside without the risk of rushing the Cardinals' top second-base prospect.

David Freese (and Ty Wigginton, for some reason)

Wong isn't just blocked by Carpenter at the Cards' second-base ceiling; he's blocked by Daniel Descalso at the floor. That's the thing about Daniel Descalso: As underwhelming he is as a starter, he gives the Cardinals a plausibly above-replacement-level backstop at the position.

Short of hitting .323/.396/.531 again, though, Descalso isn't going to have a lot to do with the way the Cardinals bring up a top prospect. As a wise utility infielder once said, he is what he is. Kolten Wong's debut in 2013 will have a lot more to do with Rafael Furcal and David Freese, and how strained the Cardinals find their limited infield resources.

The Cardinals thought enough of Ty Wigginton, for some reason, to sign him to a two-year contract. I can't understand that, but I also can't deny it. At the same time, I remain optimistic enough to believe that if Freese has to miss more than a few games, the Cardinals will not consider Wigginton their starting third baseman. Which leaves Matt Carpenter, unless the Cardinals want to see if Jermaine Curtis can replicate his bizarre (.259/.347/.317) ZiPS projection.

A hole at shortstop is less likely to spring Kolten Wong from Memphis—right now I count three Memphis-bound shortstops, which is going to leave somebody hurting for playing time—but it's more likely to happen. The strange thing about the players keeping Kolten Wong from being the second baseman of the present is that most of them aren't actually second basemen; before long, most of them could end up otherwise occupied.