The St. Louis Cardinals' Ballpark Village is nearly under construction. Do you care?

Will Ballpark Village make your Busch Stadium experience any better?

Share All sharing options for: The St. Louis Cardinals' Ballpark Village is nearly under construction. Do you care?

Barring last-ditch efforts by conservationists to save Lake DeWitt, the St. Louis Cardinals' Ballpark Village will stop being an idea we joke about and start being a thing we joke about over the course of the next year. In a completely abstract way, I think that's just fine. It'll be nice having something else to walk around on the way from my car to the ballpark, and it looks good in the ritzy-suburban-Chipotle sense to which I've become accustomed.

But as a Cardinals fan I'm not sure this will change anything for me at all.

I don't doubt that that has at least something to do with the fact that I never have and probably never will live in St. Louis. When I get into town for a Cardinals game I've just driven an hour-and-a-half, and when it's over I don't have much to think about except the next hour-and-a-half of driving. Which is why I'm interested in knowing what other people—more conventional Cardinals fans, I guess—think about it. 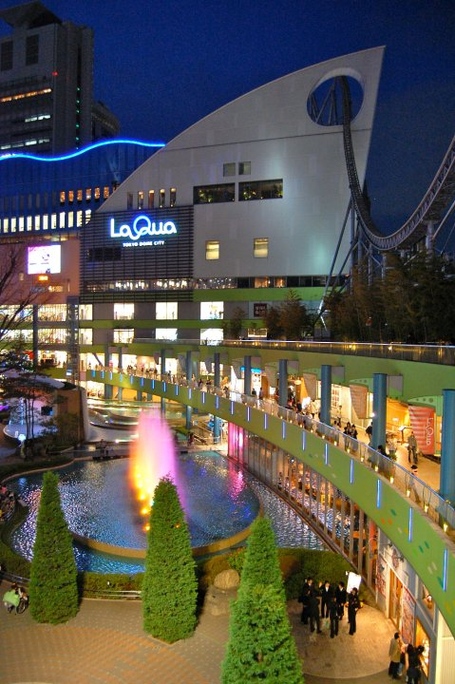 If girlfriendup's keitai's shutter were faster, I'd be in this photo.

For me, at least, Ballpark Village has always had a bit of fantasy about it, even at full-size. It's that fleeting solipsistic impression you get, as a teacher, when you believe your entire class's academic lives revolve around the 40 minutes three times a week they spend with you.

I love going to Cardinals games, and the Cardinals museum is nice every so often. But it seems like an overreach to assume people want to fill a few hours on both sides with Cardinals stuff, even if most of it will be ostensibly non-baseball.

Much as I love parking and softball, something has to go there. But if there's one thing St. Louis's downtown has developed pretty organically, it's things that go well with baseball. (And is there anything more generically urban-renewal than a place for live performances?)

But it could just be that I'm jealous of Tokyo Dome City, in which I once rode an enormous roller coaster called the Thunder Dolphin through the top of a shopping mall. Your move, Live at Ballpark Village Exclamation Point.