World Series 2013: The St. Louis Cardinals are one-dimensional where it counts

Share All sharing options for: World Series 2013: The St. Louis Cardinals are one-dimensional where it counts

The best Cardinals are conspicuously well-rounded players—the kind of guys who can really fill up a baseball card, if your baseball cards have offensive WAR and defensive WAR on them for some reason. Yadier Molina is the best defensive catcher in baseball and one of the best offensive catchers in baseball; Matt Carpenter is a singles and doubles hitter who also drew 70 walks and played a solid second base; Matt Holliday and Carlos Beltran have slowed down but were notable, in their prime, for looking less like statues than most power-hitting corner outfielders.

It's true on the pitching staff, too—Adam Wainwright, Shelby Miller, Michael Wacha, and Trevor Rosenthal all excelled by combining above-average strikeout rates with the kind of command we associate with a prototypical Cardinals-pitcher season.

The Cardinals' success was built on these performances, and they're characteristic of how they look at a team level—this is a team that led the National League in runs scored but also put up an ERA+ of 107. But past those all-stars, the Cardinals' broad-based approach was built in a way that doesn't necessarily track with peoples' Good Old-Fashioned National League Baseball expectations: It's anchored by a steady stream of one-dimensional players.

Allen Craig should be ready for the World Series 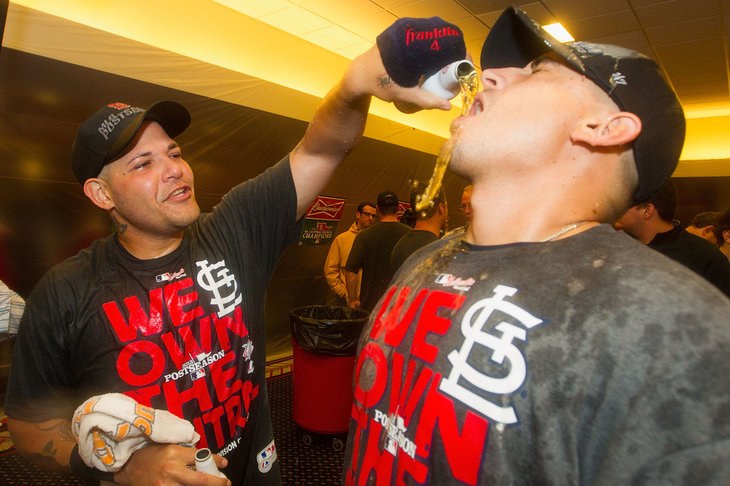 But the role he'll play is still a little unclear.

Matt Adams, who lifted the Cardinals' offense in the NLDS and makes the possibility of Allen Craig being relegated to DH in the World Series a little more palatable now, is maybe the best example: Through 119 games this season, he's got 18 home runs and just 26 walks.

He looks like he does one thing well, and he does not disappoint—and the Cardinals' ability to spot that major league power from all the way out in Slippery Rock University has allowed their offense to weather the loss of not only Allen Craig but also Oscar Taveras, the next multi-talented box-score-filler on their agenda.

Then there is—or was, at least—Edward Mujica, author of (three-quarters of) one of the stranger shutdown-reliever seasons in recent memory and Seth Maness, who is capable of two things, I guess, if Don't Walk Anybody and Lots Of That Contact Comes With A Runner on First Base are two separate skills. Even Pete Kozma was busy putting together the most polarized replacement-level season he could gin up.

It's been a bad year for the Cardinals' generalists, who were so crucial to their World Series run in 2011. Jon Jay and David Freese have both struggled on defense and offense, struggling to get both sides of their game above-average at the same time; Daniel Descalso, parachuted in to make shortstop look a little less like a perverse experiment, immediately stopped hitting and played defense like Kozma's mirror image; Jaime Garcia couldn't stay healthy and Mitchell Boggs and Marc Rzepczynski wiped out before midseason.

We value versatility in baseball players, and we should—all of the once-in-a-generation players and most of the all-stars reach those heights because they're capable of so many different things. (What's the difference between the Miguel Cabrera of 2013 and the Albert Pujols of 2006? Watch them play defense, watch them run the bases.)

But on a team level, doing everything well doesn't look like that. It looks like Matt Adams following Matt Carpenter in the batting order, and Pete Kozma—god help us—taking back some of the outs he's just given up.