How high will the St. Louis Cardinals' payroll go in 2013 and beyond?

Bill DeWitt plans on giving the St. Louis Cardinals' payroll a boost in the coming years, but how high will it go?

Share All sharing options for: How high will the St. Louis Cardinals' payroll go in 2013 and beyond?

Stockholders in America's remaining supply of the word "DeWallet" celebrated earlier this week after receiving word that Bill DeWitt seemed resigned to the idea that the St. Louis Cardinals will have to increase their payroll in coming years. Assuming he wasn't in the middle of a lecture about inflation, that means John Mozeliak will have more to spend than just the money freed up from the Carlos Beltran and Rafael Furcal contracts after the 2013 season.

Goold points out some other imminent payroll crunches, Adam Wainwright's contract extension and the cycling of all the Cardinals' low-cost heroes through arbitration among them. Before we move on, though, it's worth looking at where the payroll's going already. Here's the Cardinals' Opening Day payroll against the median payroll since 2005, the first year they topped $90 million (via this collection of AP payroll figures.) 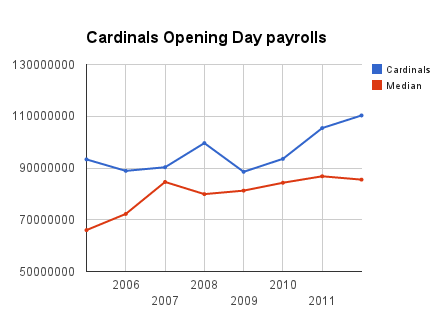 During that time the Cardinals have ranked as high as sixth (in 2005) and as low as 13th (in 2009 and 2010.) Mostly they've hung around the Top 10. But their climb over the last two years, as big as it looks against the median payroll, only took them from 13th to 9th in 2012. While the median payroll remains flat, the price of having, say, a Top 5 payroll—which the Cardinals just missed in 2005—has gone way up. 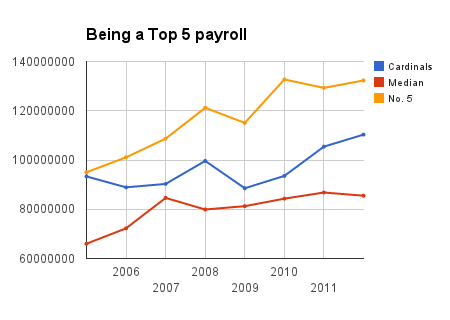 To Bill DeWitt's credit, the Cardinals' payroll has reflected the recent inflation at baseball's top tier instead of settling into the mid-80s with the rest of baseball. Now that the Los Angeles Dodgers have convincingly topped the Yankees' payroll ceiling, which has hovered around $205 million since 2005, staying at that pace probably will require the Cardinals to open the coffers even wider.

Which is not to say that the results will look much like the Dodgers' debauched offseason. Adam Wainwright will cost $12 million in 2013; it's easy to see that jumping past $20 million in 2014, if he's extended. A young, homegrown team is extremely cost-effective for a while, but eventually you have to pay or replace all of them at once.