A look at the Cardinals options to sign a free agent left handed reliever or fill the role internally.

The general consensus, devoid of context or anything more than a shallow evaluation [1], seems to be that the Cardinals are in for a boring winter. They'll tinker with their middle infield options. They will enter spring training with a nominal[2] competition for the 5th starter role assuming Jaime Garcia doesn't go under the knife again. Sans some offseason Pete Kozma magic, this is going to be a long offseason.

As a master of minutiae, a sultan of statistical sundries, a titan of trifles -- and someone who clearly has their thesaurus out -- let me bore you with one of the offseason tinkerings: left handed relief.

Marc Rzepczynski had a perplexing year for the Cardinals. I term it perplexing rather than simply bad, because it was so different from the performance he put on in his half season with the club during 2011. Then Rzepczynski struck out 11+ batter per 9 innings but he also had control issues walking over 4 per 9. His BABIP was through the roof. Subjectively though, and this is almost certainly related to the postseason, he performed well. Portions of the VEB hive mind questioned whether he could return to his days of starting as he had in the AL East.

(That portion of the hive mind is scheduled to be drawn and quartered at noon CST today. Don't be wrong in your predictions VEB. Also, don't forget to set your clocks back.)

Alas, the good Rzepczynski was not to be. His strikeout rate was nearly halved in 2012 (that's bad) but his walk rate was reduced by a full batter (that's good) but he was prone to home runs (that's bad) despite seeing his BABIP regress significantly (that's good). The end result was a reliever who looked nothing like the prior half season. A reliever you might take a chance on acquiring in the offseason if you (a) hadn't watched him all season long and (b) thought that home run rate would normalize.

Did you know that Brian Fuentes pitched 5 complete innings for the Cardinals in 2012? True story.

Did you know that J.C. Romero pitched 8 complete innings for the Cardinals in 2012? True story.

Did you know that Arthur Rhodes pitched 8.2 innings for the Cardinals in 2012? No? That one is false. He actually pitched those innings in 2011 before pitching another handful of instances in the postseason for the club.

The point is that the Cardinals have been willing to use anything that was left handed and breathing to try and capitalize on the platoon split. Relievers who, based on almost any measure, appear washed up and can only make it to the mound with a walker were all to often given the ball in the last two seasons. In many ways, the last good left handed reliever the Cardinals had for a full season dates back to 2009 when a 36 year old Trever Miller pitched 43 innings for the club. He would turn into a pumpkin the following year.

The Cardinals also tried a pair of rookies in 2012 while attempting to find gold in a vein of pyrite. Barret Browning twirled a 87-mph average fastball to 19.1 innings. Sam Freeman heaved a 93.4-mph average fastball for 20 innings. Browning couldn't strike anyone out and Freeman couldn't keep the ball in the zone. While Freeman has been bandied about as an option for next year's pen, that speaks more to the dearth of left handed relievers in the Cardinals organization than it does to Freeman actually being good. Or it may speak to velocity whores. You've got one question to ask yourself: Are you a velocity whore? Well, are you, punk?[3]

As the front office prepares for the winter, and reads VEB to further elucidate their decisions while expanding their vocabulary, let's look at a few of the left handed relievers available this winter who don't make me want to vomit. For baseline reference, the Cardinals, including starters, faced 2710 left handed hitters in 2012. They held them to a .319 wOBA.

He's been paid handsomely by the San Francisco Giants over the last four years. Since signing with them for the 2009 season, Affeldt has made $17.5M plus two World Series wins. Born in June, Affeldt will enter next season at age 33. Affeldt has logged 237 innings with the Giants. During that time frame, he's allowed 202 hits, 210 strikeouts and 102 walks. One of the odd things about Affeldt is that he's not a true LOOGy but, rather, more of a good reliever in general. Here are his wOBA splits for the last 4 seasons.

When you look at his totals for the last four seasons, less than a hit an inning and a better than 2:1 K:BB rate, things look pretty good. The yearly splits just show how volatile relievers are. His velocity was all over the place in 2012 but he's been a pretty consistent low-to-mid 90s guy. Via fangraphs: 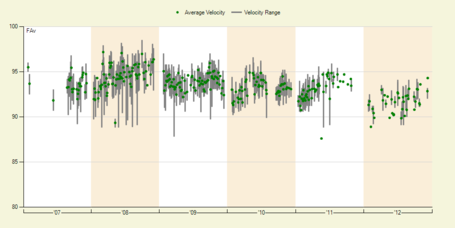 As I'm wary of any reliever, and Affeldt hasn't shown any particular consistency beyond the last two seasons, I'd probably be hesitant to offer anything more than a 2 year, $8 M contract.

A member of the Nationals for the last four seasons, Burnett has spliced a pair of very good seasons with a very bad season. Burnett will enter 2013 at age 30 with an August, though not particularly august, birthday. He's also undergoing elbow surgery to remove a bone spur from his pitching arm. (One of you is now apoplectic after seeing the picture in that article. Anecdotal apoplexy, of course.) To the rate stats:

For his career, which includes some agonizing seasons with the Pirates[4], Burnett is a hair below a 2:1 K:BB ratio but the more recent efforts with the Nationals show a pitcher who has the potential to be, albeit inconsistently, far better than that. Where Affeldt is reliant on a curveball for his secondary offering -- which probably explains his lack of a strong platoon split -- Burnett is a fastball-slider pitcher and has, over his career, a .050 point spread in his wOBAs between lefties and righties.

With a caveat to his surgery results, I could be persuaded to two years plus an option.[5] $8M plus a $5M option with a $500k buyout. Get it done, Mo.

A career 10+ K/9 IP strike out rate over nearly 400 innings should make you a pretty valuable commodity. Mike Gonzalez, late of the Nationals, has an extensive medical record to dampen enthusiasm. Command has never been Gonzalez's calling card but he's always punched out enough guys to make it largely irrelevant. Think of him as 2011 Cardinals' Marc Rzepczynski but doing that over 8 years.

Gonzalez is another fastball-slider pitcher with better velocity than Burnett but not quite up to Affeldt's. What's notable about Gonzalez is how much he relies on his slider. He throws his secondary pitch nearly a third of the time. Far more often than most relievers. He's dabbled with a changeup over the seasons but always at the expense of his fastball, never the slider. I'm not a huge proponent of pitch specific linear weights, his fastball has been worth +6.8 runs over his career while his slider has been worth an astounding +46.2 runs. The slider is clearly Gonzalez's out pitch.

Given the medical history, I'd want to stick to a one year deal but maybe you splurge a little and spend up to $6M.

The Cardinals, as has been their wont in the past, could take a waiver on a second tier guy like Tim Byrdak or Randy Choate -- in as much as their are "tiers" among LOOGys. The other option would be a bit of creativity with their minor league system, which has failed badly at producing any left handers beyond Jaime Garcia. The upper reaches of the minors contain a handful of left-handed starters with mixed degrees of name recognition[6]: Nick Additon, John Gast & Tyler Lyons.

While John Gast has the fiercest mustache of the three, Tyler Lyons, who quietly ascended to AAA just two seasons after being drafted, has the best statistical profile of the pack. Lyons split time between Memphis and Springfield last season maintaining nearly a strikeout an inning and a 4:1 K:BB rate across two levels. Lyons also has the best stuff of the three with Gast and Additon both working with 90mph or less on their fastballs.

With Sam Freeman of questionable skill and questionable health, the Cardinals would be wise to look at their left handed starters within the farm system if they are forced to go cheap. There are a handful of decent left handed relievers on the market but all it takes is one drunken Ned Colletti phone call -- scotch with no rocks -- for that player to sign for far more dollars or years than warranted.

[2] I wanted to use the word titular here because, well ... hehe. Doesn't really work though.

[3] I'm sober this morning which surprises even me as I blend together an awful mixture of pop culture references, snark and vocabulary. No apologies. Never surrender.

[5] I'm starting to realize that I have a threshold for relievers and all of these guys might be good enough to reach it but never surpass it.

[6] I struggle to filter the political jargon out of my vocabulary this time of year.