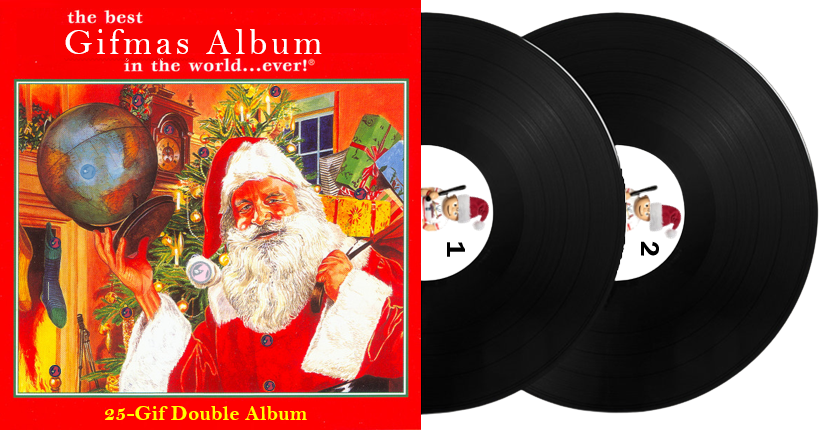 The Season of Gifing
(Can you find all 12 Birdos on the album cover?)

I hope you all receive sufficient downtime to reflect on another year; stare out the window a-waitin' on spring; and of course, open some gifs! (Remember to occasionally play with your old gifs from Volume I and Volume II.)

In the true spirit of Gifmas excess, Volume III is a double album!

Last Thanksgifing, Volume II's list stretched the capacity of the internet, especially when viewed on mobile devices. I'm hoping to eliminate that issue with Volume III by presenting two shorter lists in separate Fanposts: Record 1 (13 gifs) and Record 2 (12 gifs).
25 for the 25th!

Love, despise, or tolerate him, Jimmy Ballgame's famous mantra rings true in baseball and in many aspects of life, including gif-making.

Throughout 2019, I did not heed his advice. I was feeling my oats. I started pushing gif boundaries, making them longer. Problem is, SBN can't handle an infinite number of bytes. Instead of shortening some gifs, I often reduced their image quality to meet file size limits. That sometimes was fine, other times not so much. Gif and learn!

So full disclosure. Some people trim trees this time of year. I trimmed a little content from a couple of the 2019 gifs. Again, hopefully to alleviate loading issues. You won't know what you're missing tho!

1. Mo failing to land Bryce Harper left me with a Hangover and a gif that did not age well

2. A losing streak drove us nuts, but we were resilient

3. Sometimes Doc Rocks was too forthcoming

4. VEB was unsure if Tommy was a doubles Prodigy Firestarter, but I'm sure this was his first appearance in a jdog gif, and he's standing still; sheesh

5. VEB likes it some Baby Giraffe

7. Like, what a bummer of a playoff game, man

8. The playoff picture was an Enigma that went down to the wire

10. Back when Jedi Yodi knew how to handle the bat

11. The Club was in a real Fight that playoff season

13. Apparently, a VEB writer offered Dakota as evidence of a Cards pitcher factory