The sabermetric baseball writing I grew up reading was concerned with two things that—as a 16-year-old—I found just-about-equally exhilarating. First, and most importantly, it was a quest for knowledge—how were baseball games actually won and lost? How could we use the reams of data emitted by the sport to determine who’d actually influenced it the most? Of the 140 years of knowledge accumulated by generations of revered baseball experts, what was right and what was wrong?

Second, and less importantly—though, again, way less less-exhilarating than it was less-important—it was a quest for understanding: What kind of brain injury was holding these idiot sportswriters and announcers back from realizing their obvious mistakes? Was it malice or simple ignorance that kept them from sinking Joe Morgan in the Ohio River during Sunday Night Baseball? When I was finished evangelizing all the dumbasses in my section about OPS, would my statue be the same size as Ray Lankford’s, or a little smaller, to recognize that I never could have run if he hadn’t first walked at an above-average rate?

Over time it became clear that those early Baseball Prospectuses had made obvious mistakes, too, and that poptimists on Twitter would get mad at you about your snide tone, so baseball writing now typically works much harder than it did then to identify the real patterns in non-analytic thinking it disagrees with. The worst baseball writing ca 2003 was engaged in mind-reading; today good baseball writing would try to use Joe Morgan’s behavior to reconstruct how he actually thought, if it came to that. 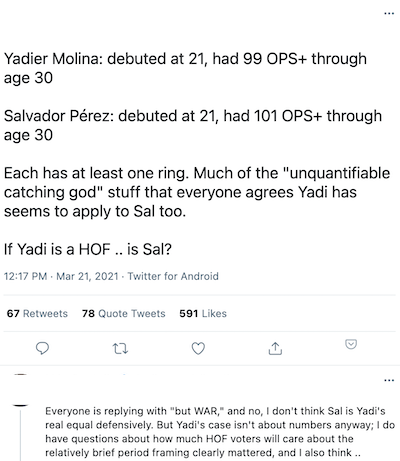 Today’s Cardinals-adjacent Twitter hot take doesn’t involve mind-reading, but it reminded me of the mind-reading era because I think it only sounds true if you don’t think carefully about how a Yadier Molina voter’s brain is working. [Fired Editor's Note: I’m extremely out of practice both as a baseball writer and a baseball reader, so I have blacked out the name in these screencaps. SB Nation couldn’t, and certainly wouldn’t, pay me enough to actually get into it with anybody, and like him I’m mostly just thinking out loud rather than responding to anyone in particular. My suggestion that Yadier Molina is a Hall of Famer is, like his position that Salvador Perez is Yadier Molina, too wrapped up in kayfabe to actually worry about.]

There’s an obvious problem here that I won’t waste time explaining to people on a Cardinals blog: Yadier Molina was much better through age 30 than Salvador Perez, and for that matter has had an unusually good and unusually long catching career since then. People have talked for years about Yadier Molina as a possible Hall of Famer, but the talk has continued all this time because his career has.

Jay Jaffe said as much, and got this response, which is what I want to focus on: 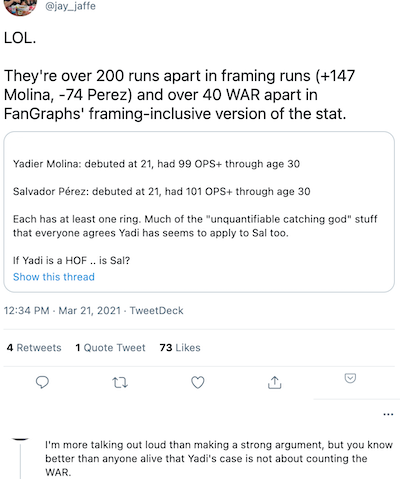 Simplifying the thing Yadier Molina and Salvador Perez have in common as "unquantifiable catching god stuff" is what holds the argument together, and it simply does not reflect the way people talk and think about Yadier Molina’s Hall of Fame case.

While it’s true that the people most enthusiastically making his case don’t make it about WAR, they do make it about statistics. Last year Ben Fredrickson cited, in this order, hits, championships (two), all-star appearances, Gold Gloves, Platinum Gloves, Silver Sluggers, putouts, pickoffs, innings caught, doubles, hits again, and RBI, and then for good measure a bunch of the same stats again only with "among active players" attached. Buster Olney, when he said what made Yadi a Hall of Famer couldn’t be defined by statistics in 2017, was not ending an argument—whether he realized it or not, he was just clearing his throat before using a bunch of different statistics to define what made Yadi a Hall of Famer.

Even Yadi himself, when asked about it last year, waited to talk about how he caught until after he was done asserting that "My numbers are obviously there."

That is: The "unquantifiable catching god stuff," writ broadly, is quantified all the time, and always has been, even before pitch-framing data actually quantified some of it. People who talk about valuable things that don’t make it into the box score, or who scoff at WAR as missing value that traditional stats don’t, are still making claims about player value, and Yadier Molina’s increasingly unlikely longevity has become a testament to that catching-god value in the eyes of the people who care about it.

If you think that talk-radio Yadier Molina fans are turning off their targeting computers entirely and just feeling that he’s a Hall of Famer, because he’s won at least one championship and he’s a defensive god, it is the case that Salvador Perez might be one too. But that weird outcome should make you wonder whether your model of talk-radio Yadier Molina fans is functional.

What I think is that it would be more accurate to say those people are using a lot of unnecessarily noisy data—how they feel, yes, but also that he has 2000 hits, and the Cardinals have won two championships and an average of 90 games over his full seasons, and that the only reason they know what a Platinum Glove is is that he kept winning them, and so on. That in a sense their case is about counting the WAR, or counting something that separates him from Salvador Perez in roughly the same way WAR does. You can get at the truth of a phenomenon as big as "Yadier Molina is better than Salvador Perez" through a bunch of very stupid tools, in the same way that you can know roughly what day and time it is by sitting at a school crosswalk and waiting for the kids to come out, even though it's much easier to just use a watch.

In olden times, there were two shortstops constantly overrated by newspaper columnists and reviled by thinking fans. There were more than two, I mean, but there were Rey Ordonez and Omar Vizquel. Both of them had the unquantifiable shortstop god stuff in spades, Ordonez perhaps even more than Vizquel. But Vizquel still had to play dramatically longer than Ordonez for his unquantifiable shortstop god stuff to become legible in Hall of Fame conversations, and people who would have god-like defense be an attribute or a character trait, rather than a skill that creates value, still rank the players who qualify for it. ("Numbers have ruined baseball. The all-time-great defensive shortstops of my lifetime... well, Ozzie Smith first, but then Vizquel," and so on.)

What I’m trying to say, I guess, is that even if you’re doing an intentionally bad job of tracking a player’s value, you’re still tracking it. And even if you insist something’s unquantifiable, you’re still trying to quantify it. If you didn’t do those things, so that Yadier Molina and Salvador Perez are both flitting visions of catching brilliance, unmoored from time, it’s true: You would end up believing some weird stuff.