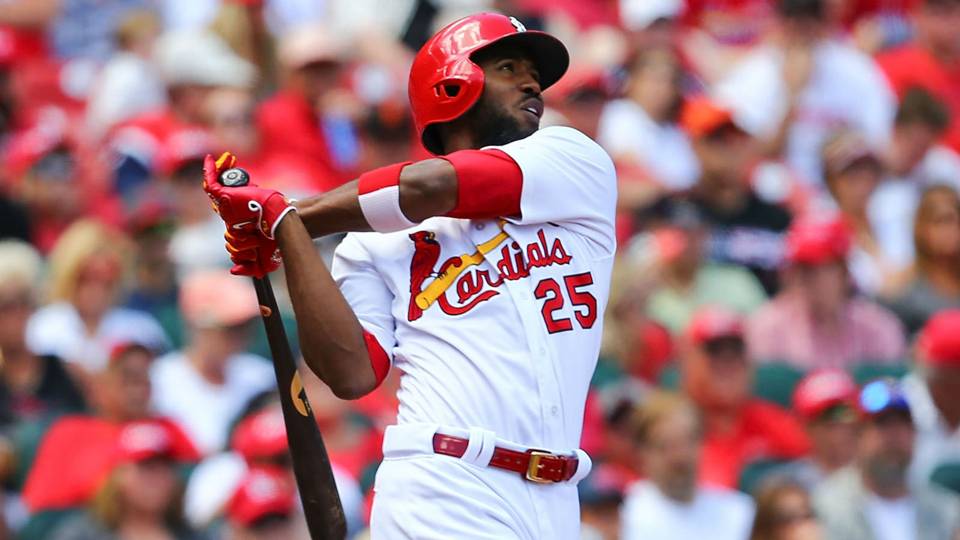 It's no secret to anyone who's watched the 2018 Cardinals play baseball: most of our best hitters have sucked. With the exception of Tommy Pham (and Paul Dejong, if you believed in that hitting profile all along), the lineup has fallen well short of its potential. Marcell Ozuna (67 wRC+) and Matt Carpenter (74 wRC+) have each disappointed thus far, which hurts all the more as we watch Francisco Pena does his best impersonation of a major league hitter (it's a terrible impersonation). But unfortunately, it's Dexter Fowler who trails the whole pack of position players at an abysmal 58 wRC+ (and I know what you're thinking--yes, that IS Dal Maxvill's career wRC+ mark). But as many here at VEB have been quick to point out, there's a lot of reason for optimism, when you dig into the numbers. So let's make like Stanley Yelnats and do the thing.

The Three True Outcome version of Dexter Fowler looks just fine in 2018. His 13.3 BB% and 20.5 K% are actually a tick better than his career marks of 12.7% and 22.0% respectively, and his 5 homeruns would put him on track for 18 bombs over the course of a 140 game season. But Dex isn't a Three True Outcome hitter, despite the obvious value of his on-base abilities. So what about when he puts the ball in play? Well, his soft contact rate is fairly inflated at 22.2% (a 10 percent increase from 2017 and 5 percent over his career mark of 17.1%), but his hard contact rate is right on the money (30.6% in 2018, 30.4% career). It's easy to imagine some of that soft contact turning into harder hit balls as the weather warms up and Dexter locks in at the plate, especially considering the somewhat arbitrary threshold that separates soft and medium contact data. He's hitting less line drives and more fly balls than in the past (17.6/44.4 in 2018 vs. 22.2/35.6 career), but his groundball rate is holding steady at 38%. Maybe we chalk those extra fly balls up to small sample size, weather, or the current hitting environment (his launch angle is 2.4% above league average, for what it's worth), but when contextualized with the rest of his hitting profile, there's really very little reason for hand-wringing.

While his ISO looks rough at .129, his BABIP of .155 is unsustainably horrendous, given his peripherals. Expect those numbers to balance each other out as the season moves forward. His average exit velocity is 4.45 under league average at 85.25, but he's not far off his career rate of 87.1 and his 2017 rate of 88.5. In other words, Dexter Fowler is still Dexter Fowler. He offers the same mix of solid hitting and plus plate discipline that he's displayed for nearly a decade now. Unfortunately, he's dug a hole for himself in terms of WAR, but Steamer and ZIPS project him for somewhere between 1.1 and 0.7 WAR despite his -0.8 WAR start to the season. The projection systems see Dexter as a 1.5/2 WAR player moving forward--not terribly sexy numbers, but the kind of solid production we expected to get out of Fowler when he signed with the Cardinals. And who knows, maybe his rough defensive numbers will flatten out a bit as he familiarizes himself with right field and his negative baserunning value will regress back to the positive rates we've seen in the past.

Is Dexter Fowler a locked-and-loaded leadoff hitter at this point in his career? Maybe not, though he's likely to look at least serviceable by the end of the season. Should we be happy to have him under contract for another three seasons? Probably not, but that was the cost of doing business back before we knew Tommy Pham was a golden god and the largely-underwhelming duo of Randall Grichuk/Stephen Piscotty patrolled the outfield. But in 2018, Dexter Fowler should be Dexter Fowler. And that's pretty good.