In January I took my first shot at baseball data analysis and modeling. By the end of the month I successfully built a program in the statistical software program R (after much frustration) to predict the probability of batter-pitcher match ups. I based my program on some previous work done in the field and utilized what is known as the Morey-Z equation, which was developed to better predict rare events such as home runs. Utilizing this equation and data sets from Fangraphs I can predict outcomes for any specific pitcher-batter match up of recent history (basically as far back as data is available). To more accurately predict outcomes I took splits of data to take into account the handedness of the pitcher and batter. Having this neat program doesn't do me or anyone else any good if I don't use it so here I am. 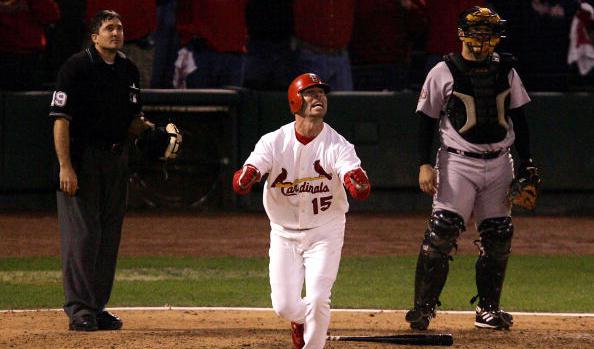 On October 20th, 2004 the St. Louis Cardinals took on the Houstin Astros in the NLCS. Down 3 games to 2 the Cardinals were in a must win situation playing in a packed out Busch Stadium II. The 2004 Cardinals were a regular season machine winning 105 games with the likes of Pujols, Edmonds, Rolen, Walker, etc. Simply put this was one of the greatest teams to wear the birds on the bat. In the bottom of the 12th with a man on first and one out the California kid, Jimmy Baseball stepped to the plate facing Dan Miceli. Miceli left an 88 MPH fastball up in the zone around the shoulders and from his back foot Jim Edmonds launched an absolute bomb to right field. Watching this as an 8 year old I believed it was going to sail out of the stadium (it did not). The probability that Edmonds would take Miceli deep was 7.94%. This is pretty high compared to a lot of other match-ups I've computed. The probability Miceli would get an out was 58.60%, which isn't real great. Sorry Miceli, but this wasn't looking good for you when the left-handed Edmonds stepped up to the plate. 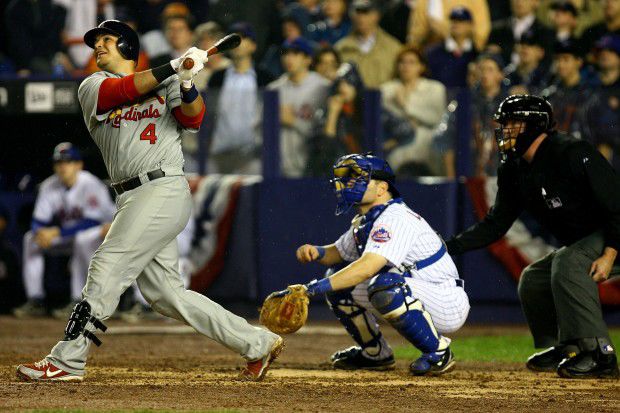 It was the top of the ninth in Game 7 of the 2006 NLCS at Shea Stadium. The Cardinals were taking on the New York Mets who finished the regular season with 97 wins compared to the Cards 83. In the top of the ninth Yadier Molina came to the plate with one out and a man on against Aaron Heilman. In 2006 Molina was hitting at the bottom of the lineup and was nowhere near the hitter he has been the last several years. Despite his unpolished skills at the dish he manged to give us a magical moment that set up yet another magical moment in Adam Wainwright's strike-out against Carlos Beltran. The probability that Yadier would park a home run in the left field bullpen against Aaron Heilman was 1.25%. The probability Molina made an out in this at-bat instead of going deep was 72.41%. Aaron Heilman if you're reading this I am sorry for showing just how improbable the worst moment of your career was.

Freese's Immortal Moments in Game 6 of the 2006 World Series 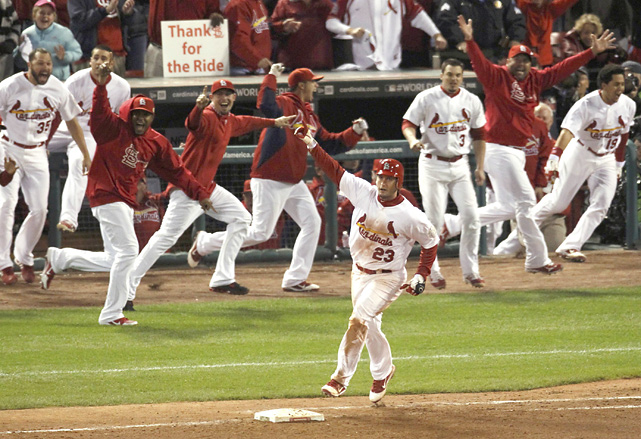 On October 27 the Cardinals hosted the Texas Rangers in a game that will be cemented as possibly the greatest post-season game ever. For this game we will look at both of David Freese's clutch hits. In the bottom of the ninth the Cardinals were down to their final strike more than once. In the last of these situations David Freese was at the plate with Albert Pujols on second and Lance Berkman on first. Neftali Feliz delivered a 98 MPH fastball on the outer half of the plate that Freese drove off of the right-field wall bringing in Pujols and Berkman. The probability that Freese would smack a triple off of Feliz was 0.13%. Yes you read that right, 0.13%. This was only part of the legend that David Freese would leave that brisk October night underneath the lights on the biggest stage in baseball.

Freese came back up to the plate in the bottom of the 11th against Mark Lowe. As I watched this unfold I couldn't help but think that it might be destiny that David Freese, the St. Louis native would deliver another clutch hit to finish the game he helped save. Sure enough on a 90 MPH 3-2 fastball Freese took Lowe deep into the grass batters eye sending the Birds to Game 7. The probability that Freese would deliver that game winning home run was 1.05%. The 2011 Cardinals were the definintion of improbable. Between the late season push to overcome a 10 1/2 game deficit to the Braves on August 24th and the Game 6 miracles by Freese the Cardinals defied the odds. After the game David Freese was asked what he was thinking as he circled the bases. Freese said that his mind was brought back to October 20th, 2004 when in another Game 6 Jim Edmonds hit a walk-off home run against the Astros.............