Earlier this week I wrote about Statcast's new sprint speed metric and how the Cardinals fared against their Major League peers. Shortly after that post went online a million sprint speed questions popped up in my mind, the first one being the subject of this article: what effect does raw speed have on a player's defensive performance?

If you didn't read the initial article, there are two things you will want to know to understand what I'm talking about:

There is a lot of data to analyze so I will do my best to present it in an orderly fashion. Got it? And away we go...
I began by looking at every player in 2015 and 2016 who logged at least 400 innings in the field and was listed on the sprint speed leaderboards. Once the data collection was complete, I had a spreadsheet containing more than 550 individual players as well as their corresponding sprint speed data and defensive metrics. I then looked at the correlation between Sprint+ and pSprint+ and these six metrics:
[Technical note: All of these stats are counting stats (i.e. strikeouts, RBIs, etc.) with the exception of RZR, which is a percentage stat. (i.e. BA, OBP, etc.) For the purpose of accurate comparisons, these counting stats were all scaled to 1000 innings.]
Because the defensive evaluation of catchers factors in different aspects of the game than other positions (pitch framing, base stealers, etc.) I omitted them from this study and separated the infielders from the outfielders.
The following table displays the r^2 values between the sprint speed and defensive metrics. An r^2 value of 0 represents a 0% correlation while 1 signifies a 100% correlation.

I would be lying if I said I wasn't a little disappointed when I looked at this table myself. None of the infielder metrics had more than a 1.8% correlation, forcing us to virtually write off that data due to its relative insignificance. The outfielder data had low correlation levels as well, but the r^2 values were still high enough to warrant a further look.

But before I get to that closer inspection, there was something odd I found among the six defensive stats. As expected, the faster fielders tended to save more runs than the slower ones, which was what made the ErrR data so perplexing. Remember, r^2 only tells us how small or large the correlation is, not what that correlation is. The correlation coefficient (denoted as r) lets us know whether being slower or faster leads to players committing fewer or more errors.

Interestingly enough, the correlation between speed and errors among middle infielders and outfielders essentially read, "the faster you are, the more errors you make". I can only theorize why this is. Are more plays scored as errors against quicker players? Do faster players have weaker and/or less accurate arms? Maybe those questions will turn themselves into an article, but that's for another day.

Back to the discussion about outfielders. I graphed each outfielder on my spreadsheet based on their sprint speed stats and UZR/1000, with the red dots representing Cardinals players. 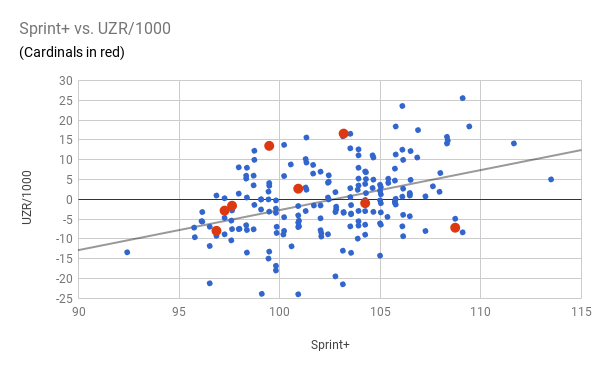 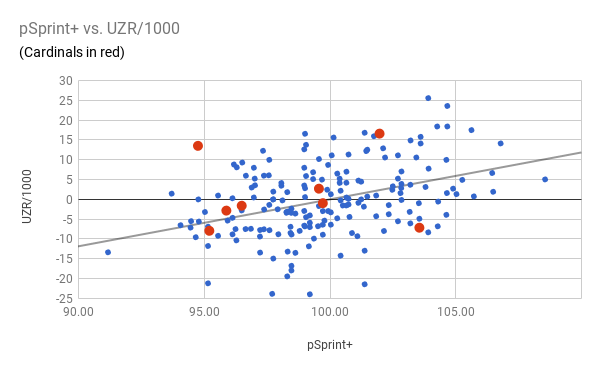 The gray trendlines show us the UZR/1000 we would expect from a player based on their speed. Any players above the lines outperformed their speed while players below did the exact opposite. There are numerous things that could contribute to whether or not a player falls above or below these lines, but I have identified the placement of the fielder and the fielder's route efficiency as two of the leading culprits.

We can calculate a player's expected numbers based on these scatter plots, which is exactly what I did with UZR, DRS, and rPM–three of the most widely used measurements of a player's defensive production. Take a look at how the Cardinals have performed relative to their expected stats.

First up we have UZR:

Here are the average numbers for the Cardinals since the Statcast era began in 2015:

Put blatantly, this is bad. The Cardinals' [outfield] defensive efficiency has decreased in each of the past three years according to all six metrics. The Cardinals aren't known for being the fleetest of foot, but 2017 marks the first season where we can definitively say the outfield defense is worse than it should be.

The good news is that–unlike speed itself–efficiency can be improved. Whether it's practice in the outfield to help shorten the path to a flyball or playing the outfielders deeper or shallower, the message is clear: change needs to be made to save more runs.