Player A's stat line resembles that of an ace. Player B's numbers have you thinking "this is an average pitcher at best". As most of you have probably reasoned, both players are the same individual: Michael Wacha.

You all know the story of Wacha. A first-round selection–the compensation pick for Albert Pujols–out of Texas A&M. A pitcher who shot his way through the minor leagues. A pitcher who made his MLB debut, a day most draftees never see, less than a year after being drafted. A pitcher whose first regular season start of 2013 resulted in seven innings of one run ball and whose last fell just an out shy of the first Cardinals no-hitter since 2001. He took the national stage by storm when–with a raucous PNC Park chanting his name–Wacha took a second straight no-hitter into the eighth inning as the Cardinals staved off elimination in the 2013 NLDS. He then out-dueled none other than Clayton Kershaw twice, including seven shutout innings in the pennant-clinching sixth game. The book on those four starts?

The electric beginning to Wacha's career carried over into 2014 before a stress fracture in his throwing shoulder forced him to miss over 11 weeks. He struggled upon returning from the DL in September and fortunately never pitched during the club's trip to the NLCS. #FireMatheny Wacha made his first All-Star team in 2015 with a 2.93 ERA and 3.13 FIP at the break. Those numbers fell off to 4.01 and 4.93 in the second half and plummeted to 7.88 and 7.84 in the season's final month. In 2016 he jumped out to a solid start before once again scuffling as the season progressed. More importantly, Wacha again landed on the disabled list with a shoulder injury that sidelined him for a month. 2016 was easily the worst year of Wacha's career but it's uncertain if he was ever truly healthy.

That takes us to the present where Wacha began 2017 strongly. While I'm not the biggest fan of game score, I think it does a decent job snapshotting a starting pitcher's performance on any given day. Wacha's average game score over his first seven starts of the season was 58. He has averaged a 36 over his last five starts.

By now I'm sure you see where I'm going with this. Michael Wacha's time in the majors has been defined by questions regarding his durability over a 162 game season. 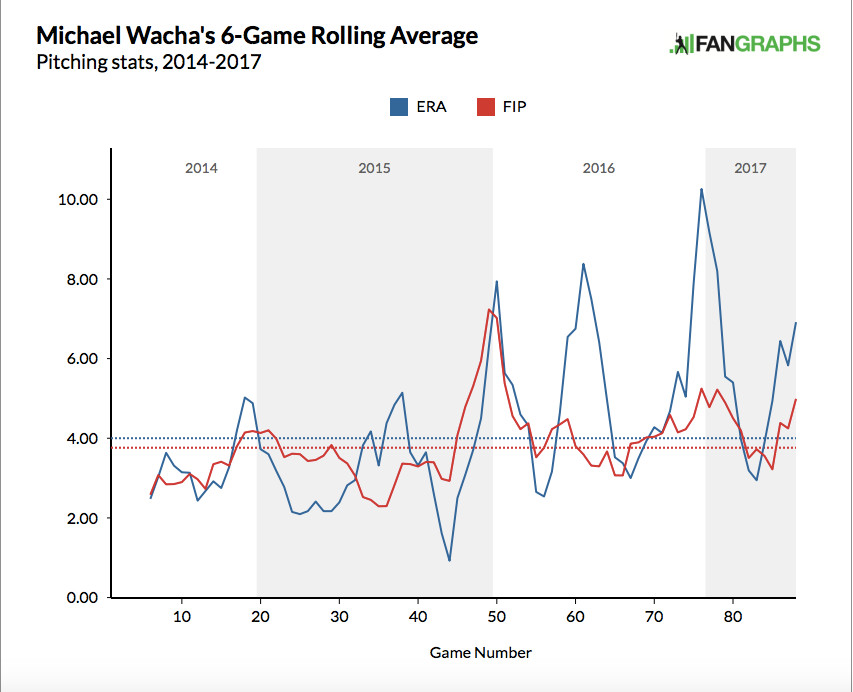 You can see that the fluctuation in Wacha's performance isn't exactly random. Both his ERA and FIP have consistently spiked later in the season as his arm begins to wear down more. At what point do the Cardinals decide to use him in a higher leverage role as opposed to a higher volume role?

Let's return to Players A and B, both being Michael Wacha as I mentioned earlier. Player A is Wacha the first time through the order; everything after the lineup turns over is Player B. We often hear about the vaunted third time through the order and how pitcher fatigue paired with the opportunity for batters to see the starter multiple times entails a recipe for disaster. But for Wacha that falloff occurs earlier in games.

The only way to avoid this decline without restructuring the entire pitching staff is to convert Wacha into a reliever. Imagine if he didn't have to worry about pacing himself for 100 pitches and could give it his all for one trip through the order. Those Player A stats that Michael Wacha the starter posted would only improve with increased velocity in shorter stints out of the bullpen.

It's also no secret that Wacha's secondary pitches–namely, his curveball and cutter–lag behind the 1-2 punch that his fourseam fastball and changeup bring. His xFIP in months when he uses his fourseamer and changeup a combined 75% or more is 3.74. That swells up to 4.27 in months Wacha doesn't use his two best pitches as often. When you only face a batter one time, you don't need to hide anything for future matchups in that same game.

Picture this scenario: the Cardinals' middle relievers are worn out and could use a day off, but that game's starter is clearly done. Two men are aboard with one out in the sixth, St. Louis leading 5-3. Mike Matheny signals to the bullpen and in comes Michael Wacha to face a string of right-handed batters. He gets out of the jam and works a scoreless seventh to bridge the game to the Cardinals' back-end relievers. The Cardinals tack on another run (for the sake of hypothetical fifty cent drinks) and win 6-3.

Now the obvious question would be: who replaces Wacha as the fifth starter? Take a look at who's waiting in the wings for St. Louis.

Call this man up @Cardinals pic.twitter.com/U5VtoggZLz

Luke Weaver left his previous start in the third inning after a trainer visited him on the mound. He was reportedly dealing with back stiffness but is scheduled to start on Friday after his spot in the rotation was skipped the last time around.

The way Wacha has been pitching of late, (Note: I write this sentence as Wacha exits Wednesday night's start after just four innings) what do the Cardinals have to lose by giving a Tyler Lyons (although I don't believe the team is convinced he is physically capable of starting yet) Marco Gonzales, John Gant, or Luke Weaver a chance? Michael Wacha can still be a valuable piece to the Cardinals pitching staff, but that value may need to start coming from the bullpen instead.