Kamehameha High School was the school of a 16th round draft pick in the 2008 MLB Draft...the Twins pick. The Cardinals had selected right-handed pitched Miguel Flores to put the Twins on the clock with the 486th overall pick. In an instant, a second baseman named Kolten Wong was off the board. Wong would decline to sign with Minnesota, instead opting to play at the University of Hawaii. All he did there was slash .378/.492/.560 in his third season.

The University of Hawaii was the school of a 1st round draft pick in the 2011 MLB Draft...the Cardinals pick. The Blue Jays had selected right-handed pitched Tyler Beede to put the Cardinals on the clock with the 22nd overall pick. In an instant, a second baseman named Kolten Wong was off the board. Wong would agree to sign with St. Louis, opting to play at Single-A Quad Cities. All he did there was slash .335/.401/.510 his first season.

Okay, you know the rest of the story. Wong worked his way up from Quad Cities to Springfield to Memphis while he also moved up the Cardinals prospect rankings. Wong was the #2 prospect in the entire system when he made his Major League debut on August 16th, 2013. That brings us to the present, where Wong, albeit early in the season, is off to the type of offensive start the Cardinals could only dream of. 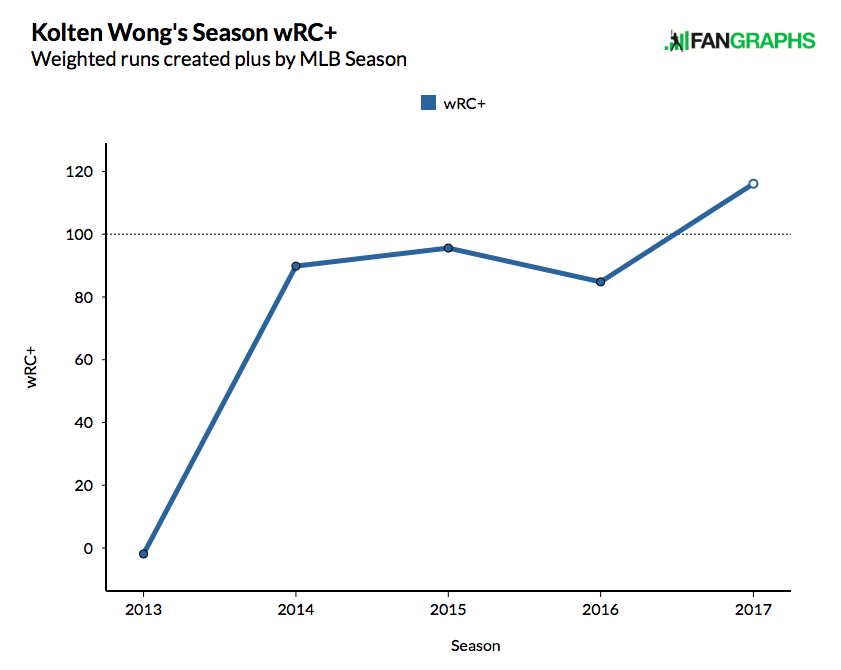 The dotted line represents a wRC+ of 100, or league average offensive production. Not only is Wong producing his first ever above-average season at the plate, he currently ranks 5th among all NL second basemen with at least 150 plate appearances in wRC+.

This isn't the first extended stretch of offensive success for Wong, however. I advise you to familiarize yourself with these four periods of time because you're about to hear me reference them a lot.

Using batted ball analytics, we'll take a look at potential alterations Wong has made with his swing and mindset at the plate.

*Warning: If you haven't already figured it out, I am one of those nerd guys.*

The first thing to ask any time a batter is on a hot streak is Is this sustainable?

Unfortunately, we don't have Statcast data for any season before 2015, but we can still draw a couple conclusions. Wong has underperformed during his slumps and overpreformed during his surges. He has always churned out below average exit velocity numbers, but a velo decrease is almost never a good thing.

That said, to look at Wong's quality of contact more comprehensively we need to divide his balls in play into Statcast's six categories. (If you want to learn more about them, VEB's Ben Markham wrote an excellent piece about Aledmys Diaz that explains the six types of contact.)

The fact that Wong's barrel rate (far and away the best classification of contact), which was already below average in the first half of 2015, has since been nearly halved since should raise red flags concerning his recent success.

Don't immediately panic, though; there is good news for us Cardinals fans. Remember, Wong's xwOBA is actually higher this season than during his hot streak at the beginning of 2015. Wong began getting under the ball more frequently following the 2015 All-Star break (more on that in a moment), but he has since adjusted to turn some of those lazy flyballs and popups into balls that get down for a hit. My theory on this has to do with the fact that pitchers began to bust Wong down-and-in in 2016. When you start trying to pull the ball more (Wong's highest pull percentage came in 2016), you are bound to get jammed, which in turn lowers your quality of contact.

Interestingly, [weak contact] grades out better than [topped and hit under], with a .460 average wOBA. The reason - I assume - is that a weakly hit ball will often involve infielders having to cover a lot of ground and make a play with little margin for error. A lazy fly ball is easier to make an out on, and a more routine grounder gets to the fielder quicker, while still needing to be perfectly placed to miss everyone.

Rob Arthur of FiveThirtyEight ran an article last year that discussed how the fastest one-third of players had the most success on groundballs. According to FanGraphs' speed score metric, Wong ranks in the top one-sixth or so this season, and as a result he has reaped the benefits of a career-high groundball percentage in 2017.

Statcast also measures launch angle, and from this table it becomes clear that Wong is making a concerted effort to keep the ball on the ground more.

For those of you who would prefer to "see" the trend I am talking about here is a column chart:

The trendlines on this chart further display Wong's recent willingness to cut back on flyballs in favor of more grounders and liners.