As some of you know, especially those who follow me on Twitter, I love to create baseball videos in my spare time. However, Major League Baseball's policy under Rob Manfred and Bud Selig puts that hobby of mine in serious jeopardy.

Allow me to lay a foundation first. I posted this video I made–containing highlights from the Cardinals' 6-0 victory over the Brewers–onto my Twitter yesterday. Realizing there were people who subscribe to my YouTube but don't have Twitter, I uploaded the same video to YouTube last night.

Missed game one of today's doubleheader? I've got you covered with this video recap: pic.twitter.com/9RhvWgQoyq

That's when I received the following email: 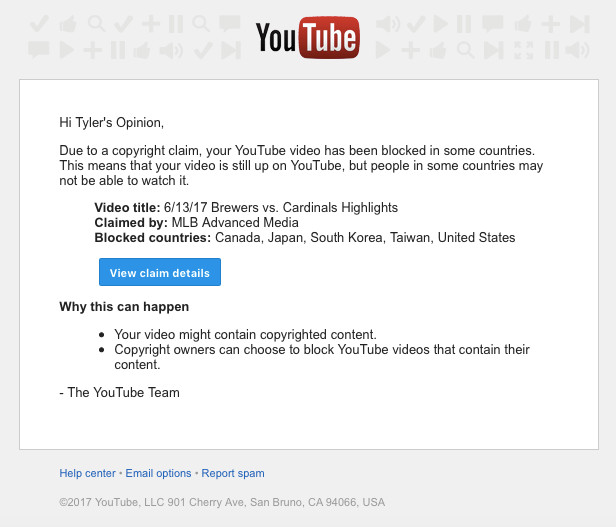 To this day I have had my YouTube videos watched in 57 countries across 5 continents, though 97.7% of my viewership comes from the five countries MLB blocked.

Maybe you don't care if people can or can't watch my videos. As much as it may sound like this article is centered around myself and my videos, I am one individual who represents a much broader issue.

I won't bore you with the stats, but it's no secret that MLB's popularity, particularly among today's youth, is on the decline. No single move will reverse this trend. Not a pitch clock, not an automatic intentional walk, not anything. But what if I told you that allowing myself and thousands of others to post fan-made videos online could be one piece to a puzzle that has baffled Commissioner Manfred?

And I do mean everywhere. Why is Major League Baseball secluding its struggling product from the fastest growing platform of communication on Earth: the Internet? Football has already leapfrogged baseball as America's top sport and the NBA is right on MLB's heels. I won't single out social media as the sole reason, but the NFL and NBA are much more supportive of content-creator fans than MLB, something that has helped to foster their growth.

If you watched even a second of the NBA Finals, chances are you noticed how the league played up the Cavaliers' and Warriors' household names, namely, LeBron James, Stephen Curry, and Kevin Durant. ESPN released its annual World Fame 100 list of the most famous athletes on the planet, and a single thought prevailed as I inspected the list: This list is packed with football and basketball stars...and there are zero baseball players.

Of note are the athletes ranked 63rd and 64th, respectively: Blake Griffin and Odell Beckham Jr. Neither are even the best player at their position, but what they have in common is the benefit of playing in the age of social media. Because the NBA and NFL allow their fans to utilize platforms like YouTube to create and share highlight videos, clips of ferocious slam dunks and ridiculous one-handed catches have gained tens of millions views, which in turn leads to increased interest and ultimately profit for both sports.

Reason #3: People enjoy these videos, and people are drawn to what they enjoy

When someone like me makes a video loaded with thrilling diving catches and walk-off homers, we are displaying Major League Baseball in the most positive light possible. Every video I uploaded is essentially a 3-4 minute advertisement saying: Look at this! Consume this product that I've just shown you! Maybe my videos alone don't reach stratospheric view counts, but video-makers collectively have a big impact on baseball.

This offseason I uploaded a Seung-Hwan Oh highlight video that was arguably a bigger success in South Korea than the United States. My highlight video got people excited to watch Major League Baseball–Cardinal baseball!–people who otherwise might not have boosted the league's ratings. The same video had a comment from a viewer who used a translator to tell me that the video made them proud to be Korean.

Between YouTube and Twitter these videos have served as a breeding ground for baseball discussion, which only helps MLB. My Jeremy Hazelbaker video featured a discussion about the Cardinals' decision to place Hazelbaker on waivers. One user, presumably from Indiana, claimed that Hazelbaker went to the same school as he did.

Can't (sic) wait for this season. I think the (sic) success of the season comes down a lot to Wong, Grichuk and Adams being able to have consistent seasons. Adams having a good season will help to free up Carpenter to go back to 3B if Peralta isn't hacking it there.﻿ -Joe McKim

I received a comment from somebody who said they're always waiting for my next video. Based on the account's Missouri Tiger profile picture, I can almost guarantee that they aren't able to watch my highlight video of yesterday's game.

And the one that has nothing to do with the topic at hand but still deserves recognition.
You can't tell me that this stuff is detrimental to Major League Baseball. Just to recap all the things these videos do for MLB:
It's not as though a three minute montage of Jeremy Hazelbaker hitting homers is going to make fans say, "You know what? I'm going to stop watching games now. Three minutes of Jeremy Hazelbaker is enough for me to walk away from over 7,000 hours of baseball a season; YouTube is enough." I know for fact that the exact opposite has benefited other sports. I also know for fact that baseball could reap the exact same rewards by allowing people to upload and enjoy fan-made videos.
If you want to make change happen to help both fans (yourselves) and the game we all love, this next section is for you.
Here's a template if you don't want to write your own message.

Hello,
My name is ___, a fan who is concerned about Major League Baseball's YouTube policy. I think MLB should use social media to increase its popularity and prosperity. Your current policy restricting me from uploading and enjoying fan-made videos is hurting the game I love so dearly. Various bloggers have written about this issue in more depth and I would appreciate it if you gave them a quick read.
http://www.vivaelbirdos.com/2017/6/14/15803708/youtube-and-mlbs-war-against-its-own-fans

I understand that Major League Baseball is a company looking to make as much of a profit as possible, but not allowing these videos to be posted is actually costing the league money. I urge you to strongly consider changing your policy regarding fan content use.